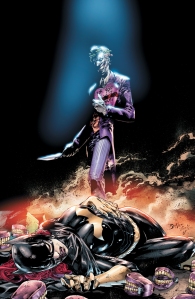 I’ll admit now, my dalliances with Barbara Gordon once she became the wheelie cool Oracle pre-52 was a “just the tip experience.” If Babs helped Bats, I was all over her L33T hacking skills, but as for her soo adventures and time with the other gals of Gotham – not so much. I have no regrets from a canon perspective, but I am woefully heartbroken and mildly embarrassed to have missed so much of the scrumptious Ms. Simone’s musings until this late in my comic collecting career.

I read BATGIRL #1 last year, but I’ll admit my analysis was rushed at best. There were a lot of titles churning out that month and my diligent commitment to broad coverage made me rush through the adventures of the now mobile Barbara. Also, I was carrying the butthurt of change into the reading experience, so no matter how wonderful Babs new life was I was damned and determined to scoff at her miracle of newfound mobility. Yes, even though she was no more than a necessary Google search to me before.

I realized the first error in my choice to shun Babs, inside the pages of BATGIRL 0 2 months ago. Then I had even more egg on my reviewing face with BATGIRL ANNUAL #1. Sweet Jesus what a beautiful tale about a lady Talon and the Frenemy relationship between BATGIRL and CATWOMAN. Finally, I was drawn into the die-cut cover that sat atop BATGIRL 13 heralding the beginning of “Death of the Family.” And even though the story was a wrap-up from the prior arc and had less Joker in it than the premiere of The Dark Knight Red Carpet, I was still moved by the relationships Barbara had formed in her life and fearful at the prospect of Joker once again darkening her doorstep.

When I received this week’s offering of Bat Fam Death, I immediately bragged about my new treasures on Facebook. About an hour later Dan Didio wrote me with the sage advice, “Read BATGIRL 14, you won’t be disappointed.” Despite my new infatuation with Simone and Batgirl, and the ringing endorsement from the EIC, I still went to my safe place inside BATMAN 14. It was great, stupendous even. Alfred is still being held by the Joker, and being subjected to some wonderful torture involving eyeballs and shock treatments. While Bruce and Dick are so fearful of being watched they speak in code even when alone and Harley Quinn becomes more unraveled as each of the Joker’s plans come to fruition.

It was BATGIRL 14 though that delivered the true terror as well as the spark of insight I needed to see what the Joker has in store for this bat-bonanza. Despite this being a new 52, we’re all rolling with the fact that at some point in the last 5-12 years Barbara Gordon was shot by the Joker and spent time paralyzed. The whys and hows have changed (I think), but the terror of the event still haunts Barbara and the rest of the bat-family.

Speaking of family, it seems the Joker has finally found the Bats’ Achilles heel after all these years and it has nothing to do with Bats himself. While putting the lives of those close to superheroes in danger is a staple as old as comics itself (honestly how many silver age swords of Damocles swung over Robin and Lois Lane over the years), “Death of a Family” is making it personal by not only going after friends of the Bat, but their civilian loved ones as well. This twist of strategy for the most twisted villain in comics is what sets Barbara out into the streets of Gotham this issue in search of her dear old ma. There’s another player here in cahoots with the Joker, a man close to the Gordon clan who played a pivotal role in Snyder’s Pre-52 DETECTIVE story. This issue was gruesome and emotionally brutal thanks to Barbara’s internal dialog, but the little twist of Joker’s new little friend took the expected and made it extraordinary.

Ed Benes tore things up this issue, keeping the emotion high and the action even higher. I also think he found a way to make Joker’s strap-on visage even creepier than Capullo’s rendition.

It’s hard to quantify what makes Simone such a breath of fresh air for me, and I fear my reasoning might sound misogynistic, but alas here it goes. She has the ability to write strong female characters with the true voice of womanhood. It’s a voice where relationship is just as important as plot, where each action scene is carefully balanced with nods to how these events make the character feel. In short, women are far more concerned with the why of life over the simple what. And there is simply no better showcase of this talent than when a character is faced with their greatest fear as Barbara was this issue.

By my count I’ve crafted well over 300 comic reviews over the years, now I would like your help. Tell me the essential Simone’s in your opinion and why. I want more and I want the best to help keep my comic budget somewhat constrained. Help me TalkBackers and commenters, you’re my only hope.