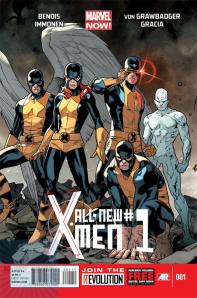 While I sill think the brand “Marvel Now” reeks of Marvel’s Mouseallini master, I can’t help but marvel at the enjoyment and ease in which this refresh has laced up and kicked the ass of the ever popular reboot.

For those who say nothing has changed, you’re wrong, they have. I will be more than willing to have the debate with you in comments or email. It’s a shift in tone, style and yes accessibility that holds a steep reverence for the old (at least for X-Men), but also welcomes new readers with open arms (and I’ll say that for more than just X-MEN).  There are movie fixtures in place (most notably with IRON MAN), but I would much rather take this Balls In approach to embracing the popular perception of titles than the staccato intrusions that occurred in the middle of ongoing story arcs (looking at you and the black suit Spider-Man 3).

From character to story ALL NEW X-MEN is really the all old X-MEN. But it’s still…exciting…haunting in parts and fresher than a vat of Summer’s Eve.

As the cover implies the original Fab 5 of Mutantdom are going to come face-to-face with their future terroristic selves. Yes, terroristic. Xavier is dead in body and ideology. Magneto’s dream won. Scott Summer’s dalliances with the Phoenix Force perverted him into that which he once despised most – he is now the shadow of Magneto and God help the human that gets in his way.

Before we get to the reintroduction of the 60’s group, Bendis opens with the most impactful introduction since Wheeden’s awesome ASTONISHING bedroom scene. Hank McCoy is about to undergo his third mutation, but this time his nine lives might have run out. Middle Age is a bitch and what one could once handle sometimes proves fatal. It’s a choice some will question, but most will scoff at claiming even Hank dies “he’ll be back.” I don’t know. There’s been a commitment to dirty mutie death in recent years and I actually believe this countdown clock of Damocles hanging over the series is real.

If this series has one simple mantra, it will be the search for salvation. Hank’s penance for robbing the world of his genius and heart far too soon, and the mantra of the Jean Gray school to redeem the soul of Scott.

Just as in that first issue 50 years ago, bad mutants (Scott, Magneto, Emma) and good mutants (Kitty, Bobby, Hank, Storm) are searching to help and recruit the latest outcropping of baby muties that were reactivated by the Phoenix Force. What’s interesting is the perspective time brings to the proceedings. There’s empathy now for the bad guys that makes the gray moral boundary of Magneto’s eye-for-an-eye approach inches ever closer to white than black. Clearly Hank and crew are on the side of angels since they respect all life, but the way they lose out on getting to two new mutants before Scott’s crew makes one start to wonder when pacifist simply becomes whiny loser. Bendis solidifies this theory with the juxtaposition of non-stop action in the Bad X-Men scenes versus the heavily talking head moments at the Jean Gray School.

Realizing the damned if they stop Scott and dammed if they don’t conundrum the good Xies are stuck in, Hank throws a hail Mary through the space-time continuum to get a young Summers to talk his self darkly off the Hitler ledge. By the way Bravo to Immonen for blending today’s art sensibilities with that of comics Paleolithic era on theses pages, a touch few more lines to the original five and a few less to Hank made the meeting naturally jarring – that’s a good thing.

Being a dirtie mutie lover, I love creative powers and our two new entrants into club mutie are no Maggot or Beak (power wise I mean, yes I love them as characters). We have a young lady that can now stop time in a controlled space and a healer…make that resurrecter actually.

I would ask that even Bendis haters pick this book up. I would say it’s his most comicky – least David Mamet like title to date. Very few trail off sentences and I would say even less quips.  Bobby’s a little heavy handed with the passage of time delivery, but I think it was necessary for any of the next generation picking up X-Men for the first time.

For all of us old timers, the passage of time was clearly exhibited in the first few pages.  And became even sadder with each passing moment. The X-MEN are in a crisis of world domination, but also friendship and faith.

Oh, one final rant if I may? I insist on character’s evolving. If Scott Summers is now “evil” so be it, but I insist it sticks. And If he ever comes back from the dark side it’s evolutionary, not a fucking parlor trick like mind control or dare I say sleeper Skull. He’s viewed the universe now through the eyes of a God; it would make anyone more of a “big-picture” thinker. That’s all I need.

Welcome Mr. Bendis, stay the course sir and I think this arc at least will be playing in such revered territory as Dark Phoenix and Days of Future Past.