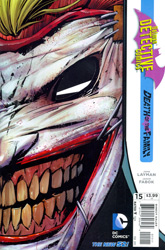 Here’s a little SAT question for you: DETECTIVE 15 is to “Death of the Family” like…

It’s not A, my taint is directly connected to my balls. It’s not B, Whitney has nothing to do with comedy. It’s not C, Serenity was a direct continuation of Firefly.

The correct answer is D. Why? Because like a Mohel, DETECTIVE 15 focuses on just the tip of this triumphant return of the Joker.

Remember that really cool scene in BATMAN 14 where the Joker strong armed the Penguin into helping him with his Machiavellian plan to destroy the Bat? I hope you do, because the Joker’s sole appearance in this book is a shadowy shot of his torso retelling the Penguin, “time to giddy up ole chap.” Well, there’s also the Joker’s face on the cover overlay, but I think you get my drift. If you’re following this series to see a ton of Joker moments, this is not the place to find them.

However, while short on Joker, DETECTIVE 15 is not short on story. Layman deserves a ton of credit for giving us a complete Freytag pyramid within the modern day page count constraints. One-offs seem to be a verboten phrase in the age of trade writing, but let us not forget this hasn’t always been the case for comics. In this day and age, writers feel that serial is synonymous for incomplete when it comes to individual issues. Layman’s story of unrequited love in this issue though, shows you can develop characters, complete their story and leave with a final cliffhanger for future issues — and no one needs to play friggin softball to make it happen (oh, sorry that’s the other publisher).

It’s been a long time since I’ve seen Clayface. The last story that really resonated was a DETECTIVE from  back in late 80’s where ole’ Playdough man had risen to the top of Gotham’s crime pyramid. These days his life isn’t so affluent and exciting. He’s now been relegated back this status quo of dumb muscle, which worked fine because this is A) a new 52 and B) the brains of the outfit is none other than the alluring Ms. Poison Ivy.

Usually Ms. Ivy uses her powers to simply control men for a short time and short term gain. In this tale though, she’s taken her evil female wiles to a new level of testosterone mind fucking – fabricated memories. That’s right, Ivy creates a whole other reality for Clayface where they have lived in marital bliss as a modern day Bonny & Clyde. Husbands across the land know that a man is much easier to control once he’s locked into wedlock. We either don’t want to be nagged or we want to get laid, either way it makes us extremely compliant. Which is perfect since Ivy is looking to repad her coffers one mark at a time.

As much as I love  Damian and the extended Bat family it was refreshing to lose the gimmicks and simply see BATMAN being…well…a detective.

There’s no tidy resolution to this story and that’s where Layman shines at just a slight taste of what’s to come. While Clayface gets to settle his score with Ivy, the Gotham underworld is left ripe for the picking with Cobblepot now a servant of the Joker.

For those that love BATMAN, but find enough sustenance in the other Bat titles (like yours truly) this is a wonderful little one-off to see BATMAN do what he does best. For long-time fans of DETECTIVE you will be in for a huge treat in coming issues with the rise of Emperor Penguin.