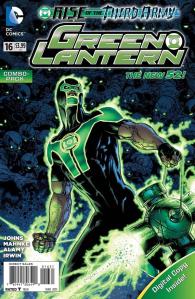 This week’s offerings of emerald might simply can’t be read apart. Well fine…I guess technically they can, but it’s like Donny without Marie (“Soldier of Love” anyone), Corey Feldman without Corey Haim (Meatballs XII vs Lost Boys) and Prince Charles without Lady Di (Camilla Parker Bowles is like fucking a lazy tranny – bowls indeed). Solitary existences are fine, but when the sum is greater than the parts and they both sit side by side on the shelf, why deny yourself the full pleasure?

Rise of the Third Army was bemoaned for its “eventyness” at the outset; especially in light of the fact the light brigade has been part of one “event” after another since the days of Rebirth. If we take away the marketing hype and the PR spin though, what the GREEN LANTERN universe delivers are simply great cohesive stories that just so happen to intertwine through three books. Personally, I’ve become immune to the 42 point font, marketing clarion calls on covers, no longer considering these “events,” rather simply the universal cohesion that makes the comics medium a unique experience impossible to emulate elsewhere from cost efficiency and speed-to-delivery.

GREEN LANTERN 16 finally answers (in part) the perplexing fan question of “Why Baz?” I’m not saying the curmudgeonly answer of meeting a diversity quota is wrong, I’m sure that was part of the decision to give this Michigan native the Sinestro/Hal Jordan hybrid ring. However, the measure of a man goes far beyond the color of his skin or whether he looks up, East, or West to find Mecca/God/Shaka Ri.

After last month’s tussle with the Guardians new prodigal sons, The Third Army, this issue kicks off with Baz somewhat exonerated for the van bomb that obliterated the abandoned automotive factory. This was of course only after his, and appropriately named FBI agent Feds’, Silence of the Lambs style hunt and chase with the true culprit. Now with the government off his ass, he can focus on learning more about the emerald power bestowed upon him and hopefully start protecting earth. Given the fact the Guardians training program is on official hiatus, the universes’ favorite chipmunk B’dg takes the place of Killowog in schooling Baz on all things Lantern. Of course, B’dg was coming to earth to get the man Hal Jordan to assist in thwarting The Third Army, but few have yet to realize Hal and Sinestro shuffled off their mortal coils a few issues ago. Thanks to the Ring’s 8-Track though, both Baz and B’dg learn the final fates of Sinestro and Hal and now have another mission to add to their queue.

Chipmunk jokes,  an rational explanation on why Baz is still wielding a sidearm along with the most powerful weapon in the galaxy, and a tender moment with family are all part of Johns’ recipe of goodness that fans love. It’s these character moments inside the wrapper of universal implosion that have reinvigorated GREEN LANTERN under his charge. It’s a recipe, in my opinion, all comics should follow. Without the dance between the microscopic moments feeding the macroscopic plot, a story will seem hollow or boring. GREEN LANTERN remembers that the entropy facing the universe only matter when you care about the people heading for the abyss. 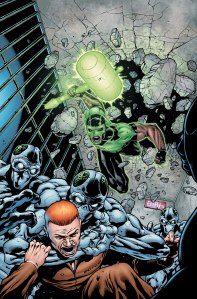 GREEN LANTERN CORPS 16 is another wonderful exploration of this zoom-in and zoom-out effect I just mentioned. Tomasi wonderfully takes the baton from Johns and starts CORPS a whisper after the events in GREEN LANTERN 16. As has been the case with the past issues of CORPS since the New 52 explosion, the book centers on the doings of Guy Gardner and John Stewart in their battles against The Third Army.

John’s story is the easiest to encapsulate so we’lls tart there. He’s basically trying to remain under the Guardian’s radar as they strip GREEN LANTERNS of their wonderful toys. John is also trying to learn what happened to the remains of the GREEN LANTERN planet, Mogo, as he’s presently being used to power a world destroying device (and in an interesting twist, regain sentience). John’s mission is trying to save the universe, but also find a little self-redemption for enacting the final solution against Mogo so many months ago. I never get tired of Stewart, he carries as much emotional weight as Hal Jordan, yet gets half the air time. I’m glad to see CORPS rectifying that.

If we look at the book chronologically and sheer presence of page count, Guy Gardner ends up the focal point of issue 16. Stewart’s interlude keeps the main plot moving, but Guy’s moments are the most memorable.  Stripped of his power ring and held in detention for being mouthy without a ring to back it up last issue, we kick off with Guy in the pokey. His alliterated siblings pay a visit to their jumpsuited brother only to be interrupted by the third army, Baz and B’dg. Again, the movement between books was seamless, but if you’re too cheap there is exposition that will get you up-to-speed on why Baz and B’dg have come looking for a ringless lantern. Basically, any port in a storm. The issue ends with Baz, Guy and B’dg moving off to overturn the guardians, thwart The Third Army, and somehow pull Hal and Sinestro back from the great beyond.

I’m all for sub-universe cross-overs. Again, I won’t even call them cross-overs, it reeks too much of an “event.” All titles within a specific “family” should play “just the tip” with the happenings of other books. The Rise of the Third Army does go deeper than normal cross pollination, but each book is rewarded for this, not hindered. The Rise of the Third Army is GREEN LANTERN at its best, which says a lot given the delicious biscuit wheels on this gravy train have been moving non-stop now for almost half a decade.

Ahh yes, I should also mention Mahnke and Pasarin did their usual amazing jobs on art duties with cinematic angles and truer angst on character’s faces as doom descends upon them. Of special note though is the same seamlessness of art between books that we had with story. Their work apart can be close, but usually not this close. Which makes me beg the question “Isn’t it tough to draw while spooning?”