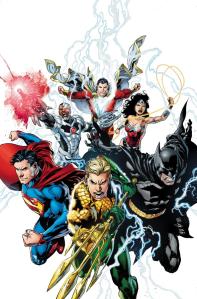 by Rob Patey (aka Optimous Douche – Ain’t It Cool News)

So apparently the JUSTICE LEAGUE script has shit the bed. Finger pointing is currently aimed at Warner Bros. Studio Execs. I’ll buy this as maybe half the problem. The other half rests squarely on the fact that NO ONE is looking at the one thing that made AVENGERS the billion dollar baby.

I’m sure Will Beall is a nice guy. My parents loooooovvvveeee Castle. But what the hell makes this guy qualified to write a JUSTICE LEAGUE movie? Has he read all of the new 52 titles? What about DC Universe before the New 52 (you know, the continuity that ALL of the rest of the world outside comic geeks knows and understands). 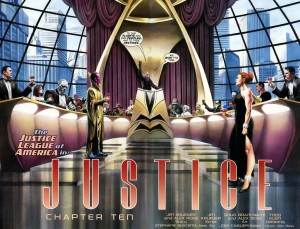 Walk down the street and show anyone the word Darkseid and they will look at you like you are illiterate especially after you pronounce it for them. Now, show someone the words Lex Luthor and Joker. DING DING DING! Instant recognition.

Now to round out a one-to-one villain ratio for the rest of the team we will have to travel outside of public awareness, but if we make them cool enough it could work. Green Lantern can take on Sinestro. Wonder Woman has a whole cavalcade of slippery siblings to battle, personally I like Eros. And of course Flash should take on Captain Cold. Finally we might see a frozen city in a DC movie that doesn’t look like it was created from cellophane.

Get a GEEK. Hell Get a Gaggle of Geeks 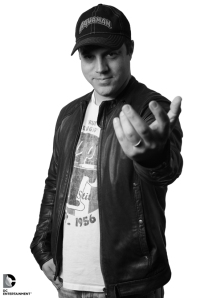 Again, Joss Whedon is what made AVENGERS so damn good. Likewise, Christopher Nolan loooooves comics, so DARK KNIGHT couldn’t help but be win sauce. Why does Hollywood insist on employing writers like Will Beall who have nothing to do with comics? What formula are they using as success?

Warner Brothers owns a whole cavalcade of successful writers who actually UNDERSTAND COMICS. Walk out into the bullpen and go, “Who wants to write a movie?” I’m sure you will get takers.

Once Jim Lee pulled himself out of the New 52 JUSTICE LEAGUE equation the book became really good.

How about it Mr. Johns? Want to write a movie? 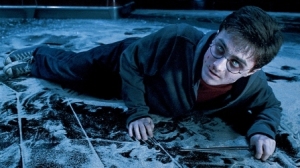 It will be too damn hard to acclimate Betty Lou Sue, from Bumbfuck, Arkansas who was born in 1998 to the world of comics in one movie. Twilight, Harry Potter, hell even the next two chapters of The Hunger Games showed that a movie can be split into two and succeed.

Or go Lord of the Rings  and film it as a trilogy. You will need to set-up: who these characters are and why they fight their respective villains, bring the villains together, bring the JUSTICE LEAGUE together and finally battle for the world.

Of course an engaging script will also be required, but with these three steps in place pretty much a mongoloid could write this thing.