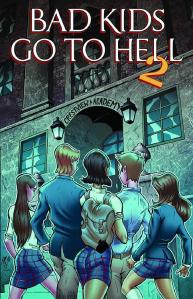 The BKGTH guys are going to make this a really easy review for me because my slugline still holds. This feels all 80s in the themes of copious gore fused with High School sex and drug fueled drama. The kids have changed (slightly), but the upper-crust Crestview Academy is still the place where pampered brats meet untimely fates one Saturday detention at a time.

While the kids are still the same thematically, their grab-bag of petulant issues has been tweaked for differentiation. There’s the bad girl who thumbs at convention by shitting in the top of a convertible, the freak who lets her freak flag fly by stripping down at a school soiree, the one who seems like overkill since she only pushed a girl into the pool at the same soiree, the drug addict who is also shamefully rejected by his parents for being gay and finally a senator’s son whose mouth seems to be his best weapon and worst enemy.

What’s also different this time around is the lack of curses and mystical injun burial grounds that I felt slowed down the first tale. It was a fun red herring, but now that the veil has been lifted we need evil to take on a more tangible form. For mystery though, the gents did a backward story tell this time with our last remaining student at the end of the day brandishing a flamethrower against police.

Will she be the culprit of demise this time? Doubt it. Too easy and apparent. There’s a host of other characters that could be behind the poisoning and smoosh smoosh that takes out two students in this inaugural issue. Everyone from the school’s second in command to the headmaster himself could be responsible, only time will tell.

One artistic note to be mentioned here, the cover is a complete 180 from the material inside. It’s a ballsy move to go this polar opposite. The inside is nowhere near as Scooby Doo as the front art. Williamson has a very representational style, which is exactly what a book like this demands given the debauchery. I don’t know about you, but I don’t ever want to see the Cartoon network version of a coke whore.

I also noticed that headmaster Nash has been transformed to bear a striking resemblance to actor Judd Nelson who ended up playing the part in BAD KIDS GO TO HELL the movie, available now….everywhere it seems.

Is BKGTH 2 a deep book? No. Ground breaking? Hardly, my hands were green from the pasticheios in this book. But is it fun? Yes. Cathartic watching the douchebags you hated in school meet their untimely demise? Hells yes! A complete unleashing of the male id on to the written page? Indubitably!