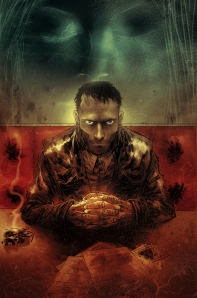 Layers…when you read a JMS book, the main story is never the whole story. TEN GRAND imbibes this Straczynski staple as it transcends planes both mortal and nether in nature.

No, I don’t mean Joe Straczynski. We all know him. SUPERMAN: EARTH ONE, SPIDER-MAN, RISING STARS, SUPREME POWER… If you haven’t read these books, go now. You’ve been missing good comics. Plus, you’ll have time since TEN GRAND 1 doesn’t drop until May. No, the Joe I refer to is Fitzgerald, the protagonist of TEN GRAND who miraculously leads 3 distinct lives in this series opener. We learn about where Joe is now, where’s he been, and where he is going in perfect exposition form. Once a gun man for the mob, he now works on the side of angels — literally. Where’s he going? Some very very very dark places.

When Joe was “alive” he was in love. So in love he was ready to forego his chosen profession and start anew with his Juliette. Joe takes one last job to get enough cash to get out of town, unfortunately for Joe, but fortunate for readers, this last mark was much more than just a bad person. This mark was actually the embodiment of evil, a demon from the depths of hell that lays waste to Joe and his woman in seconds flat. Instead of crossing over though, Joe is visited by an angel. An angel like we think of them; ethereal, beautiful and presenting Joe with an offer he simply can’t refuse.

Joe is allowed to remain on earth even though his love is not granted the same stay of execution. However, the angel tells Joe that he can have five minutes with his woman every time he dies moving forward. Here’s the catch, Joe must die a virtuous death to be granted these five minutes.

But these are all events from the end of the first issue. TEN GRAND actually begins, in the gutters of the city where the disenfranchised dwell.  Before we learn one whisper about angels and secret pacts, we learn Joe is essentially a champion of the down trodden. Now, even though he’s their champion he’s also a bit of an urban legend. His first client, a young woman trying to find her sister who recently ran off with a group of new-age religious nut bags, is honestly amazed that this man exists upon first meeting. Even more amazing is that her miracle worker is rife with the same salty comments most middle-aged people throw at the young instead of just gruff grunts and nods. This was a great scene to humanize Joe as he applauds the young woman for not overusing the word “like” and also rides her for over using her face as a pincushion. It’s a conversation I’ve heard a million times and truly works in humanizing the book before it goes off into the realms beyond normal human understanding.

So, why TEN GRAND the title? That’s the price to hire Joe for help. Why TEN GRAND as a monetary value? Because as Joe explains to the young woman, it’s not too much to keep people asking for help, but just enough to weed out the nut jobs and those that might ask him to do a job of less than virtuous intent. He doesn’t count the money, because he doesn’t need to. It’s not about the money; it’s about ensuring the sincerity of the task at hand so if things go south Joe is at least guaranteed five minutes in paradise.

From here is where we start to learn of the angels and demons amongst us. Before things get too feathery though, JMS does another great grounding moment by having Joe circumvent a dead-end in his search for the cult by using the language of angels to unlock the truest Easter Eggs the Internet has to offer. Again, it’s not a big moment, but one more amazing beat to make all of the fantastic events feel real.

Templesmith’s art fits the morose tone of JMS’ words to the tea. There’s really not much to dissect or analyze here, Ben is THE MAN to draw TEN GRAND.

Delivery dates have plagued a few JMS titles in the past. There’s no reason to hide it. However, Joe was never fully in the driver seat. Now, it’s truly Joe’s Comics, he’s not just the writer, but also the editor-in-chief setting the schedule as he recently illuminated to me in this lengthy interview. I read this first issue of TEN GRAND way back in January – and I mean a completed cut of the book. You know what; I’ve also read issue 2 and issue 3 is actually already set in rough cut. So I can keep some wonderment from my childhood I respectfully decline reading anything but what’s going to the printer. For the scheduling challenged out there, this means that TEN GRAND is ready with issues today that won’t ship until August. I don’t know of any comic company this far ahead of the game.

I also give you a little whisper of a clue from issue 2. Remember that Angels are first and foremost soldiers and the only thing separating them from demons is altitude.

I’m a JMS fan through and through, but I’m an apologist for no man. I was as pissed off about THE TWELVE as everyone else. Again though, to paraphrase a quote the great Alex Karras in Blazing Saddles, “Writers are but a pawn in game of life.” Hence I think why we see so many writers jumping the corporate ships to reach the shores of autonomous publishing these days.

One part detective story, one part a tale of love, and one part angelic mind-fuck, look for TEN GRAND special editions at C2E2 in a few weeks (lucky bastards, all I have is a god damn PDF) and the full release this May.