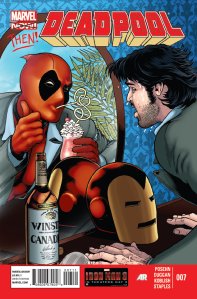 We all have guilty pleasures in life and DEADPOOL is mine. He’s gone through many iterations over the years, but no matter how dire his circumstances he always retains a healthy dose of snark and flippancy towards the doings around him.

My fellow @$$hole Spoiler Alert podcasters call me the curmudgeon of our little circle because I often balk at the jokey titles, the ones that follow the Catskills comedian bar-um-pum cadence. I realized after reading the past seven issues of DEADPOOL I don’t actually hate humor. I hate stupid hokey humor; if it’s biting and at the cost of others sign me the fuck up. I don’t hate joy; I simply find it in the dark recesses of the human soul, the place where humor is often inspired from the flaws of others.

DEADPOOL under Posehn’s pen has been an exercise in pure satire since issue 1. The first arc that completed with issue 6 had DEADPOOL battling the legion of dead Presidents. It wasn’t just all Taft stuck in a bathtub jokes, the overarching theme was dare I say….smart? Once arisen from their shallow  graves the Presidents decide to take over America, because well…we all fucked it up. Granted certain moments were silly, and I’m never a huge fan of breaking the 4th wall, but just like when I go to a live comedy show I’ll allow for a few duds if the rest is gold.

With DEADPOOL 7 Posehn and Duggan provide some cannibalistic satire with rapid fire shots at the very medium they publish in. Right from the cover the boys decide there are no sacred calves by scratching out the NOW under MARVEL with a well-placed THEN. That’s right kids, DEADPOOL for whatever reason, goes back in time 30 years to…well…just because…stop asking so many god damn questions.

It all kicks off in what the box outs refer to as the end of comic’s golden age, i.e. the early 1980’s. Think about it, even though it’s not the official Golden Age, with all of the reboots and resets it might as well be. The book actually opens sans DEADPOOL in the offices of the Daily Bugle. Peter Parker basically comes in and confesses his entire secret identity while J. Jonah is ranting about something or other. It’s a great nod to those days before Peter was a super scientist and kind long Johnson about town, these are the days when he was just an ignored dork. It’s also where Scott Koblish shows some amazing pencil talent being able to recreate that era with flawless detail and moderate zipitone.

I knew we were veering into my brand of mean spirited humor when Flash Thompson pulls up to take Pete to lunch and parks in a handicapped spot. Of course Flash is callous as Peter eludes to his faux pas, but DEADPOOL’S quip as he drives off with Flash’s “Smokey and the Bandit” style T-Top firmly dictates why this title is not for the crowd that drinks from the well of political correctness.

Flash forward and we finally get to the main story, not a critique just a fact. I honestly could have lived in the land of clever lampoon for the whole book without a “story.” Essentially the omnipotent DEADPOOL is back in the Reagan era to sign a contract with a devil (not THE devil). The contract is a hit…of sorts and here we see insensitivity layer number 425 inserted into the book.

Why does the demon look for Iron Man to become a scotch soaked rust bucket? Basically it’s in the best interest for a group of “oh so 80’s looking super villains” looking to scorch the West coast in a nuclear blaze. Here is where the gang shows a bit of confusion about history or simply they are too young to remember, but it showed a definitive wrinkle in time.  3 Mile Island happened in the spring of ’79. If this in fact the 80s everyone was already terrified of the billowing stacks. If it’s late 70s, then PowerPack would have been zygotes. Again, not a big deal and I wouldn’t kick the book out of bed for blowing crackers (or something like that). This is just a cautionary for when one decides to dabble with the space-time continuum.

There’s a moralistic light at the end of the tunnel after a few more well placed guffaws, which frankly surprised the living shit out of me. Iron Man gets drunk, but Tony doesn’t. Then after getting bamboozled by DEADPOOL, our demon friend is whisked back to hell and we get our final “oh I feel bad about laughing at this” moment with DEADPOOL asking the demon to say hi to Uncle Ben.

This is a ballsy book for Marvel to produce, especially with one final cameo by a certain mutant from the 90s looking for a mechanical arm. It’s the finger that points out every white elephant in the room. It’s also mean and without remorse, but utterly fucking hilarious. If you’re the type of person that can laugh at your own and others’ misfortunes, then DEADPOOL is a siren’s song beckoning you to read more.