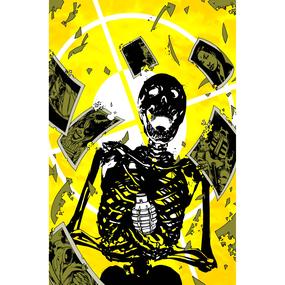 There’s a lot to say about SUICIDE SQUAD: Bloody, morally void, a sociopath buffet. One thing I would not have ever called it is a psychological drama…until now.

Welcome aboard Mr. Kot, you packed in more characterization in this issue than the entire past 19. I’m not slamming Glass, he provided a great action adventure with smidgens of the sanity behind the lunacy. It was a fine and entertaining direction.

This is definitively something new though: King Shark trying to break the bondage of his lizard brain, Harley Quinn actually showing smidgens of Dr. Quinn psychoanalyst woman, Voltaic…well he dies so forget about him and last but not least Deadshot. A man being subjected to a Clockwork Orange style reliving of horror.

Actually all the anti-heroes are being subjected to the whims of Amanda Waller. She not only has shed a good buck twenty from her frame, compassion and humanity have now been relegated to a pre FLASHPOINT universe. She’s trying to break the team in what one can assume is under the moral compass of rebuilding them for the better. Her delivery mechanism though, is an evil of the heart and complete corruption of the soul.

Now for the really cool part, her helping hands in this Machiavellian scheme is a character I have tried desperately to care about and one I care about very much and have  been waiting for him to get on-going spotlight in a book. Unknown Soldier just hasn’t done it for me, sorry. And I won’t say Kot made the bandaged monosyllabic one interesting, but he certainly used him interestingly. Now the real good stuff for me was Amanda’s accomplice in designing this scheme to peel apart the team’s cerebellums – none other than James Gordon Jr.

Now I may be impulsive here. I do have a small concern that we’ve only seen James in the context of torturing long loved characters like the Commissioner and Barbara. Kot will have to show the same level of malice towards anyone that crosses lil jimmy’s path, we’ll see if it works.

Zircher works a little too well with blood, I hope never too meet him in a dark alley.

If you haven’t dug SUICIDE SQUAD in the past, now is the time to come in, it’s a whole new tone. If you liked SUICIDE SQUAD before, you’ll appreciate this chance to see your favorites unwound.

One thought on “SUICIDE SQUAD 20 REVIEW – WTF A Month Later”