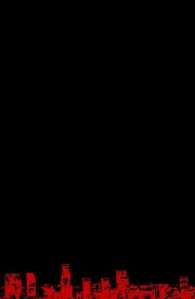 The best way I can describe Neil Gibson is the product of Wes Craven prison-taking Rod Serling. Neil crafts stories with “twists” that are morose, despondent and a stark reminder the ultimate goal of the universe is cold entropy. TABATHA is Gibson’s first foray I know of into an ongoing serial, and he has successfully blended his TWISTED DARK vignettes of soul draining surprises into beat moments of ever page in this tale of dumb as fuck robbers in suburban Los Angeles.

TABATHA plays on a couple levels of the human spirit. Greed, lust, love and charity all collide, but none are delivered as expected. For greed we have our four unlucky protagonists of Luke the mailman who cases empty houses so he and his cohorts can rob them blind. Unfortunately they hit a snafu when they break into the house of a retired SFX guru who is lusting to transfer the title’s eponymous sex doll TABATHA into a real woman. Luke gets caught in the first issue break-in and is now being held hostage by a mad man.

It sounds convoluted, but Gibson keeps it from being cumbersome through naturalistically letting the characters motives and personalities shine above the premise. It’s a much appreciated and often times hilarious juxtaposition to lighten the gore and depravity of the villain. There’s a Brotherly love that comes across effortlessly as Luke’s Brother Fin tries to once again save his baby brother from the clutches of Dr. Fuckenstein. Fin’s partner Baily and her brother Ty are ancillary, but their addition adds a level of sympathy since the gang is doing most of their dirty deeds to pay for an operation to save their Mother. Plus they give Ty someone to interact with as he formulates his rescue plan for Luke.

Much of Gibson’s talent comes across in the dialog. Part of me wants to type it all out to entreat readers into giving this guy a shot, but I know that’s an egregious crossing of spoiler boundaries. Suffice to say, when you have lines discussing the defiling of a sex doll for laughs, the earnest belief that a real woman’s brain will animate a sex doll or vice versa, the slow dismemberment of limbs and trying to score a gun in East LA through legitimate channels hilarity will ensue if your soul is steeped in darkness.

I was half and half on Caspar the friendly artist’s work. On one hand his cartoony style was more than sufficiently creepy in close-ups, but this wasn’t carried through in the wide angles. Ugly, cute, ugly, cute made for a somewhat disjointed experience at times. I know I just basically applauded this cadence in the writing so I guess I’m a hypocrite, but I expect more evenness from artists.  If he made every background like the gun shop where Ty tries to legitimately get a piece to save Luke I would not be writing this paragraph.

Gibson is a rising talent, go to his Facebook page and you can see the likes of Frank Miller, Samuel Jackson, and a bunch of other Comic Brits enjoying his Twilight Zone like anthologies TWISTED DARK. If you find yuck-yucks in dismemberment and love the Monty Pythonesque malaise towards life’s atrocities look no further than TABATHA.