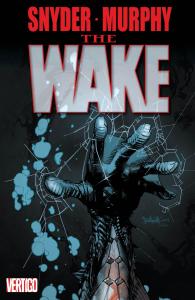 I apologize now for donkey punching the spoiler of THE WAKE while you weren’t looking, but there are those who prefer immediate gratification and I felt a long heady piece in me when I conjured my original first paragraph. At the center of THE WAKE is sentient life from the sea. Now, that’s the surface – the sea foam that slathers the book. The joy in THE WAKE is deeper than the fathoms traversed to meet the humanity’s first alien life form. That is if it’s actually an “alien.” More on that in a second.

I  guess I’m obliged to say this is a great book,  but anyone who has read Snyder’s pantheon of titles and books like Murphy’s PUNK ROCK JESUS will know that even if the concept is lackluster it will still be a great book with these two on it. Honestly, both of these guys would have to have a stroke and eat a bag-o-roofies to conjure crap and even then there would still be a few panels of genius. But THE WAKE is a cool concept that goes beyond a Mer-Man and is simply another sterling example of Snyder’s versatility. While he has a leaning towards horror, his ability to mute it for all age books like BATMAN and then ratchet things back up to adult level in books like AMERICAN VAMPIRE and now THE WAKE makes every book a surprise. Some writers can be good, but they are trapped by their own tone. Snyder’s only constraint is a lust for research; he lets the characters set the tone. THE WAKE is the perfect culmination of these two tenets and as a result provides a different experience than any other Snyder book.

It helps that THE WAKE isn’t straight horror. It’s a meld of horror, mystery, Sci-Fi and post-apocalyptic goodness – almost an amalgam of the entire Vertigo brand rolled into one. The main characters of THE WAKE are going to leave you scratching your head, especially the contestant behind door #3. But I think that’s kind of the point. Though each lives in their own time period; the present, 200 years from now and one-hundred thousand years ago – each is intertwined after only a few pages. Snyder also unfolds THE WAKE in a non-linear fashion, making each clue about the Mer-Man’s existence relate back to pages you just read and has a far reaching scope that affects the entire world from years before and years to come.

We open in the future, where a wind rider glides across a flooded city. She has a pet dolphin that was assimilated by the Borg that’s helping her look for…something. We then move to the brunt of the story in present day where we meet our other heroine, Lee Archer, a woman who cares more about studying whale song than spending time with her son. Archer is contracted (read as involuntarily drafter) by the NSA to join a team that consists of mythologist, a man of mystery and her former boss at NOAA to meet our Mer-Man…sing it with me now…unda da sea. Character 3 our head scratcher is a cave-man from a hundred thousand years ago who scribbles on a cave wall and then gouges out his eyes with a piece of tech way more than advanced than anything we would have a hundred thousand years from now. Confused? It’s OK, I’m not Snyder and his characterization does a hell of a lot of grounding to make these high level concepts grounded and relatable.

Murphy crushes it on pencils; his ability to create such unique faces and shapes given how “scratchy” his lines are is simply amazing. It’s not easy to convey water, especially so many shots under the waterline, but he does it and does it well. There’s also terrific use of scope in this book, from the broad open waters to the confines of submarines there’s a juxtaposition that makes the scary moments even scarier.

About six years ago I predicted that Geoff Johns would be placed in an editorial position at DC. Actually it was more of a request, but we’ll call it a prediction. I’m  now making the same soothsaying statement about Snyder, THE WAKE proves to me that Vertigo’s next Karen Berger is sitting in the DC office already. He simply needs to spend a little less time with capes. Get THE WAK and show Vertigo we still love her, because she damn well deserves it.