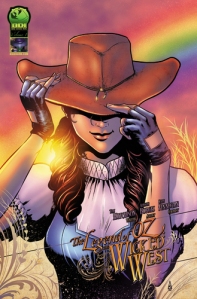 Giddy up munch-pokes for the rootenest tootinest ride to OZ yet. Toto is now a shiny black steed, those fancified ruby slippers are now spurs and a host of other tumbleweed correlations await inside THE LEGEND OF OZ: THE WICKED WEST. Yes, we’ve been inundated with Baumbastic takes on Ms. Gale’s adventures over the past few years, and some have been less than stellar, but that’s the modern fate of public domain ideas. New interpretations though, especially ones as original and gorgeously illustrated as this version, should not suffer for the folly of others.

I shouldn’t have to say this, but I feel I need to; you need to have a fondness for OZ if you’re going to imbibe Big Dog Ink’s take. Like SUPERMAN, if you hate the property I don’t believe any interpretation, no matter how good, will sway you to the positive. For me, OZ was my first foray into a lifelong love affair with musical theater. Before I could be trusted to sit all the way through a Broadway show, my Mother and I would settle down each spring to watch “The Wizard of Oz” and “Sound of Music” on TV. Flash forward to college, I was one of those freaks from the theater department who enjoyed popping some magic mushrooms, kicking on the VCR, hitting mute and then cranking up Dark Side of the Moon on my state of the art CD player. Even with this affection though, I’ll admit the only comic interpretation I have really enjoyed prior to THE WICKED WEST has been inside FABLES.

It’s a fine balance when you change or update such a beloved story. You need to be original, but not so original the transformation feels forced or unrecognizable. Despite my forced intro of Western slang, Big Dog Ink is guilty of no such crimes. All of the changes make sense and are combined in a compelling if albeit familiar story.

BDI has a branding challenge ahead of them. I discovered this title at this year’s Wizard World Philadelphia. They bought a very prominent booth right off the show floor’s main artery. The only trouble was that the gang was about 100 feet away from the only other comic company big presence table – Zenescope. On first blush, to say the two bear a striking resemblance is an understatement. They both have lush covers with lovely ladies on the front. They both imbibe horror and they both serve to empower not just the female form, but also the spirit. It also doesn’t help that Zenescope just released their own updated (but very different) take on OZ. Just to be above the board here, I don’t invoke Zenescope because I’ve written for them, I do this to serve the people.

Now, I will say if you have disliked Zenescope in the past that shouldn’t sway you from giving LEGEND OF OZ: THE WICKED WEST a chance. Unlike Zenescope, the quality of art continues all the way through this book from cover to special features. Zenescope tends to pull out all stops on the cover and then offers a frightful experience at times on the inside.  I got lucky with my book, but not all can say the same. Borges talents shine on every page of this book and while there are a few shots of Dorothy’s more supple parts, they are always covered in chaps or burlap and it’s no more egregious than any otheur comic on the market.

As for the story, to draw out all of the transformations from fantasy to Ole’ West would ruin the book. As I said though, ruby slippers are now spurs and a set of six shooters that blast ruby bullets. The Scarecrow is no longer an idiotic man-child, but rather a silent squaw who muteness is mistaken for mindlessness. I downright and absolutely refuse to illuminate the Tin Man since he was one of my favorite characters in the piece. However, fans of the Western genre can figure it out pretty quickly.

What I will say is that Hutchison did a great job skipping the fluff. Twister to the true arduous part of Dorothy’s journey is handled in a few short pages. No time is spent wasted in Munchinkin land, though they are referenced a few times as the catalyst for Dorothy’s journey. Likewise with the death of the West’s sister. We don’t see the barn take her out, we merely here about it. Since I was reading a five issue trade these events might have happened in issue form, but I’m not certain. In my opinion these moments were fine to leave out for the compilation though.

What I found most equally engaging as the characters was OZ itself. This wasn’t a 3 hour musical romp to find the Wizard and solve all problems. Dorothy has been in OZ for 3 years after she gets whisked away by the twister. In true old West fashion OZ is a desolate and barren land. The Yellow Brick road is a piecemealed mess from people looting it. Likewise with the rest of Dorothy’s stops in her journey, this is a dusty and dirty OZ. An OZ a girl from the Midwest would really conjure as opposed to Hollywood’s sugar coating of the experience.

I really enjoyed this book. It wasn’t earth shattering or rife with deep thoughts, but the updating was original and the morality lessons enjoyable in Hutchison’s old west speak voice. If you love OZ get this book. If you only like OZ, I still think you’ll get a thrill since  THE LEGEND OF OZ: THE WICKED WEST VOL 1 is a very well-crafted comic book.