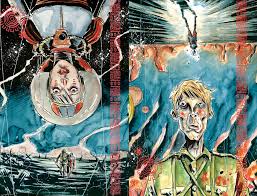 Jeff Lemire is once again Le Awesome in the first episode of his 8 part series TRILLIUM. While I’ve enjoyed his in-continuity work on books like JUSTICE LEAGUE DARK, his true genius is served when working on his creator owned properties.

Also, his stories are best served by his sketchy art style. I laugh as I write this because it was that style that once made me at first shun his last series SWEET TOOTH. Honestly it wasn’t until an interview op with Lemire came to us that I bothered to read the series right after the first trade came out. All right, maybe it was also the fact I wasn’t able to accept a borderline diabetic deer boy could be interesting. I was wrong. I actually think I pissed Jeff off a little with my close to the mark guesstimates on where the series was headed, but I couldn’t help myself. Gus, the soulful harbinger of man’s doom sucked me in, and I cared so much for all the characters I was aching to know what would come next. This is a testament to Lemire’s ability to capture the human existence on page at the same time he delivers us to a world so unlike our own. Few accomplish this, focusing instead on the spectacle of something different. Lemire remembers that spectacle is only spectacular if our protagonist guide thinks so as well.

TRILLIUM is another tidy encapsulation of Lemire’s trademarks of the human condition colliding with WTF scenarios. This time he leaves behind Mother Gaia…sorta…to show us the last bastion of humanity amongst the stars. 4,000 humans remain…sorta…see, there are two series happening here. The “flip-book” nature promised in Previews is different than the past portrait to landscape shift Lemire did on SWEET TOOTH. No, TRILLIUM can be read front-to-back or back-to-front.

I started (purely by accident) with the Scientist part of the story. The year is 2797 and as I mentioned humanity is in its last breaths of existence. We are at war as we often are, except this time the enemy is not ourselves or some damn dirty Cylons. We are being chased down and eradicated by a sentient virus. The only thing to cure this virus is a plant called Trillium. Unfortunately we can’t synthesize the plant and the greatest natural source is protected by a bunch of aliens who we don’t understand. We tried to understand them and as usual we fucked it up royally. Nika our scientist is a lovely young lady trying to repair that damage with a translation program. On one of her scheduled visits with the aliens her contact is nowhere to be found so she enters the compound to find a shit ton of Trillium and an old Incan temple. That’s right, halfway across the galaxy sits one of earths or at least man’s oldest artifacts. When Nika is compelled by the aliens to climb the temple, she is in a dense jungle where she runs into The Soldier.

William’s story is far more action oriented. He is a soldier suffering from a heavy case of PTSD from his time during the trench warfare of WWI. With the war behind him and the roaring twenties just getting started (I’m assuming England roared during this time as well), he’s a man looking for purpose. When at an exhibit on surprisingly enough filled with Incan artifacts, he believes he found his new mission in life. So it’s off to the jungles to look for a temple that is a verboten and dark place.

Have you made the connection yet? Of course, William’s tale ends at the same place as Nika’s, with the two staring at one another.

This is Sci-Fi at its finest, an amalgam of everything we love – time travel, space, alien races and of course the most important element of how humans process these stirring events.

Lemire has another winner on his hands if for nothing other than how all of these events will play out. The fact that I already feel something for these characters is the proverbial icing on this delicious cake. I’m already lamenting the fact this series is 1/8 over. I appreciate finite stories more than the endless characters these days, but on the same token I’m greedy and when I hold a winner in my hands I never want it to go away.