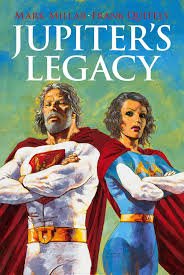 While the comic purists like to deride Millar’s work as superficial pastiches, I challenge them to spew their vitriol at JUPITER’S LEGACY. Yes, it’s another story of comic commonalities taken to hyperbole, but now Millar is putting these themes under indictment – and us as well.

I don’t mean “us” as in the comic community (that was 1985), I mean the collective us that is society. This tale of the Great Generation of heroes being dethroned is as much a cautionary tale for now and tomorrow, as it is a tale of what never was.

Western culture is in trouble, whoever doesn’t want to admit this fact better be on the ATF watch-list to survive the great thud when our recessions become full depressions (personally, I ordered my ass some Chinese Rosetta Stone). Western culture is in the same malaise in JUPITER’S LEGACY, but this world has capes to slap them out of the mire – whether through old fashioned tactics or the modern-day pill popping culture inspired “quick fix.” And therein lies the rub and the overarching theme of JUPITER’S LEGACY. The oh so Kryptonian like Utopian is fighting for truth, justice and the American way (including an unwavering belief in “the system”), while his Brother Walter and all of the “kids” in the book truly believe the heroes have the answers to what ails humanity, politics and petty squabbles be damned. Of course the problem with this, as explored in countless Elseworlds, is that the rest of humanity will need to be subjugated and willing to abandon free-will.

So how does this book differ from a KINGDOM COME type tale? The answer is simply generational. There was a proactive nature in KINGDOM COME, where those Gen X heroes looking to supplant the Golden and Silver Age heroes went after what they wanted with gusto and fervor. Now, the kids are lazy as shit. These twenty-soemthings live in a malaise of media consumption and passive debauchery until someone tells them…wait, make that shows them and guides them down the path of succession.

As for this issue itself, this is truly the climax of Freytag’s pyramid. Chloe ends up on the run after a brief visit to move back home turns into an attack on Mr. and Mrs. Utopian from Walter and the rabble rousers. Chloe escapes with her baby daddy through some clever teleportation jumps and some hilarious carnage. The fight between the Utopians and their usurpers is a brutal bag of carnage cleverly played out thanks to Walt’s ability to control the mind. Whether the favorite son of Utopian, Brandon is being controlled by Walt remains to be seen. But for now the appearance is just that Walter is a Rasputin merely whispering kill words to inflate Brandon’s ego and incite him to fry his Father’s face off.

While Quitely draws some stark images during the battle, what really resonated was the quiet before the storm when Utopian was talking to Chloe’s baby-daddy about the plethora of reasons he won’t let a drug pusher raise his grandchild. Again, it’s another societal theme we see all too often these days. How many Baby Boomers are day-care for their kid’s kids or just outright raising them because this generation can fuck, but certainly can’t live with the repercussions?

Another theme that came to light before the lights went out for the old guard was the need of a secret identity. The Utopian is a garage mechanic completely unknown to the world at large, living in a quiet suburb. This is different than the Clark Kent model where he was almost as famous as his secret identity. Utopian lives a true dual life as a simple auto mechanic. I think this makes way more sense than being a reporter. It’s much easier to duck out from a carburetor repair than during a press conference given by the President. He does this as much for sanity as for safety as he so eloquently describes to the man courting his daughter.

Next issue promises to jump us ahead 9 years into the future, and herein is my only complaint with this book and I guess Millar as a whole. There is a certain lack of depth to the Millar World oeuvre. I would say JUPITER’S LEGACY is the “deepest” piece to date given the material, but I know the ride will be over shortly and thus my skin in the game is just as shallow. I would like to see Millar challenge himself at some point with his own consistent and persistent universe, one where it feels as though there’s a long-haul instead of just a pitch for a TV series or movie. I think Millar could truly take his already astounding success to the next level if he just follows the advice of Saturday Night Live by “simmerin down now” just a little bit.