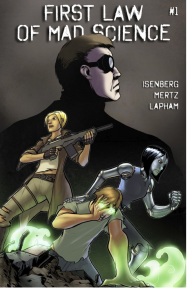 Writers: Mike Isenberg & Oliver Mertz
Artist: Daniel Lapham
Publisher: Norean Labs
Reviewer: Rob Patey (aka – Optimous Douche Ain’t It Cool News)
While I’m in possession of all four issues of this indie darling, alas review-time is not as bountiful for me. So, rather than waiting yet another few weeks past my discovery of FIRST LAW at New York Comic Con, I’m going to err on the side of expedience over volume.

FIRST LAW OF MAD SCIENCE is hands-down my favorite true indie right now. When I say true indie let me be perfectly clear here; Image, Dark Horse, Boom, Dynamite are not indies. Indie isn’t (or shouldn’t) be judged on print run. Indie has no corporate structure, no barriers of creativity and trade marking to hamper it – it’s a passion play of love and devotion not knowing the monetary outcome from your endeavors.

When I met Oliver Mertz at NYCC, I truly thought I was walking into a hot mess. But I love train wrecks, and his carnival barker-like pulling of the herd to his table was far too energetic to ignore (and trust me, I ignored a lot of other tables pulling even zanier stunts). I was also unsure how the book would feel in execution based off of this paraphrased description: “In the future, cybernetic eyes have been developed that allow people to have greater vision akin to microscopes that can also perceive different waves of the light spectrum. Already a commodity inside the head of two thirds of the world, what happens when these eyes start to play horrible tricks on us?”

Mertz was correct on the plot, but what he forgot to mention was the true humanity that drives this sci fi story. He forgot to mention the amazing family dynamic he created for this science clan of mom, dad, son and robot sister R.A.C.H.E.L. He also forgot to mention how artist Daniel Lapham drew the living shit out of this book, making black and white some of the best renderings I viewed this week. Hell, I’ll go one better: it was black and white on par with the book SNAPSHOT by Jock. I couldn’t imagine this book in color because it would simply smother and ultimately suffocate all of the painstaking pencil and inking work. It’s not really a book about cyber eyes; from issue 1 and the bit I’ve gleaned out of issue 2, this is a modern day LOST IN SPACE. FIRST LAW OF MAD SCIENCE is the story of a family with the DNA to change the world, and ultimately get pummeled by fate and perhaps their own hubris. 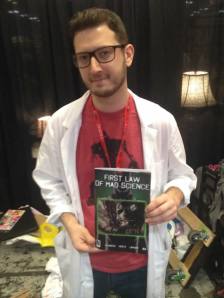 Dad, our erstwhile inventor, is distant. Mom, an archeologist with some paranormal abilities, is really distant–all the way in Antarctica, actually. The pre-teen son is trying to impress Dad by doing some of his own weird science, but it’s really “sister” R.A.C.H.E.L. that steals the show. She’s a sassy bot who is our true first step in android advancement. Personally, I think creating a robot with the personality of a teenage girl is the definition of insanity, but she was way more interesting than that annoying piece of shit Vicki from SMALL WONDER.

Now, all of this would be a pretty boring comic without some kind of threat. Like our parents taught us, if something is too good to be true, it probably is. Instead of crippling migraines or everyone seeing their grandmother naked, the downside with cyber eyes is they make little green monsters appear that like to mess with things, kill people–you know, all the usual green monster stuff. The trouble at the outset is no one can record the little bastards in the act using their cyber eye cameras, leaving many question and few answers…in issue one, at least.

To me, that’s the hallmark of a good comic: just enough understanding of the now, a little mystery set afoot for that issue and a grander mystery that no one can really suss out in just a few pages.

I don’t say this about many indies, but these guys need to get picked up. Yes, I have a few more issues of FIRST LAW OF MAD SCIENCE awaiting me, but I know these guys are crowd funding each effort. Someone with some publishing muscle give this book a look so I can get issue 5 before the next comic apocalypse, please.