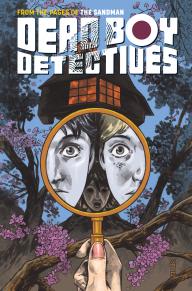 I’ve found myself in a circular lament recently. My dalliances with SANDMAN have been a backwards affair of half regret and half I wouldn’t have it any other way. I have still yet to make it all the way through the original series, currently slowly and deliberately making my way through issue 21 as of this writing. I have however traversed many of SANDMAN’S spinoffs – OVERTURE, LUCIFER, DEATH, LITTLE ENDLESS and now DEAD BOY DETECTIVES. I wish I was more world aware when I was younger, so I could have traversed everything chronologically as it came out of Gaiman’s glorious brain pan, but I’m glad I waited because the years under my belt allow me to fully appreciate all of the levels in this masterpiece universe.

Even if you’re like me and have yet to make it all the way through SANDMAN, chances are you have met the Dead boy Detectives in one of the many anthologies Vertigo has churned out for Holidays in recent years. These vignettes helped whet the appetite for this book, but none captured the true essence of these toe-tagged Hardy Boys with such concise conservation of words as page one, panel one of their own book.

“The young lady had swooned away and was now deeply unconscious.”
Edwin Paine

“The babe was out cold.”
Charles Rowland

Without reading SANDMAN, before you even know why these two ghosts are hovering above the body of a young woman in burglar’s garb in the back of an ambulance – before anything – you know who these two characters are in spirit (pardon the pun) and practicality.

Of course as the issue goes on we learn that the young woman is the daughter of performance artists, whose latest stint of pretension to steal Van Gough’s “Sunflowers’ has placed their offspring on the cusp of death.

We also learn that the Dead Boys love to unravel a good mystery, but Charles especially can never turn away from a damsel in distress. This is why the Dead Boys stay by the young woman’s side even after they rescue the painting. Because in her dream state between life and death, she caught a whiff of these two spirits detectives, and the whisper of their demise.

The Dead Boys met their untimely fates in different eras, but both of their mortal coils were shuffled loose at St. Hilarion’s academy. We’ve seen this academy before in the GHOSTS Halloween anthology Vertigo put out, but never caught the true gist of the atrocities committed there all under the sadistic hand of an immortal headmaster.

This seems like a lot for one book, but nothing ever felt heavy nor did the story ever slow down. Exposition and character introductions moved as effortlessly as Dead Boy Detectives across the air.

Part of this grace is Litt’s spot on dialog and pacing, but we can’t forget Buckingham’s ability to pluck a writer’s brain pan with High Definition clarity. Buck is less dreamy than in FABLES and using a far more simplistic style to tell this tale. Much less lines, but no loss of clarity – whispy yet never dewy.

Someone recently posed the question on Facebook, what comic would you give a kid these days to get them hooked on the medium? I know the flash bang of books like JUSTICE LEAGUE tickle the same parts of the child mind as primary colors, but for as many hyper babies are out there, you can’t negate the Wednesday Adams of the world. Some kids are ready to explore the icky side of life (like death), and DEAD BOY DETECTIVES delivers this message without lowering itself to the base and banal nature of life’s true atrocities.

Now, I had back to SANDMAN to meet the DEAD BOYS for the first time.