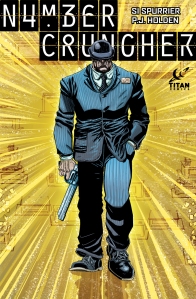 I had a very diverse religious background growing up. Catholic Father, Presbyterian Mother and a gaggle of Jewish friends (so many in fact they nicknamed me the Goy Toy). Despite this great theological mix I never found faith. My most comforting view of the afterlife and the answer to the great question of why came from Albert Brooks’, “Defending Your Life.” The movie basically made limbo EPCOT Center with the scale of judgment on our souls handled like an episode of L.A. Law. It’s important to understand my background because it gives context into why I enjoyed NUMBERCRUNCHER so much. I’m a man who finds peace in math and logic, even though I truly suck at number crunching. So, when you tell me that St. Peter is an accountant and God is merely a supercomputer calculating differentials, it warms my heart over any harps or stupid halos.

Well, it warmed my heart on the first few pages that is. Then I remembered my 1300 SAT score was carried 90% by the English side of the bubble sheet. You see, in the world of NUMBERCRUNCHER, you need some Hawking level skills (and I don’t mean with a Speak & Spell) if you want to escape the endless recycling of souls.

Before you think this is a lesson in calculus, you should know that NUMBERCRUNCHER isn’t all about math. In fact, I saw this as more of a love story than anything else. Well a love triangle to be specific, but to go forward I need to take a step back.

With math come rules, unbending and unwavering rules. The record keeper of these rules is our curmudgeonly St. Peter mentioned before, but the enforcers of the rules are the bailiffs. They’re a group of sad sods who were tricked by other bailiffs into eternal servitude for the Cosmic Accountancy office. Each bailiff when not enforcing the rules of the cosmic machine with their probability guns spends the rest of their time trying to sucker other souls into leaving the great machine’s soul recycling and become bailiffs themselves. One such Bailiff, Bastard Zane, is our protagonist and narrator into the specifics of the NUMBERCRUNCHER world. The antagonists (or maybe protagonists depending on your view) are a young couple in love.

The year is 1969; Jessica Reed is a young freewheeling hippy. She stands vigil by the bedside of her boyfriend, Richard Thyme, a brilliant mathematician who fortune put in the wrong side of the gene pool. When Richard passes at far too young of an age, the dirty ole’ Bastard Zane is his guide back into the soul recycler of the Cosmic Machine. Richard has other plans though. He agrees to go back in, but he wants to retain all of his memories of the life he just left so he can find Jessica again back on earth. A sub-plot that is vaguely reminiscent of the Robert Downy Jr. movie, “Chances Are.”

While our surly St. Peter agrees to the deal, it doesn’t come without caveats. For one, when Richard dies again he needs to become a bailiff for the rest of eternity. The only way out of this servitude is the Zero Clause, basically meaning he must live his life without sin. Sin being as subjective as it is, makes the Zero Clause very appropriately named – no one has ever been able to leverage it.

Richard comes back, but he comes back now – plus that ole’ bastard St. Peter decides to have Richard be reborn a world away in India. All of this means that by the time Richard is old enough to find Jessica again, she is on death’s doorstep since she’s now in her late eighties.

Bastard Zane, thinks he has a lock out of Cosmic Accountancy servitude, but Richard was already one step ahead by striking the same recycling deal with as many bailiffs as could ensuring each contract negated the one prior. So it continues…Richard keeps getting recycled with all of his memories and keeps trying to find ways to get close to Jessica whether he’s reborn in 1920 or 2020. Bastard in turn keeps popping Richard off with his probability gun.

Now, the part I found most soulful in this book (when I wasn’t laughing at Bastard and Richard’s game of cat and mouse) was the torment caused by love. Imagine each time you got close to a person, truly come to love that individual, they died in the most horrific way possible. Even if you had one loss in your life, you can guess the exponential torment caused to Jessica by Richard’s need to cheat death through math.

I won’t ruin the end of the book, but let’s just say Richard wins…and he doesn’t win. He does however learn that love, true love, is about sacrifice and sometimes the best way to love someone is to basically leave them the fuck alone.

PJ Holden made some interesting choices with the art, abandoning panel boundaries in heaven, but giving structure to earth. I was also surprised to see the book come half black and white and half color (B&W in the celestial, color on earth). I could have sworn after I highlighted this point in my very very early review of issue 1, Titan told me my comp was an unfinished version. Perhaps I misunderstood or perhaps this is another case of the Jock book I reviewed where so many people complimented the black and white the team just decided to forego color. I’ll roll with misunderstood since I can never believe the words of one reviewer will ever wield that level of power. Suffice to say, I like the choice and I’m glad it didn’t change from the comp.

If you find yourself bored with tights and capes and looking for a sweet and sour take on love, NUMBERCRUNCHER adds up in every way imaginable.