IT departments have had a love/hate affair with Android since the first time the Google’s Green Guy raised his antennae: they loved the devices for themselves, while loathing the idea of end-users having access to such and open and flexible mobile OS.

In the early days of mobility, this fear of Android was a good survival instinct for these warriors of the firewall frontline. No forced email encryption…an App store rife with nefarious blackhats trying to capture data…and more fragmentation than a jigsaw puzzle when it comes to device type and OS version were all strong signs for IT to beware. 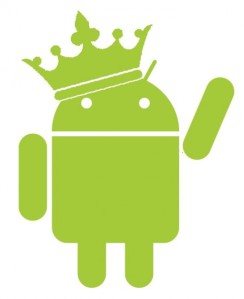 Today, management tools for mobility have assuaged those initial techie trepidations to make Android smartphones and tablets a viable entrée for enterprise palpability that can sit right beside Apple’s iOS. Recently, Fiberlink, an IBM company, scoured the millions of devices currently being managed by their Enterprise Mobility Management solution, MaaS360, to see just how Android is enabling enterprise mobile productivity.

When looking at all Android usage across MaaS360’s platform, smartphones trump tablets 84% to a paltry 16%. This stat isn’t really rife with surprise since email is the original killer app and since leaving behind the dark days of 2.0 the OS has become infinitely more secure.

However, IT still needs to be wary. Even though the Android OS lives in a 4.0 world, many users have yet to leave behind their elder operating systems for fear of change (and updating a slew of apps and other logins). This requires IT to use some form of Mobile Device Management to get these OS laggards up to current standards using policy controls for security and mobility management sanity.

Device diversity has always been a hallmark of the Android OS. It’s this wide stratum between high-end and more affordable manufacturers that has made Android the clear consumer choice across the globe.

Currently the Android device leaders in the enterprise consist of:

The top 5 make up 90% of all Android devices in the enterprise, and include:

While a short list, it’s broad enough that IT seriously needs to take a minute when considering BYOD programs allowing Android devices. Despite sharing the same “engine” each of these devices are very different under the hood. To make an impact in the market, all of these devices share their own unique features and custom baked apps that IT must decide either to allow or block until work is over. From the useful Samsung SAFE feature to less than useful bloatware beleaguering other devices, all features must be part of an enterprise mobility planning conversation.

The diversification of Android is only going to continue if the rumor’s flying out of Mobile World Congress 2014 hold any credence. With the Nokia X Window’s skinned device Android device representing the low end of the market and Samsung’s possibly waterproof, iris scanning S5 feature bonanza at the high end, the Android management challenge for IT will only increase in 2014. Fortunately, Mobile Device management solutions have also evolved in line with devices, experiencing their own evolution from simple device watchdog programs to fully enabled Enterprise Mobility Management protecting devices, apps and content.