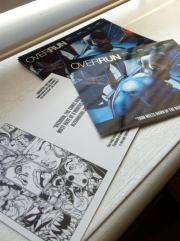 Anthropomorphizing is a solid staple for comic books. It gives writers a freedom and flexibility to exponentially increase their character head count of human intrigue beyond the bipedal. Traditionally this trick is used with animals or I guess teapots if we’re talking Disney, but what about all the geeks of the world who shun the physical and find solace in solely interfacing with the bits and bytes of this modern age.
Well, there’s Tron and the Matrix. At least that was my first thought when Ewington first slid some of OVERRUN’S artwork my way in Mid-2013. What I slowly began to realize though as I interacted with the spoiler site and finally got my hands on the first 24 pages of this what will ultimately be a 114 page opus, was that computers have grown up – along with our understanding and comfort with them.

The characters of OVERRUN morph data to our current understanding. The denizens of “the city,” which is basically yours or my computer, aren’t as nebulous as the simplistic bits and bytes that ran the OS in Tron, nor as heady as the intricate destiny engines of code that compiled the Matrix (If you understood that shit in parts II & III, drop me a line would love to pick your brain). OVERRUN’S files consist of and embody those files that we interact with daily: .xls and .doc walk the city with their suits and briefcases, .MP3 range from hipsters to hip-hop stars, SPAM files in various states of undress and hocking V1agra and the worst of the worst the infected files.

The over arching story is of course one of corruption in the literal and metaphorical senses. The CPU is as dirty as the day is long and he is ensuring lower levels of his processor – the dirty parts – are going to be wiped from his pristine version of the city.

But as we all know, sometimes those older archaic files are the ones that bring the most joy. Here is where the book imbues a ton of heart as we get a brief meet and greet with the characters live in the dirty subroutine slums of the city. They are short on currency (KBs), but their friendship sustains them (along with piling together some funny for a few drinks at the Scroll Bar. Ewington and Woodley drop quite a few other of these computer puns into the book. I’ll admit some are groan worthy in their punny design, but quite a few others are damn clever in their physical representation.

The art of OVERRUN is jaw droppingly stunning. I never heard of Paul Green, but I’m sure I will many many times in the near future. He’s hyper stylized to be sure, but that’s not a bad thing as long as an artist remembers real body poses as opposed to a cacophony of pin up art action in every panel. The sheer amount of detail put into each page must have taken Green months upon months to conceive and design.

My only real complaint with the book is in the lettering. The bubbles are a sharp neon green and the text is white. Not the best choice for the mildly color blind or the middle age. I can handle it if it was just one character, but instead it is a convention for any dialog. Perhaps in later issues, if the team is married to a color wheel bubble, each character gets one in tonality with their personality. Or…you know…white on black isn’t a bad choice either.

I could easily see OVERRUN fitting in like a snug 3.5 floppy at a company like Top Cow from an art perspective. The story isn’t sultry or horror enough unless the Big Moos brand wanted to diversify. Other contenders for pick-up would be the likes of Boom or hell even Image, since they have no theme other than great stories. For now though, copies can only be obtained at the upcoming London Super Comic Con. With OVERRUN and the wonderful 45 penned by Ewington a few years ago, I have a feeling these limited copies across the pond will become collector issues as the marks of the early years in a storied career.