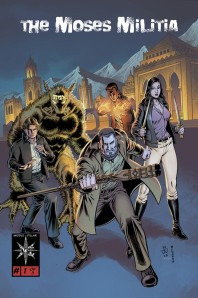 I’m one of those weird gentiles; I’ve spent more time with Judaism than the Christian double whammy of Catholicism and Presbyterianism practiced by my parents. My friends in school called me the goy toy, and I went to way more Bar and Bat Mitzvahs than confirmations growing up. While not one of the twelve tribes (though I did direct them once in Joseph’s Bitch Ass Colored Jacket), I don’t take any guff or dial-ins when leveraging Judaism in comics. I wanted to check out MOSES MILITIA to ensure there was no one out there propagating bullshit stereotypes. I loved MOSES MILITIA because it not only avoided stereotypes; the authenticity of this book is batamt.

Set in the thick of WWII, THE MOSES MILITIA takes us to the land of Casablanca mystique, Morocco. Only this time there is no Bogie or Bacall, but there are a plethora of Nazis. In this reality Hitler’s henchmen are comprised of magic wielders creating undead Middle Easterners and an even bigger monster akin to the Sarlak in return of the Jedi.

But who are THE MOSES MILITIA? Well, we spend a lot of time getting to know them as they make their long sojourn across the Atlantic from the US. Their powers are definitively original, and none of them are so powerful that any scuffles will ever be easy or contrived. First, there’s the leader “Moses” Kurtzman, so named because of his magical walking stick that can generate an impenetrable force field. Second, we have “Volcano” Shapiro whose fiery powers are only slightly less combustible than his bravado and arrogance. Next up is the lone lady “Delilah” Levine, her beauty or her mind control powers are in a tight race for her most dangerous asset. Lastly is the newest member of the team, the 16 year old, Jackie Divine. Jackie comes from a lineage of “Craftsman” or golem creators. Jackie’s on board, well, because it was OK to endanger children in the early 20th century, and because his Grandfather has become to elderly for battle, while Jackie’s Father has already shuffled loose his mortal coil.

Babbo wisely chooses Jackie to be our POV in meeting the rest of the team. Smart move, since we have a lot of questions and so does Jackie. Putting anyone else in the driver seat of discovery would have felt forced and contrived.

After the introductory flight the team spends the rest of the night getting ready and meeting contacts amidst the Casablanca nightlife. It was during these scenes where writer and artist deserve the most credit. Not only did they make a night on the town more interesting than an X-Men softball game at the personal level, but they were also able to throw in a few harrowing moments as well so we could get a small taste of our heroes’ powers.

One last note before I go sit shiva again this weekend for Damian Wayne, the art is SPECTACULAR. Which, isn’t surprising because somehow Babbo was able to coerce Marvel and DC vets like Wylie on pencils and Mark McKenna on inking to join the squad.

MOSES MILITIA is not just a book that presents an often overlooked group in comics (c’mon all we’ve really ever had is Kitty Pride), but it’s also a joy of comic book and glimpse into history.