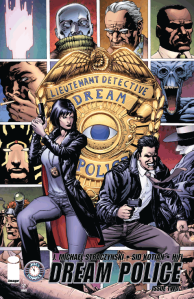 I don’t review enough second issues, and companies like Image truly need this sort of PR given their deluge of new titles cropping up. See, there’s this dirty little numbers game with comics, issue ones get so much PR love they sell like gangbusters, you can then watch subsequent issues drop in attention and sales quicker than Justin Bieber’s career.

In many cases this drop off is warranted, since it seems the muse du jour is to develop a tits concept that can be used as a TV or movie pitch, while letting the true intricacies of creating a long lasting serial come secondary (or even lower on the list). This is where I truly appreciate the Image sub-brands like Joe’s Comics and Skybound, it’s an extra hallmark that tells us the exec producers and/or writers are imbedded and dedicated to the comics’ medium as opposed to “get less poor” huckster one and dones.

DREAM POLICE is a title that does not deserve a drop off, and quite frankly warrants a second glance even if you found fault with the first issue. JMS’ exploration of detectives who patrol the land of dreams became far more fleshed out this issue, swapping out cute clichés about naptime, for some true world building, exploration and seeds of distress for our protagonist, Joe Thursday.

That’s right, Joe Thursday, a play on Dragnets Joe Friday. Here is one of those bugaboos purists had with the first issue. This type of word play along with when Joe was flipping through the jukebox in a diner where all of the titles were laden with the word dream really kicked up some vitriol amongst the review and reader community. Personally, if this land is a construct of where we humans go at night when our frontal lobe is on REM overdrive, I think this embodiment of the zeitgeist makes sense. So, fuck you other reviewers for not liking it, and suck on the story goodness I got out of issue 2 as reward for not being an elitist snob.

We learned in issue 1, that while this dream city might look like New York it is only a facsimile. Like other famous fabrications of real world places like Disney World, it takes a swarm of serfdom to keep the wheels in motion so the guests never lose their aesthetic distance. This issue is JMS’ chance to build his classes that consist of: our main cop characters Joe and Katie, who respond when dreams go south; the builders who meticulously craft our real-world settings and then immediately deconstruct them once we wake up (kind of like doozers without the Fraggles); the mighty morphing characters of our dreams or who play us in 3rd person dreams; and of course nightmares. There are others, but these are the big ones for now.

Also introduced in this issue is the high concept that the workers of this world were never once human, nor have they simply always “just been.” Essentially every being is “born” as a wisp and then sort of chooses its role when ready. They are functionally useless, but naïve and scamp-like enough to amuse the denizens of dream land so that they want to protect them. The mystery of this issue arises when one of these wisps is wiped out by a dreamer who can’t control his shit…literally. Junkie dreamers are dangerous, so dangerous in fact it brings out the middlemen between the dreamers and well…God.

I know it’s a lot for one issue and my play-by-play comes across as quite clinical. To balance characterization with creation, Joe Thursday is more than a simple beat cop pastiche; he carries a secret that could tear this and ultimately our word asunder. It’s the heart behind the high concept I frankly demand from a JMS title.

If you’re coming back for Kotian, you won’t be disappointed, he gets noir meets supernatural perfectly. The dans are square-jawed, the dames are delectable and the dreams are out there. If you felt wandering after issue one, this follow-up is your map. If you felt you needed more meat on the bone, then strap on your bib.