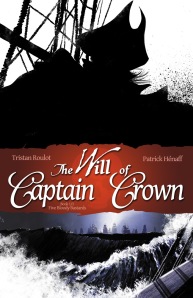 When Tristan Roulot wrote me last week about reviewing his foreign mega-success THE WILL OF CAPTAIN CROWN BOOK 1 and giving some lip service to the ongoing Book 2 Kickstarter, I had immediate reservations.

One: I have issues with the French. My exposure was one haughty teacher for 6 years who made the country sound like a bunch of people staring at paintings all day while eating bread. The only phrases I remember are, “Robert shut up,” “Robert close your mouth,” “Please pass the butter,” and “Eat my pubes.”

Two: Kickstarters are always 50/50 on quality. Even those that meet goal are suspect between book quality, and simply a group of creators who have family and friends with deep pockets.

Three: Pirate stories leave me more drained than “blind scurvy Steve,” that guy who keeps sucking on squashes instead of oranges. It’s not that I hate pirates; I just usually hate pirate stories. It took me two readings of WATCHMEN before I finally broke down and read BLACK FREIGHTER. I felt “Pirates of the Caribbean” the ride was unending even at 5, and the movie was only redeemed by Michael Bolton and Lonely Island. There’s just something about stories on the water that I find unfulfilling without special appearances by Charo and Telly Savalas.

So why did I relent to THE WILL OF CAPTAIN CROWN?

One: I opened the book because my lovely wife reminded me that to avoid hypocrisy in my life, I had to abandon all French comic predispositions after my glowing review of SNOWPIERCER. I can abide almost any flaws, never hypocrisy.

Two: One look at Roulot’s pedigree and Henaff’s art and you’ll quickly realize these guys are going solo by choice. This is Kickstarter in its truest form, giving amazing talent a chance to shape their destiny without having to walk the plank of exorbitant publisher percentages.

Also, Roulot has done a ton of books in his native French landia and now Canada land. In fact one of the main reasons the first Kickstarter took place was so that stupid North Americans could get the book in a palatable format. The foreign books are larger and thus give the page more room to breathe, to Mike TV miniaturize the books requires a long and arduous process of panel reshuffling. Keep dreaming of world peace you dumb hippies when we can’t even agree on a common paper size for printing books.

Three: This is quite simple like no other pirate story I have ever read. Deceptive twists and turns on every page helped steer this book away from the rocky shores of pirate tropes and general stupidity we’ve become accustomed to. The pageantry of piratedom exists, without the pomp. There’s whore a’ plenty, but these bed downs have grave consequences. There’s a ship, the Astarte, but this tale is more about her passengers. Finally there’s a Captain Crown, but he’s dead before the story begins.

THE WILL OF CAPTAIN CROWN is not about the indeterminable mettle of a sea captain against gargantuan gales and octopuses. Nope, it’s a legal document…parchment…native skin, whatever they used back then to write on. It’s also a cautionary tale about reaping what you sow. Specifically, don’t knock 4 women up if you give them your real name, because twenty some odd years later you are going to have a tsunami of daddy issues aimed at your booty (both literal and figurative). Another mistake the old Captain and his bed partners make is inventing the acting of fisting with his leprosy-laden hand. This is one trope I’ll definitely concede to the creative team. If one was going to update the hook and peg leg, I can’t think of a better impediment than a hand that induces vomiting and mars future generations. 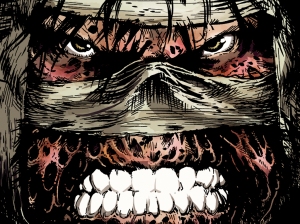 The Captain’s first mate, Red, is charged with rounding up the 5 heirs and then unveiling where the booty beyond the Astarte truly lies. It’s better served to let the book introduce the character’s personalities and interdependencies, because that is also the heart of CAPTAIN CROWN’S unfolding mystery. Let’s just say the Captain remained sexually active his whole life giving the kids a wiiiiidde age gap, he wasn’t racist and he would gladly bed ladies as well as street urchins. This left children who ranged from crazy to cunning and all of them with just a bit more psychological damage because of their touch of skin rot.

No one is what they truly seem in THE WILL OF CAPTAIN CROWN, but their false faces are just as interesting as their ultimate deceptions. Again, we’re talking about pirate folk here, so it’s not like angels falling from their lofty cloud, more like the worst of the world becoming wholly deplorable. If you love pirate stories this book is for you, the boats are beautiful and there is enough high sea haughtiness to remember the pageantry of these pirates versus today’s simple Somalia boat jackers. If you are adverse to pirate stories, this book is for you, because the sea only serves as a receptacle for family blood.

Book two Kickstarter is rolling now folks and almost funded, chuck a couple galleons at the boys so you don’t have to pay retail and probably Value Added Tax since the book is coming from exotic foreign lands.