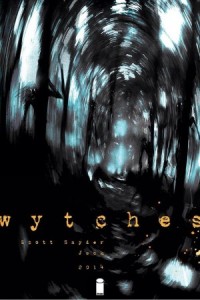 Before DETECTIVE and BATMAN, this upstart writing professor from NY (which even though I’m form Jersey I have never held against him), was entrenched in horror with a little title called AMERICAN VAMPIRE. Here’s a snippet from one of my reviews of issue 3:

“I originally came for King, but I have stayed for Snyder. As much as I will always love the master of macabre, his ability to bloat a word balloon is not the best fit for a visual medium. Snyder though, I think this guy has legs. Let’s see what happens when the King training wheels are taken off.”

So there it is folks, hate Optimous if you don’t like Snyder, I gave him his golden ticket (No, I’m not this arrogant, but I also predicted in 2008 Johns was headed for editorial leadership, just sayin).

Horror with heart was Scott’s introduction to comics, and WYTCHES has brought him home. Thank God DC squashed exclusivity last year, because after reading issue one of WYTCHES Scott is about to give some gravitas to the “Hocus Pocus” idea of Salem’s daughters and this time he can actually own the friggin property thanks to the lean Image corporate structure.

Of course, points and IPs are not the concern of us regular readers, so let me say that from a story perspective: Scott is building a mystery, he strengthens the true meaning of witches before Hollywood makes it more flaccid with insipid “Secret Circle” like shows, and delivers it all through the package of human experience as a young girl realizes just how dangerous she can be.

WYTCHES will be nothing you expect; yet somehow everything you have been asking for in this mythos. I loved last season of “American Horror Story: Coven,” but I realize now how pretty and sanitary the proceedings actually were. For Snyder’s WYTCHES, the wills of the earth are power, not confidence or how may times you get banged by the Sax man.

The one staple Scott missed in this issue is his deep reverence for history, and making the time or place of the story as vibrant a character as any carbon based life forms, or perhaps he has simply made it different this time around knowing that Jock is just as formidable with pictures as Scott is with words. While we don’t get any new history for Gotham or an exploration of the century we just lived, there is a primal introduction on page one as a woman is devoured by a tree. As Jock makes us more afraid of wood than a straight guy in a revival of “Anything Goes,” I believe Scott may be scratching under new surfaces of setting and letting his well-accomplished artist do the heavy lifting.

Because after this moment we shift back to normality, with a normal family on any normal weekday, waiting for the school bus to arrive. As middle aged Dad and teenage daughter play the last wisps of games from childhood (like kill the Hippogryph), Snyder and Jock both convey the underpinning of a great horror that casts a dark pall beyond the simple separation of young womanhood blossoming before a befuddled Father who now has a young woman instead of his tomboy buddy.

We find that the dark pall was the fact this young lady, Sailor Rooks, was the one who brought the lady eating tree to life.

And there’s the mystery folks: Sailor remembers the tree and bringing to life to thwart an attacker, Mom and Dad say it was a delusion (but are most likely lying) and let us not forget the freaky bald guy who has come back from helping Wesley Crusher explore the galaxy to now fuck with the Rooks in some very primal and disgusting ways.

With Jock and Snyder, quality is expected. With Image though, we all know that longevity is a never a guarantee. Not to open the comic Kimono too wide, but Image books get one arc to prove themselves on sales numbers, if they don’t make the mark than hope you weren’t too attached to that story. Of course with this baller marquee on the cover, I believe WYTCHES will have the current staying power of SAGA with the long draw editorial is letting Snyder play. He is letting points breathe instead of spewing them out en masse. This is not a critique; it’s a compliment to see what a creator who I admire and respect can truly accomplish when untethered from continuity shackles, family friendly mandates and larger story support structure.

The question of do you like it Optimous is moot and I still refuse to answer it point blank, so please stop asking folks. I love this book, but that’s an opinion and opinions are like assholes in that they usually stink and are utterly invaluable. Make your own decision. Are you ready for an old look at a new favorite in the horror genre? Do you have room for one more book on your pull list? Do you want staying power of story and the slow doling out of story versus flashes of character moments? If yes, than get up on WYTCHES bytches.