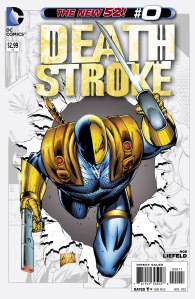 I come here to praise Rob Liefeld, not to bury him. Because quite frankly it takes a man who possesses epic courage to cast a smug burn-victim smile to the heavens with an outstretched middle finger decrying “I defy your cursed order of the universe God, Yahweh and Sha Ka Ree!”  Most living organisms find this defiance arrogant or lazy, but I’m with comic publishers and Robert Kirkman that these other 99.999%ers are just too stupid to appreciate genius when they see it.

Get ready kids, because DEATHSTROKE 0 is the perfect swan song to Rob’s career at big-bad corporate overlord publishers and an epic testament to Rob’s particular permutation of the anti-life equation.

We’ll start with the expected complete and reckless abandon for the properties of physics. There is panel-a-plenty of people miraculously running on air as Slade Wilson begins his training days in the special services. Seriously, feet simply don’t touch the ground in the Liefeldverse, people are propelled merely through the sheer will of gritted teeth.

Want to see someone shoot over their back, look no further than Mrs. Deathstroke, Slade’s too hot for any branch of the armed services, training officer, and future wife. Seriously there’s a panel with her bent over backwards – IN HALF – shooting targets behind her back. Hey, I get this is comics and someone shooting over their back without looking at the target is pretty bad ass, but most morons out there believe bad ass simply becomes ass when she does this with one leg in the air, one arm shooting in the sky above her, while the other gun shoots forward, and did I mention she’s BENT IN FUCKING HALF while she’s falling backwards. Despite this feat of kama sutra she hits every target. This is imagination with a capital I folks, if you want a real representation of gravity and logical progression of events, you need to look at every other book on the shelf, you uninspired troglodytes.

This bendy back leads me to Rob’s next feat of daring in defying the natural order of life, the 360 degree joint. No, this isn’t a commune of hippies who pass the dutchie on the left hand side. What I refer to is Rob’s ability to transform human joints from a hinge into a gyroscope. The most egregious example of this is the recent GRIFTER cover where Griff’s (hehe Back to the Future II FTW) hip bone is clearly constructed of silly putty, but DEATHSTROKE doesn’t disappoint on this front either. Limbs defy reason, probability, and necessity as DEATHSTROKE begins his transformation from regular soldier to super soldier. Crash through a window legs are akimbo. Crash through a door, legs are akimbo, and when falling from the sky a sitting position is always the most efficient way to go down if impact with the ground isn’t a factor. This is why many paratroopers are often recruited from the ranks of those with the softest and most malleable bone structure, and they train for hours a day sitting and standing – standing and sitting. If you have osteoporosis, Uncle Sam wants you today.

Fuck Darwin, humanity’s future is not found through genetic diversity, but rather a sameness of features so that the only discernible way to tell people apart is through facial hair. There are two types of heads in Liefeld’s master-race, which consist of the square angular jaw or the perfect oval when heads are covered by a mask. Forget the fact that these masks have the tensile strength to transform the prior square jaw into an oval shape without suffocating the wearer. If you want to pontificate things like breathing and the extreme pain this must cause anyone who wears one of these Torquemada branded costumes go sit in a science class nerd! We should also be thankful for the genius of Liefeld’s renderings, because without him the world never would have had Frylock.

All of this is old hat though, pick up a book from 1996, 2006 or today and you can see these creative choices in spades. To mark the truly special occasion that is DEATHSTROKE 0, Rob has defied a brand new law of nature – time.

Before reading DEATHSTROKE I presumed most human beings perceived time in a linear fashion. This simply goes to show how stupid I and the rest of humanity truly are. Liefeld shows us that a man can and should age at will. I can only assume the aging process is random since DEATHSTROKE goes from blonde to gray and back again about five times in this issue. He’s gray before his wedding day, blonde during his wedding and then back to gray…wait, fuck he’s blonde again, no wait, gray. Perhaps I’m being presumptions in thinking DEATHSTROKE’S cellular structure behaves like a chronological yo-yo based on hair alone, since his face doesn’t age one iota. Perhaps in the New 52 Slade Wilson is simply the master of hair color disguise.

Time also stops after the age of twenty-two in the Liefeld verse. As DEATHSTROKE’S children, one who becomes his partner and one who is shielded from his bad bad ways age, Mrs. DEATHSTROKE remains untouched by time’s icy scythe. Her breasts remain firmly affixed to the top of her clavicle in her forties just as they were in her twenties.

For all of you old stuck in your ways comic purists, you’ll be happy to hear that Rob provided almost four backgrounds in this issue including a rendering of the moon that is completely circular. Now where you haters will probably want to attack Rob is the fact the moon is completely flat with nary a crater to be found. Personally, I agree with Rob, the moon would be so much prettier to look at without all of those dark blemishes and actual features.

So there you have it folks, the mastery of DEATHSTROKE’S prequel as seen through the eyes of a man who defies convention, status quo and any semblance of reality.

God speed back to indies Rob, preferably while you are inking at the same time.