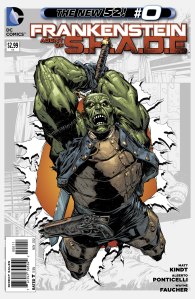 FRANKENSTEIN and his parent organization SHADE have been two of my favorite entities in the New 52. For the past twelve issues Lemire and Ponticelli have crafted a book where the plots are forged in the fiery pits of Mount Weird, and placed characters in the epicenter with souls that are a million times more beautiful than their hellish visages.  Most people think that Morrison’s SEVEN SOLDIERS Frank could never be emulated. To that I say poppycock, FRANKENSTEIN is just as imaginative and gut wrenching in-continuity.

Before we get into the prequel I know this book isn’t exactly setting sales records, so let me get you acclimated. This is especially important for those poor poor souls that never read SEVEN SOLDIERS. This isn’t the FRANKENSTEIN we all know from the thousand other sources we have loved or loathed over the years depending on your proclivity for horror. Personally, I hate horror movies, abhor them. So I was very leery to pick up FRANK even during SEVEN SOLDIERS, but I did; instead of being subjected to guttural utterances and aversions to fire though, I was treated to a purveyor of justice. FRANKENSTEIN in the DC universe is a creature born of death, but has the utmost respect for life and all of the things that encompass the experience – beauty, art and all intangibles of the human soul.

SHADE, the organization that employs FRANK, MRS. FRANK and a host of other weirdly HELLBOYish type characters is a character in and of itself. If you think STORMWATCH is the only invisible overlord in the DC universe think again. Father Time, the immortal body switcher that runs SHADE, had Ray Palmer shrink SHADE HQ down to a micron that contains a cosmos of weirdness as it travels the world watching the WATCHMEN and other nefarious deeds across all dimensions and time. Golem (not Gollum) like characters are the Oompa Loompas of SHADE, and that’s just one of the surprises that reveal each issue about this clandestine overseer.

OK, enough about what was. How does this 0 entry measure up? In short, perfect.

It’s a perfect jumping on point for new readers as we go directly back to the exact day of Frank’s creation.

Kindt serves as a perfect replacement for Lemire; keeping the humor, heart and horror that has made this such an amazing series to date.

Ponticelli continues the gritty goodness he’s delivered since issue 1. He also seems to revel in an extra level of glee this issue crafting Dr. Frankenstein’s lab complete with half dissected animal and human cadavers and a life engine that feeds on souls. I’ve heard people say his art is ugly. I say your face is ugly, yet the world still tolerates you. It’s called juxtaposition morons, look it up.

Pacing was spectacular, spending the right amount of time in the house of Frankenstein and then continuing the hunt of Father chasing son across time until Frank ultimately stumbles into his adoptive Father who is usually a Mother, Father Time.

Seriously, this is one of the true gems in the DC Universe. FRANKENSTEIN is wholly different from any other title, but packed with enough Easter Eggs and cleverly placed continuity drops to make it feel one with the complete DC tapestry. Please buy this book, the numbers indicate this book is headed for the dead zone and that would be an Optimous Shame. My only consolation is that if the book does get wheeled down to the morgue, at least Liefeld won’t be doing the pushing during its gasping last breaths.