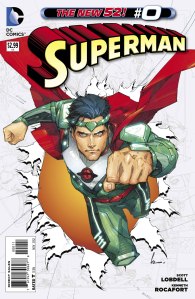 My favorite part of this issue was when Starfire came out of the water, dropped to all fours, and became an alien finger-cuff for Clark and Jimmy…Oh, wait, wrong book. Hopefully though, I pissed off at least three Mommy bloggers by invoking the sacred Starfire name.

H8Rs are going to hate, I could claim that this rendition of SUPERMAN was handed down to us by the ghost hands of Siegel, Shuster and Donner. That it completely retells the man of steel’s origin in a way never conceived and there would STILL be a collective yawn from the cynical comic cavalcade out there. So you know what, I’m not even going to try.

Some stories are simply timeless…like SUPERMAN, BATMAN, JESUS and JEFFREY DAHMER. And no matter how many times I read them, I always appreciate a fresh voice delivering the expected outcome. So it was with great gusto I ripped into this issue of SUPERMAN with a familiar, but wholly new, Kryptonian costumed figure bursting out of the cover.

I’ll also admit this creative team lives outside 50 Shades of Gray in the comic community. People either love or hate these guys, no middle ground. Personally, I love them. RED HOOD AND THE OUTLAWS is one of my top five in the new DCU, and I couldn’t wait to read their unique take on a title that let’s be honest, has been anything but stellar since relaunch.

Did they deliver? Absolutely! LobRocster take us to the days before the destruction of Krypton. But gone are the cool scientific minds of yore, where everyone on the Big K had a rod up their ass and spoke like they taught Elizabethan poetry. Yes, Krypton is more scientifically advanced, but at the same time they retain a level of…dare I say humanity that has been absent in almost every past iteration of the planet that was.

Jor-El is a wunderkind scientist, but has a rebellious streak that feels truly edgy. Like Cartman “he does what he wants” all with a wink, nod and middle finger aimed at the authoriti of Krypton. In past iterations the Kryptonian science council treated Jor’s sky is falling (or to be more accurate the planet is exploding) findings as the ravings of a mad-man. In the world of zero the council no longer dismisses Jor-El’s words, but rather does everything in their power to get him to shut the fuck up. It’s a cloak and dagger reflection of real world politics and authority figures that all comics should strive for, regardless of canon from 100 years ago.

This hunt leads me seamlessly to Lara-El, Supes mom. BEST RENDITION EVER. She was always so January Jones in past iterations, basically window dressing with tits. In place simply because the writer HAD to have a vagina to get the story going. No more, Lobdell gives her a sense of purpose, a kick ass Ying to Jor’s scientific Yang. She’s also a scientist, but learned her craft at the Kryptonian Military Academy. To see Jor and Lar work in concert with her as the muscle and his Ozymandius like foresight of enemy movements was a role reversal I find in many more couples these days – The Optimous house included.

As much as I loved the post ‘WORLD OF” titles that followed CRISIS ON INFINITE EARTHS, Lobdell has given these two more personalities in one issue than the entire WORLD OF KRYPTON series. The beautiful dichotomy he presents as the two fight the science council and prepare for Armageddon has given a layer to SUPERMAN’S biological parents never seen.

I was honestly pissed this issue ended so quickly, I only hope and pray that issue 13 builds off this zero instead of zipping us back to the current continuity mess Kal has been suffering for the last 12 issues.

Regardless of my wishes or where the title goes tomorrow, and regardless of your personal feelings on LobRocster as a creative team, they WILL bring something different to the tale and for that all comic fans should be grateful.