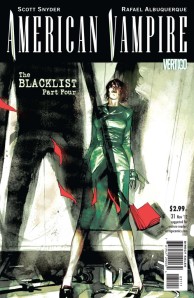 Hollywood rapes entertainment and hipsters are voyeurs to the crime. Case in point – vampires. All across the intertubes poser geekdom bemoans the lack of originality and the complete bastardization of Transylvania’s favorite bloodsuckers. Everywhere you look these faux intellectuals resound a chorus of “Twilight blows this and True Blood blumpkins that,” as if vampire entertainment begins and ends solely in moving pictures. And I guess for these lazy complainers it clearly does. They blame Hollywood for doing it’s job of appealing to the 98% who gleefully lick the jukebox begging to be taken advantage of, instead of simply logging their hipster asses off the internet for five minutes and looking towards some other medium of satisfying entertainment. You know, a form where originality still burns bright, where the story is a marriage of you, the author, and artist making the comic come alive by their design and your unique interpretation. Comics…I’m talking about comics.

I’m not saying the sheep of hate are wrong, there are flaws aplenty with the aforementioned properties of True and Twi (aside from being direct copies of one another in theme), but if the Internet complainers would actually crack open a comic for two seconds they would see that all of their complaints truly roll up into one overarching issue. For vampirism to truly matter there must be suffering and I mean beyond the bemoaning of teenagers looking to get their Bellgina Edcocked. Both vampire and victim must feel one another’s losses and laments and then sadistically feed upon those vulnerabilities – and I’m sorry, but the ending of a true vampire story should never be Asian massage.

This is why comic fans live in such solitude, we understand good entertainment doesn’t always end happily, actually the darker a piece gets the happier we seem to become. Oh we’ll revel in joy for a time, but then fully expect a piece to end with an atomic wedgey of the heart. This is the antithesis of formulaic Hollywood pabulum and why most comic properties end up losing a piece of their soul when moved to celluloid. 98% need their Price Charming, the 1% of pseudo intellectuals need to feed on the 98%, and us final 1% of comic fans are merely left to watch the animals consume themselves from our island of ideation and originality.

When Scott Snyder started AMERICAN VAMPIRE a few years ago I knew there was something special in the pages…well, at least half the pages. For all of Stephen King’s virtues, of which there are many, he is simply not a comic writer. Comics are not an exercise of littering a page with words; it’s a dance between writer and artist, both consuming the page in equal parts. King handled the exposition of America’s first vampire, Skinner Sweet well enough, but it was then unknown Snyder’s exploration of 1920’s aspiring starlet Pearl, which had me truly enthralled. I’m on record, Google it. It was eminently clear even then Snyder was in this story for the long haul. The seeds he was planting in those first few issues would clearly take time to flourish. I don’t think anyone guessed at the time he would rewrite the 20th century as he unfolded Skinner and Pearl’s stories, but that icing on the cake of complex characterization makes me wish he would slow the fuck down as the present story arc puts us well into the McCarthy era. Since it took three years for us to get from the Old West to the 1950s, I fear we’ll be at 2012 in no time. What then? Space Skinner? A Pearlonaut. Most definitely not.

AMERICAN VAMPIRE 31 is a pivotal issue for a few reasons: one we are fresh off Pearl and Skinner banging out their blood lust while Pearl’s decrepit husband was in a coma nappy. Two, we learn why Skinner really made Pearl. Basically it was to shift the old vampires’ jealously of Skinner’s ability to still get a tan on to Pearl so he could leave LA in peace and start-up Sin City. Three, Hattie Hargrove, the anti-Pearl returns on the last page as the grand puppet master of all 1950’s vampire troubles. I’m laughing right now because with her slashed psycho Marinette cheeks and freckles she looks like a demented puppet. I’m easily amused.

Disgust, betrayal, angst, longing – the emotions run as deep through AMERICAN VAMPIRE’S characters as Snyder’s exploration of American history. And VOLUME 4 of AMERICAN VAMPIRE is the perfect hard covered embodiment of this statement. Till this point Snyder has stayed pretty linear: He and Stephen King danced between the late 1800’s and early 1920’s in Volume 1, shifted to depression era for the tale of the Hoover Dam and Skinner turning the lights on in Sin City for Volume 2, splayed out both campaigns of WWII in Volume 3…but…but…but…now uses VOLUME 4 to play time travel roulette giving us a prequel of Skinner’s time in F-Troop fighting the injuns, a trip to a very bloody Happy Days, and a little racism song and dance south of the Mason-Dixon line. The thing that makes these stories truly sing is that Snyder truly captures the Zeitgeist of the time. The Indian extermination arc tests the merit of a man’s soul as Skinner and his Brother, like Cain and Able, decide whether winning this war requires the final solution. You can guess Skinner’s answer to this quandary. Our Happy Days arc explores the short-sightedness of youth as one “Rebel without a Cause” teen tries to exact vengeance against Skinner for slaughtering his family. Youth knows no consequences, which is the perfect armament is a war against a seemingly unstoppable foe. The final story focuses on a black taxonomist for the VMS in the Deep South when moonshine flowed freely and segregation was a law, not just a way of life.

Albuquerque’s art adds the perfect atmosphere for this book, his scratchy lines and ability to shroud a page in darkness without ever getting muddy or too obscure. I’ll admit, he took a while to grow on me, but now I couldn’t imagine anyone else in the driver’s seat.

Titles like AMERICAN VAMPIRE and NEW DEADWARDIANS prove that the vampire genre has not been bled dry. Despite the surface virtues of immortality and God like powers, Vampirism only works if writers remember that it’s a curse, not a blessing. While writers like Snyder give some of the vampire species an out from their traditional downfalls like sunlight and allows them to still feel human emotions, he intuitively counter-balances the blessings with great burdens of immortality and the insatiable thirst to feed on the sentient.