Outside of giving women free reign to dress whorey, I hate Halloween. I abhor being scared and freeloaders – which really only leaves drinking pumpkin ale, but I can do that without a costume. However, based on the billions of dollars this day brings in, and the national fervor that stops me from being able to call a meeting at work past 1:30, I know how alone I am in my feelings.

Comic homages to this day riddle the shelves and in most cases 99% of them make me moan like a ghost that gets thrown in the dryer. This has nothing to do with my specific feelings on Halloween, my vitriol spews forth because it gives great creators a free pass to dial in pun filled, wafer thin, one-shots that have no consequence and usually end with some ultra cheesy breaking of the 4th wall. But my job is to review comics, and just because the theme of October makes me quake with anger being a douche does not make me irresponsible.

While the rest of the comic world conjures the same old tropes, COMBAT JACKS takes one of the most unique and dare I say downright gorgeous homages to all hallows eve I have ever come across.

Part Sci-Fi, part horror, and again insanely gorgeous, COMBAT JACKS is a welcome respite for those that could care less about things that go bump in the night. Now, when I say part Sci-fi that’s a bit of a misnomer, I think my high tolerance for COMBAT JACKS is the fact it’s 99% Sci-fi and 1% steeped in the theme of the month.

Two hundred years in the future we have trashed the shit out of Mother Gaia. Fortunately as earth gasps its last breath, Big Daddy Sol was able to capture in its gravitational pull a new planet, Maia. Maia isn’t only ready for life; it came ripe and ready with a breathable atmosphere and soil ready for cultivation. 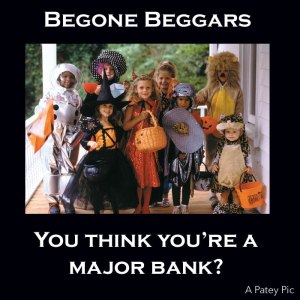 In pure science fiction form, McKenna makes insanely more sense than any current politician. Instead of giving prisoners cable TV and bleeding the national tax dollars, McKenna puts these miscreants to work on Maia rebuilding a habitable landscape for humans. Everything seems to be going fine and dandy, until the workers stop shooting communique signals to Earth.

Enter the space marines, a rag-tag group of guys and gals sent to ascertain exactly what the fuck is going down on Maia.

To say more would ruin the rest of this book, the surprise ending and yes the very clever tie-in to the Holiday I hate so much. I will say though, the tie-in is anything but cheesy and I applaud Baroody once again for bringing some real life comic players to life within the ending pages of COMBAT JACKS.

McKenna is a long standing force in comics; his inking skills are bar none as exhibited by his pantheon of work at DC over the past two decades. The Banana Tale brand started as his homage to a story he once told his children, I’m glad to see it expand beyond kiddie fair and can’t wait for the next book that speaks to a theme I actually enjoy. Because even though I hate Halloween, I really enjoyed COMBAT JACKS.