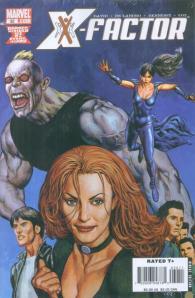 What amazes me most about this review, I was actually once doubtful of Jamie Madrox running this team.

Let me just start by saying that this is the best damn X-book on the shelves. I will gladly fight a hulking mass of Whedonite or a razor-backed Brubakerin to defend this title’s superiority over ASTONISHING or the regular X-titles. Always on time and never too mired in editorial mandates for crossovers and upsells, this second stringer in X-continuity has consistently delivered sharp writing, complex characters and a new take on the hackneyed old mutant team dynamic by never getting lost in convention.

Some will call this latest series to don the X-FACTOR title a detective book; others might say it’s a representation (and perhaps a reflection) of a society in decay; and finally aging fanboys see it as a chance to revisit characters they fell in love with sixteen years ago. It’s the rare title that can cater to so many audiences without pandering to any one demographic group.

For anyone that has shunned this book and can’t afford trades in this trying economy, this latest issue is the perfect time to jump aboard as the team from Mutant Town gets a fresh start by ripping off the crusted purple scabs of old wounds.

I was terrified when this book was launched. I saw positioning Jaime “Multiple Man” Madrox as the story’s central character equivalent to building a million dollar movie franchise on the waifish shoulders of Corey Feldman. This was a fair impression considering the last time David helmed X-FACTOR back in the early 90s Jamie Madrox and Guido “Strong Guy” Carosella served as The Two Coreys of the team, never taking anything seriously and serving merely to interject quips during dire circumstances. While I loved these characters as a kid, even way back then I could only handle them in small doses, anxiously waiting for the panels when Forge or their government handler Val Cooper would squash the “funny” and interject some drama, tension and rising action.

Then David surprised the hell out of me. This new version of X-FACTOR was a complete 180 degree turn from the book I remembered, because somewhere, somewhen, Jaime Madrox grew up. Gone was the man-child that would pound his armpit to create doppelgangers to help him bang chicks and perform mundane life activities like taint hygiene. No, this version of Jaime Madrox is a man in search of his soul, wrought with all of the introspective baggage of a college freshman who just took their first intro to psych class, and now creating copies of him self to learn about the intricacies of life in the shortest time possible through osmosis.

As I stated earlier, X-FACTOR at its core was established as a detective book. After the mystical genocide of M-Day, Madrox and some of our old favorites like Strong Guy, Syren, Monet St. Croix and Rhane Sinclaire, set up camp in the ghetto that was Mutant Town to help keep the peace and in the process play Blues Clues for violent acts against current and ex-muties. While the cases have been entertaining, it’s truly been the character dynamics that have driven this piece. The insertion of the mystical and all knowing Layla Miller has been one of the new character additions that I found grating at first, but she has truly grown into her own as the issues progressed. What lies in store for her future and her relationship to Jamie Madrox is just one of the reasons this book is a “first read” when I get home from my LCS.

Issue #32 serves as a complete decimation of the old and offers a nostalgic new springboard for the series going forward. After the destruction of Auschwitz, I mean Mutant Town, at the hands of Arcade, Val Cooper descends from the cockpit of her metal mutant protecting machines to offer X-Factor an ultimatum and a job. Just when I had thought that the merry mutants would bite at this new offer taking us back to the government controlled X-Factor of yore, Madrox springs a coup d’état leaving egg on the face of our government and in the process completely closes the first chapter of this team that is now on the run.

I should also mention that De Landro’s chalky pencils add an additional noir vibe to the book without ever being too realistic or too esoteric. This book is about living underground and De Landro perfectly accompanies that theme without making the book too damn dark too see, which sadly seems to be the norm these days. Note to artists everywhere: the use of shadow does not absolve you from providing detail in each scene.

I pity the fool that is handed X-FACTOR if or when Peter David steps down. These are his characters and this is his substratum within the grand scheme of X-books. If this book were to survive within the hands of another writer, they would need to bring to the table biting wit and complex character introspection all within the context of a meaty story. None of these are easy feats and thank god for the time being we have Peter David, who can accomplish all of this with seemingly little effort.

When Optimous Douche isn’t reading comics and misspelling the names of 80’s icons, he “transforms” into a corporate communications guru. Optimous is looking for artistry help, critical feedback and a little industry insight to get his original book AVERAGE JOE up, up and on the shelves. What if the entire world had super powers? Find out in the blog section of Optimous’ MySpace page to see some preview pages and leave comments.