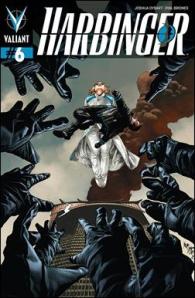 I consider it my personal mission to herald the virtues of great comics to the masses. While I like to spread this love across the entire industry, lately I can’t keep my eyes off Valiant. Their realistic, no bull-shit approach to the fantastical is almost impossible to emulate while wearing spandex and capes. Hey, I understand gritty realism isn’t for everybody; and even I with all my dark cynicism need my escapist dose of poses and dialog bubbles that are decrees instead of conversations, but Valiant cracks a nut that no “Reboot” or “ReNow” will ever be available to achieve simply by virtue of who they are.

I was all set to extol the virtues of X-O MANOWAR this week, and while this ancient Norseman in futuristic battle armor is a great read, X-O is mid-story right now. HARBINGER, the Valiant answer to the X-MEN starts a new arc this issue and with it Dysart reveals yet another layer to a book that was already several stratums deep. Basically, if you’re a fan of old Valiant you’re a fucking idiot for not imbibing Valiant 2.0. If you are too young to remember old Valiant or still don’t know a Shadowman from Dayman, I hope the following will entreat you to learn more.

HARBINGER is the new term for the age old problem of muties, mutates, freaks, basically the next generation of humanity that can control the world instead of being hapless victims to circumstance like all of us poor old Homo Sapiens. What’s different with HARBINGER is that it takes a pragmatic approach to this problem as the real world dictates, avoiding the exercise of making the real world transform to fit the narrative.

The bad guy in HARBINGER, Toyo Harada, was the first of this next gen. An early baby-boomer caught near grand zero when America ended WWII in a flash of light. He is also one of the most powerful of this next generation; he can manipulate minds on a global scale, transform reality, and activate anyone who is latently carrying the HARBINGER gene. All of these issues have been explored before in comics, but never with this stark level of realism. Instead of donning a cape and hat, getting five mutants together, and then destroying some high-profile target, Harada realized that power simply was not enough. In this complex age, he who has the money writes the rules. One can use far less power to control much more if they have a solid infrastructure in place before begin their power play. To that end Harada spends the better part of the 20th century using his power to build a global conglomerate before moving into his end-game of check mate.

The flip-side of Harada is Pete Stancheck, a young man on the same power scale as Harada with a millionth of the ambition. In fact, Stancheck is more afraid of his abilities than ready to embrace them. Rightly so, as a member of the “better parenting through pills” generation, Pete grew up believing that it wasn’t the blessing of power he carried, but rather the curse of insanity. Once Harada took notice of Peter in the early issues of HARBINGER, we begin to see the man Peter might become, but the journey will be long. As a member of Harada’s HARBINGER Foundation, Pete quickly realizes Harada’s power play and makes a hasty exit for freedom. Peter was greatly helped in this decision when he uncovered last issue that his insane friend, Joe, who Harada swore to protect, was merely a pawn in keeping Pete under control.

That’s things in a nutshell; all good stuff…but what makes it truly great? This is where we get into the infinite layers that clearly show Dysart has a clear plan instead of just throwing random superhero tropes onto the page.

Harada is more than a man of power; he is the embodiment of the at death’s doorstep Baby-Boomer generation.  A generation that was able to ride the spoils their parents fought so hard for and lived a life of relative ease as a result. Alan Greenspan said thirty years ago that the next generation will not do as well as the Baby-Boomers. We all laughed at the time, but as the current state of the economy shows, where raises are a gift instead of an expectation, the legacy of the boomers could very well be a bust. Yes, this is part of the “stuff” of HARBINGER (not the Greenspan thing, that’s my value-add), Harada can slow the decay of time, but not stop it. And he is damned and determined to leave his final mark on the world.

A generation ago, when Gen X was far from middle-age, the kids who we are learning will be the renegade HARBINGERS (off Harada’s reservation), came together in a very different way by virtue of the time period. Twenty years ago life was much simpler, a tradesman could practice their craft and thrive, there was a freedom and prosperity when my generation was leaving High School and College that simply isn’t real anymore. Back then the HARBINGERS came together through happenstance as they all were searching for the adults they would one day become. The powers basically were secondary…at first In today’s world of heavy processes, and need for predictive ROI, very few young people hit the road searching for themselves.

We can also attribute this lack of generational courage to helicopter parenting that does nothing to prepare kids for tomorrow and keeps them in Mom and Dad’s basement until their first prostate exam. Fellow renegade HARBINGER, the fabulously floating Zephyr is a prime example of this new molly coddling. She’s fat, she knows she’s fat, yet she embodies her Christian name of Faith at every turn. Twenty years ago, Faith was a big fat mess mentally, even though she tried to keep a firm upper lip. Now, she’s part of the home schooled generation that as soon as the going got tough the less than tough turned to Mom to become their HS principal. Now Dysart doesn’t specifically state Faith is home schooled, but by her Golden Retriever levels of trust in humanity, it’s clear she was sheltered versus Mooed at in the hallways of public High School. Don’t get me wrong I love Zephyr, a character that simply floats instead of flies are the deconstructions comic fans live for.

Finally rounding out the new renegade HARBINGERS is Kris, the young lady who Pete has imprinted on as his life mate. With Kris you see the starkest differences between Valiant 1.0 & 2.0.  A generation ago these two were truly in love and Kris came with Pete willingly on his adventure of overthrowing Harada. In the 2.0 world, Kris and Pete only dated a few times, he thought more of it then she did, and in the first few issues he mind rapes her into loving him. Powerful stuff. Even more powerful was when he let her go, when he though the HARBINGER foundation was serving the greater good. Even powerfuller is the full circle this issue takes to bring Kris back into Pete’s arms and her altruism in taking on the babysitting of a living God.

I could continue to ferret out the details of HARBINGER; discussing in depth how each conversation has emotional resonance, how Briones’ art perfectly captures the moody scenes as well as the action with equal aplomb, but… wouldn’t you rather just read the book? Please say yes, my fingers are tired and I really want to get back to reading more Valiant books.