THE ADVENTURES OF THE 19XX: THE RISE OF THE BLACK FAUN

The 19XX is the most imaginative, accurate and beautiful book you’ve never ever heard of. While I have a deep an undying love of the oxymoron called historical fiction, all comic fans who appreciate a well-crafted and meaty (140+ pages) tale of the Great Generation during their heyday will find something to love in 19XX. 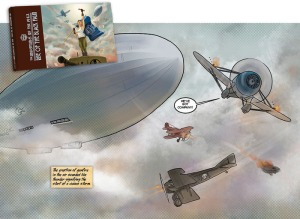 This is the opposite side of the LEAGUE OF EXTRAORDINARY GENTLEMEN coin. Where Moore took known literary figures and placed them in fantastical situations, 19XX crafts characters that are new and places them right inside the actual events (with comic flourish of course) leading up to WWII. It also skips the copious amounts of fucking and deconstruction that are Moore staples for entertainment, making 19XX family entertainment at its finest.

I think Martinez actually had a much tougher job than Moore. He didn’t rely on the crutch of having other writers create his characters’ back stories. Each member of the 19XX is original, yet instantly familiar if you’ve ever seen a Saturday serial that our Grandparents relied on for depression era entertainment. The 19XX is essentially the Men in Black minus the aliens. They are a secret organization of fantastic individuals that handle problems the world is just not ready to believe. Aboard a Zeppelin style airship, the 19XX traverses the world quelling the unrest caused by werewolves, voodoo queens and a new entity called, The Black Faun, a clandestine organization looking to help Germany create an Uber World power.

Told through the narrative of the 19XX’s newest recruit, the kid, we get our introductions to the 19XX through his eyes of discovery. As he first traverses the 19XX’s airship base, The Carpathian, we get brief but appropriate introductions to the team: first the Captain, a man visually akin to the captain of the Titanic, but far more skilled. Penn Clement, the man of 1,000 gadgets and resident jokester. Fay Wells, an Amelia Earhart type flying ace (again with better skills), who plays a game of flirtatious cat & mouse with Penn. Diablo the XO, a man who is always ready for adventure with a square jaw and strong fist. Zora Hounan, botanist and mystic and last but not least, Marjorie, the Captain’s daughter. Now, these are the main members of the 19XX, but as the story unfolds they get help from such famous figures as Harry Houdini, who makes a posthumous appearance in the 1930’s thanks to a device lent to the 19XX by Nikolas Tesla. William Moffett, an early proponent of airship potential, and Black Herman, the first African-American celebrity of magic.

Now, of course no tale would be complete without villains and once again Martinez borrows from the old, but also innovates in the process. As precursors to the Nazis, the Black Faun have their own mixed bag of the fantastical on their side. A voodoo woman made of mist. A mechanical/human pre-Nazi, technomancy drones crafted from the fusion of magic and science. And a Baron that is strangely akin to Ra’s Al Ghul’s recipe for immortality.

In a race against time, the 19XX and the Black Faun traverse America to be the first to snatch artifacts that could unleash the end of mankind. The Black Faun thinks the artifacts will unleash the Aryan race. The 19XX have no idea what the artifacts will unleash, but they have it on good authority from soothsayers it will harken the next great war. It’s during these travels where Martinez not only exhibits his talent, but also his meticulous style of comic craftsmanship. Not only is EVERY panel laden with a background, but everything (hear me EVERYTHING) is historically accurate. Architecture, machinery design, and even fashion are spot on with the time period of the early 30’s.

Most of my followers know I try to avoid Kickstarters, but 19XX is different for a few reasons. One, the book exists already and sold out almost instantly. Plus it was nominated for some impressive awards when first released. If you have a Kickstarter and haven’t even created a book yet, don’t ask me to promote it. Two, Martinez upgraded the book from the last printing and created a voluminous compendium to complement it. Three, Martinez is dedicated to turning this into a series of six books. I don’t know how he’ll find the time with the insane amount of detail and sheer volume of the books, but book II is almost ready to go and established as a reward if you contribute enough. Four, it’s fucking awesome, and I would be doing the comic medium a grave disservice if I kept its goodness to myself.

Now, I only got to read a PDF of the book, but I would LOVE to see the hardcover bound edition in beautiful wide screen layout. Plus, there’s just something about cloth covers that feel…special. If you contribute a paltry $35, you can make my wish your reality. It’s a small sum to pay for a 140 page book of this quality, and you get a whole slew of extras 19XX paraphernalia to kickstart your fandom for one of comics’ best new talents.

2 thoughts on “THE ADVENTURES OF THE 19XX: THE RISE OF THE BLACK FAUN REVIEW”