“You know what Jason Todd? I helped kill you 25 years ago. I was one of the legions who dialed 1-900-KILL-TOD and felt my parents’ wrath when the bill came so my voice could be heard. I felt a modicum of guilt for the decision and then felt the weight of that guilt subside with your return. All of my remorse went away when you found a good comic book and true direction in RED HOOD. However, after BATMAN INCORPORATED 6, I take it all back. I’m glad you died and I’m pissed you got to bang Starfire, because anyone who messes with BAT-COW will feel the wrath of Damian Wayne and Optimous Douche.”

I chided Vol 1. Of BATMAN INCORPORATED. While I dug the idea of a bunch of Batman’s running around and once I got past the Knight & Squire issues I felt the execution was top notch, I just could not get past Bruce Wayne’s public declaration of financing BATMAN. I felt it was akin to giving Clark Kent contacts and still expecting us to buy his ruse. Essentially it opened the kimono WAY TOO far for comfort (and stretched  the believability that comic denizens are really that obtuse). 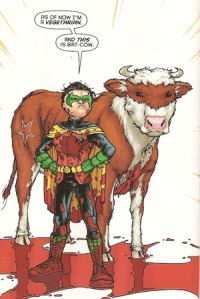 Vol 2 though has completely shifted gears. Instead of Bruce travelling the world recruiting, all of his BATMAN’S have come back to the aerie in Gotham to battle Leviathan and their seductive mistress, Talia Al Ghul. Without the public declarations, trite cultural tropes, and Batman especially acting like an Amway salesman to get people on board, BATMAN INCORPORATED took on a persona I could get behind with the fullest of support.

The series also introduced BAT-COW, probably my favorite character of the NEW 52. I have no bovine fetish, what I adore is what BAT-COW symbolizes in my favorite Robin to date, Damian Wayne. Raised by assassins, spoiled beyond belief, and smarter than the average bear, Damian the little prick is easy to portray. And before you give me a petulant “ttt,” think about it. I’m right. For issue upon issue people wanted to beat this kid as he sassed off to Dick Grayson while Batman was on his sojourn through time. Since the return though, Robin the scared and is this issue reveals truly unwanted little boy has never been explored. Morrison rectified this with BAT-COW. In the adoption of this doe eyed creature we see the sad and all too often plight of only children befriending and anthropomorphizing animals for friendship. And it doesn’t hurt that the adoption took place in perfect juxtaposition with his killer side in BATMAN INCORPORATED 1.

Another reason I’m fully enamored with this volume, and this particular issue, is that Talia gets the best of all the worldly Bats and it’s up to the OB (original bats) to save their foreign asses. Squire, my least favorite of the international crew is hanging on the precipice of death at the end. I give a big Bally Ho to any writer that’s willing to off cockney stereotypes; with Morrison leaving DC I would pay him personally to rewrite My Fair Lady with Eliza turning to prostitution and heavy drug use at the end.

It wasn’t all shits and giggles for me this issue though. First there’s Jerk-Off Jason who takes a direct stab at BAT-COW in the Bat-Cave as the four Robin’s monitor Batman’s progress towards Talia in her abandoned warehouse maze of doom. Then there was a further blow to the fragile Robin ego. Hands down, Burnham draws my favorite version of Damian, making him look like a true little boy with a chip on his shoulder. What we hadn’t seen before in Robin though, was pain. In the past any emotional scars were firmly scabbed over with attitude. With Morrison’s words and Bunham’s art, my heart broke a little when she said the only reason for Damian was to have spare parts for Ra’s. It’s an epic blow to the little scamp that Talia then pours lemon juice on in the form of an epic cliff-hanger of danger to Damian or all of Gotham. I’m not going to say what it is, but the Judgment Scales on the cover will give you a clue and it’s a perfect swan song before Morrison he says sayonara to DC for a while.

I’ll buy anything with BAT-COW and receive a modicum of enjoyment from it, but in the hands of Master Morrison every BAT-MOMENT is Kobe instead of ground chuck including BATMAN INCORPORATED 6.

Oh, and fuck you once again Jason.