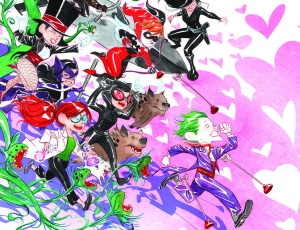 Tired of face lift…offs and the morbidity of comics, want to just have a little bit o’ fun with some of your favorite Gothamites? Look no further than L’il GOTHAM. Before you think this digital exclusive is just the Muppet Babying of the bat family, listen to what L’il GOTHAM artist extraordinaire, Dustin Nguyen, has to say about Holiday time inside his imagination.

Rob Patey – Optimous Douche (OD): I’ll admit, as a fully grown man the L’il GOTHAM line scared me from both peer perception and enjoyment. So I need to ask, how two other grown men would think to slather Gotham with Muppet Baby style cuteness?

Dustin Nguyen (DN): At first, it was done for fun- to take a break from the seriousness of drawing the day to day books I was working on. Then it just got addicting to see what every character might look like and act if they weren’t always so serious. 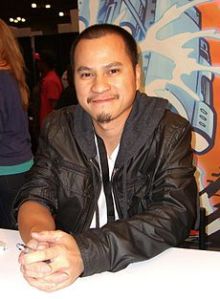 OD: Where did the Holiday theme for each issue come from? Was it part of the initial pitch or a DC add? And what antics can we expect for Passover this year?

DN: The Holiday theme in the initial pitch we titled “ Little Gotham’s: Calender of Small Events.” It came from the idea that if we can get DC to sign off on a year-long Holiday based series… we’d get at least a year’s worth of work. Passover’s going to all bundled up with this year’s end of season special, I believe that one’s going to be a two-parter.

OD: Will future chapters be holiday themed as well, or can we expect a break from Holiday time?

DN: Yeah definitely, since we get to do 2 chapters instead of 1 a month now, we are expanding to a few 2-parters for some stories, and as you mentioned- break away from the holiday theme and might even leave Gotham City for a bit.

OD: Both you and your writing counterpart  Derek Fridolfs work in the other stratums of the DC brand spectrum of ages. What’s it like shifting gears from one to the other, and do you ever find ideas from one feeding the others?

DN: I definitely feel the two have to co-exist, although to be honest, I am a little behind on the current timeline. Derek and I still sort of live in the BTAS world sometimes.

OD: The New 52 continuity in Gotham is pretty dark, are you guys making any of those themes a little more palatable like the Joker’s face hanging off his skull? Or do you just avoid main continuity all together?

OD: So have you guys hit every player in Gotham yet? Anyone waiting in the wings or someone you’re dying to “youth”enize?

DN: We’re pretty much open to anyone really, i prefer some of the more obscure, lesser used characters, but we always want to include some that’s more known as to not completely alienate the main audience. ah- but they all stay their own age even through my stylized versions! 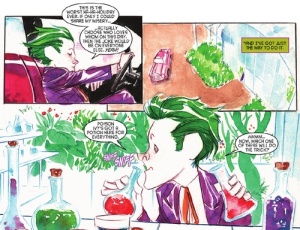 OD: Friendship is a big part of L’IL GOTHAM as are larger panels with far easier flow. I have to assume this is because a child’s head and thus brain is so small and also have a false sense that mankind is good? Do you find any extra freedoms in these wide open panel spaces and moralistic black and white surety?

DN: That’s absolutely what it is, so we’re letting the kids enjoy it while it lasts, but around that, there’s still plenty or room to play with. Now that we’ve gotten the green-light to do more chapters, we can focus on stories that are more involved and would take a bit longer to tell.

OD: What about Bat-Cow? I loooovvveee Bat-Cow!
DN: So does our editor Sarah! i believe you’ll see a guest appearance by the cow sooner than later.

OD: Can you please give us the lowdown on the impending Valentine’s issue if you would be so kind?

OD: Oh come on now, you can do better than that. Who are the primary players? Perhaps a little Poison Ivy love potion?

DN: Gah! you NAILED it. Joker and the LAYDEEES in this one.

L’il GOTHAM’s Valentine special  is ready for download now. Get up on it, especially for the wee comic fans in your life.