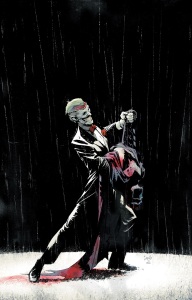 The frenzied pace that has been Death of the Family doesn’t stop for the opening pages of its final chapter. The eyes are wide open, the narcotics and concussions have worn off, and at last the platters are ready to be revealed. What follows will be one of most divisive moments in comics this year.

The “reveal” that we’ve all been waiting for, the thing that was theorized so much it approached Godwin’s law seconds after the series was announced (and no the Joker is not Hitler, just in case those folks thought they were right), is a delight of massive morbidity. It’s an atrocity exactly on par…I mean exactly….with the fate that befell the Joker at the start for the New 52.

Face…it’s what’s for dinner. Dick, Damian, Jason, Tim and Babs are all served a hearty helping of their own puddum puddin. It was a moment of horror, insight into the true face of evil, and a poignant, if batshit crazy poem to Batman’s one Achilles’ heel as Joker uses this to moment to show just how soft the family literally is beneath their respective masks.

And then we find it’s all just a fugazi, a falsehood meant to satisfy the sensationalists of the world who needed this to culminate in physical, not emotional entropy. The truth is The Reveal has been in front of our faces all along. I would say, “No pun intended,” but I’m honestly not sure there isn’t some kind of meta level joke in all this being played on us as well.

The true purpose of The Joker’s plans in Death of the Family was revealed two months ago when the clan found out the Joker had been in the cave and Bruce never told them. Death in the Family was all about deconstructing trust. It’s ultimate purpose was to separate all of the Bat titles so each character can find a light to grow outside of Bruce’s shadow. And more importantly add much needed continuity distance from the carryover Flash brought back with him from the Flashpoint universe.

So, no one’s dead, the atrocity is that of the sprit:  Babs’ limbs all function, Jason didn’t take another crowbar to the face, and Damian still faces more danger from his mother in BATMAN INC. than he does inside the Bat-Cave. I know there will be fans who will cry foul in the fact the worst thing to happen to any character is a waft of ultra potent Joker toxin. But, when I’m asked the inevitable question of whether I liked Death of the Family the answer will be, “Yes, but only if…

Only if Bruce truly has to fight his way back into the family’s hearts and souls (including Damian). Only if once Snyder sets his sights on Metropolis we see other writers truly embrace the foundation Snyder laid before them. Only if DC commits to taking a break from Bat cross-overs for a while to let each character develop independently. This last point is most important. Snyder did what he does best, he built mythos through history. Now its time to honor this path and tread it truly, press forward with more tales of detective work in the now and let history come organically moving forward.

Death of the Family is a tragic story of love unrequited. This is the Joker’s tragedy. Even though he knew who Bruce was all along, it was never about exposing Batman, it was about keeping him hidden so the game could on and on and on….

3 thoughts on “BATMAN 17 REVIEW: Death of The Family…We Were All Wrong”