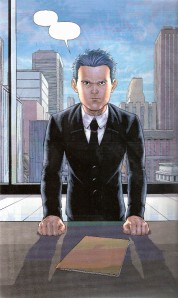 Damian Wayne, the 4th Robin, Apologizes for Forgetting to Die During “Death of the Family”

Gotham City, uhhh NY (we think) – On the steps of Wayne Industries’ headquarters in downtown Gotham today, Damian Wayne, the heir to Wayne Enterprises and sometime superhero (all the time brat), expressed his moderate sorrow for forgetting to die during the Joker’s recent slaughter spree some in the press dubbed Death of the Family.

“Tt,” Wayne said as he took the podium. He continued, “I’m not sure exactly why I’m lowering myself by justifying my existence to the troglodytes of Gotham City, but Father’s PR people said it would engender good will from the street. Tt.” At this point Wayne Industries’ director of PR, Harold Allnut, rushed the microphone and whispered in the petulant young man’s ear.

Wayne continued, “Apparently I was supposed to let Pennyworth or the street urchin, Jason Todd, shiv me in the Batcave as Father danced with the devil in the pale moonlight. However, Titus needed to go out for a walk and Bat-Cow required a thorough brushing.” “Honestly if we could get better help than a waifish octogenarian, I would feel far more comfortable shuffling loose this mortal coil.”

“My plan right now is to allow my Mother to be my undoing sometime tomorrow afternoon.” Wayne said with surprising little fear or remorse.

Surprisingly, Gotham’s favorite son and Father of Damian, Bruce Wayne, was not present as his son announced his impending doom. Reporter Vicki Vale however was “somehow” able to issue this statement by Wayne from an undisclosed location, “Look, his (Damian) Mother and I had an affair like twenty years ago. I can’t help it the Al Guhl family has a gestation period longer than a prehistoric elephant.” Wayne brazenly continued, “I’ve had fun with the kid, but I’ve had fun with every small boy I’ve brought in my house and if Gotham is lacking in hope, it ain’t lacking in small young boys for me to live with and put in mortal danger.”

Wayne shocked the world a few years ago after return from a sojourn to a methadone clinic in Arizona when he announced that he was Gotham’s famous caped crusader Batman. Even though the announcement was merely meant to announce Wayne’s funding of the Batman, since the audience wasn’t occupied solely by Helen Keller, most put two and two together. This led to a wide depression across Gotham city for our collective mass stupidity and blindness over the years.

The conference concluded with the same little fanfare that began the event, “That is all, thank you, I guess, for your time. Tt!”

With this death of Damian Wayne, Gotham is left to wonder whether the Wayne legacy can prevail given it’s clear that God has a bigger vendetta against their survival than the Kenendy clan.

2 thoughts on “ROBIN APOLOGIZES FOR FORGETTING TO DIE”