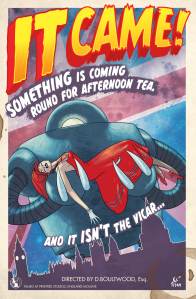 IT CAME…on my face! IT CAME…that’s what she said! IT CAME…and all I got was this lousy T-shirt!

I open this review with these Catskill favorites not to make myself laugh (OK, maybe a little), but more so to make the point you must be ready to read IT CAME with tongue surgically grafted to cheek.

Like most Gen Xers, I’m a big Mystery Science Theater 3000 fan. Black and white B-movies that normally wouldn’t receive one minute of my attention were watched in full thanks to the sarcastic second track served up by Tom, Crow, Mike and or Joel.  IT CAME delivers 1950’s B-movie hyperbole drama through the cynical lens that knows half of what the characters are saying is complete and utter bullshit. But, what’s important is the characters buy the bullshit, and as a reader you can’t help but abandon all of your own logic in the process (a little like Star Trek).

SCIENCE! Whenever an alien threat or creature from the black lagoon needed to be obliterated or sent back from whence they came, ubiquitous and ethereal science is always the weapon of choice. What kind of science? Stop asking such ridiculous and impertinent questions with your 1970’s future sensibilities. Back in the 1950’s scientists could dabble in and wield all 4 of the earth’s natural elements with such aplomb that no fantastical contraption was beyond their powers of conjuration or nemesis beyond thwarting.

Our wielder of Science in IT CAME is the obliviously misogynistic Dr. Brett Boy. As a graduate of the space institute, and noteworthy speaker of the space consortium, Brett is the ideal candidate to deal with say…a giant robot from space tearing up the English countryside. Thank goodness, because that’s the plot of IT CAME. That’s it. Again though, just like you wouldn’t watch a B-Movie these days for twists or surprises, you don’t read IT CAME for the big A-HA moment. You read it to see a time that once was and how laughable the sensibilities of our grandparent’s generation have become. Especially when crafted by Boultwood’s deft pencil.

What would misogyny be without an ingénue to be misogynistic with? Filling this role is Boy’s travel companion, the spinster, Doris Night. At twenty-eight years old and suffering from the infliction of being penisless, Boy explains the world and universe to Night before the monster attack begins. Why are they driving around the English countryside together? It was the 1950’s and that was simply the norm. Women who were entering their menopausal late twenties would do anything to get a man, including listening to a dissertation on the heliocentric nature of our solar system – because as boy explains, all suns revolve around ours.

The art is in lock step with the other homages and parodies of this title. From cover to cover (literally) everything fits together more perfectly than Leave it to Beaver and Ovaltine. Boultwood’s choice of blue hue colors instead of straight black and white is a perfect copy of the degradation expected after celluloid reaches the age of sixty. Accompanying the main panels are also two delightful ads for famous fifty products that most people won’t even look twice at these days, much less imbibe.

My only “critique” of IT CAME (and pay attention to the quotes here), is that it’s very British. No, I don’t mean it comes with bad teeth. Much of the humor was grasped by my Optimous mind because I had a lot of British friends growing up and I live on a steady diet of BBC programming (hell I love the British so much, my graphic novel is being published in the Motherland). I’m not saying you have to BE British to enjoy IT CAME, some of the jokes and words though might fly over your Americentric head.

This is another stellar piece for the new TITAN comics imprint, they are taking bold chances with stories while remembering the cardinal rule – comics should be fun. Sorry for the early tease, but this one doesn’t drop until August. Make sure to tell your retailer to order it in the April edition of Previews or risk feeling the wrath of science.