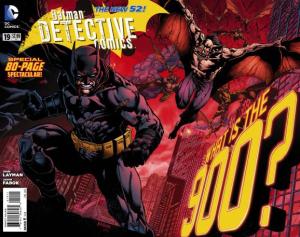 DETECTIVE continues to be the ugly step-child of the Bat-Family never receiving the same fanfare as its venerable Bat-Brethren and I’ll tell you it baffles me.

I know I’m part of the problem. I’ve only dipped into DETECTIVE when it’s considered a seminal issue like this 80 page spectacular or it stands as “required” reading for large Bat-crossovers. Required was in quotes because while I loved the issue with the “Death of the Family” die-cut cover, it was really a story about the Penguin with one panel of the Joker’s torso.

That seems to be DETECTIVE’S bag, a dark spotlight cast upon the villainy of Gotham. It’s refreshing, fun and fantastic to take a break from the melodrama that has become the bat-family and just imbibe some good old nefarious wrong-doing told from the perspective of the beasts that go bump in the night.

Five stories await you in this issue. I miss this kind of storytelling to the depths of my dark soul. For anyone who laments the move to trade pacing that seems to suffocate this industry, you too will enjoy the beginnings, middle and ends found inside. The best part is that Layman was able to make all 4 of his stories mesh together more seamlessly than Lindsey Lohan, vodka and a Bentley. All 4 stories view the same event from a slightly eschewed angle giving you a complete picture of a night when Gotham was terrorized rather than saved by Bats.

The 900 – I’ve never been a big Man-Bat fan, but Layman has changed all that with this book. For the first time he’s no longer a silly contrivance of fangs and wings, instead Layman humanized this character to the nth degree and made him an honest-to-God hero. I don’t know if this is Kirk Langstrom’s first appearance in the New 52, but it certainly could be as Layman handles the Man-bat serum exposition and ultimate outbreak masterfully in a very tiny page count.

Basically the 900 is a block in Gotham where the Langstrom’s serum to initially help the deaf outbreaks and infects the whole city. Batman does some sleuthing and there are some great moments where the Bat-Family tells him to eat guano when he reaches out for help. Across the board Layman integrates this to current happenings in other Bat-books for true fans, but never belabors things so much that you felt like you missed out if you haven’t read the other books. Here is where you find out why Talia had Man-Bats in BATMAN INC.

Birth of a Family takes off moments after Langstrom flies away into the night after identifying patient zero in the last adventure. We are then whisked backwards in time as his wife recounts their first meeting, how she fell in love with the man trying to give the deaf Bat-ears and the ultimate horrific side effects of Kirk’s good intentions. Not one content to let her betrothed suffer, this vignette closes with the possible birth of Woman-Bat.

War Council – This story of Bane training an army to invade Gotham was good, but didn’t make a lick of sense thematically with the rest of the book. If Bane has been a presence in DETECTIVE up until now then fine, I guess it works. If not, the inclusion of this story leaves me baffled other than to get people to read TALON. 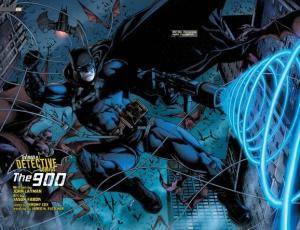 Mr. Combustible – OK back to the good stuff. When I dipped in during “Death of the Family” I was treated to a wonderful double-cross of the Penguin by one of his underlings, and thus bore witness to the rise of Emperor Penguin. Little Penguin was used by the joker and then incarcerated, and there he hath remained until now. Starting with the night the 900 block broke out, we see cheesy 60’s throwback Mr. Combustible, a villain who looks eerily like Mr. Peanut except his head was cobbled together by Thomas Edison. With cane, top hat and light bulb head, Mr. Combustible takes full advantage of the Man-Bat terror across Gotham to do a little five-finger discount shopping. Even though this moved briskly it never felt rushed. After giving his tithing to Emperor Penguin, Mr. C then goes to help his true master waddle out of the coop. DETECTIVE 20 should bring forward a Penguin slap fight more brutal than being forced to watch a Happy Feet marathon.

Through a Blue Lens – I’m a big fan of stories that present heroes through the everyman’s eyes. Blue gives us the story of a GCPD cop who was transformed into a Man-Bat and then saved by Langstrom’s “Colossus” great sacrifice (not a typo, you’ll get it when you read it). This is basically a morality tale on the value of vigilantes, but I’ll take old debates when they are this well humanized. The brothers and sister in arms gather around to regale the night of Bats, Batman’s breaking of the cop’s wing…I mean arm now,  and to share a few snuck past the nurses beer and laughs. Layman does a great job not injecting his own morality into his writing, the side that seems right will be judged solely by you.

The art is this thing sings across the board, with each using the light and dark perfectly with the tonality of their given stories. There are also boatloads of fantastic pinups that get better as the book progresses. My favorite pinup being three-way between Damian, Bruce and Talia.