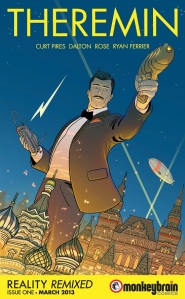 Research, time and love went into this tale about fracturing the universe through a musical instrument that seemingly requires no talent yet exacting precision.

Confused? I was too when writer Curt Pires reached out to me. I’ve heard the THEREMIN a multitude of times and you probably have as well. It has provided the soundtrack to a huge hunk of Sci-Fi movies over the years. Think the grandfather to the Casio synthesizer. However it operates completely sans keys or strings. Here’s how Wikipedia describes it: The THEREMIN is rare among musical instruments in that it is played without physical contact. The musician stands in front of the instrument and moves his or her hands in the proximity of two metal antennas.

Now, what does this have to with comics? In a very Grant Morrison like twist of plot, Pires takes this seemingly innocuous piece of musicality and uses it to open the doors of time. Then, in a very Harry Turtledove way of rewriting history, Pires takes real world events; makes them infinitely cooler than what really happened; and finally changes the course of mankind…kind of.

Using Leon THEREMIN as his protagonist, Pires transforms a Siberian science geek into a temporal James Bond. The book begins with the end, meaning we get to see the moment Vladimir Lenin bites it. Most said his death came from syphilis or a stroke, but Pires postulates a different theory. What if Vladimir was killed by his own think tank who are able to witness the madness he would unleash upon the world unchecked?

I’m a big fan of “history” explored through conspiracy theory. Probably because a piece of me believes the kooks and whackos of the world, while my conservative side says, “Nope, no underlying thread, the world is what the world is on the surface.” It’s a very confusing and non-committal way to live, I don’t recommend to anyone. The only virtue is that it allows me to read stories like this without the propensity to balk.

So if you believe Lenin died of a stroke and that science is used for good and not evil just keep walking along to the next review.

Pires delivers with exacting precision the days after the first world war when Russia pooled scientists together to protect their borders through automation. And sure enough my old friend Wilkipedia tells me that’s what the real THEREMIN was working on when he discovered his touch less musical contraption.

Now in the real world, that’s as far as it went…a cool new way to make music. But THEREMIN (the comic) sends our young scientist to the Red, a place between places, where man can walk into different time periods like stepping through a door. When showcasing his new technology to Lenin, together the two see a very dark tomorrow and a fire growing in Lenin’s belly to prevent it.

I have little doubt Pires will find cool ways to fill the middle of this series, he’s given THEREMIN (the man) a very deboinaire, but also nerdy cadence about his speech and mannerisms. Basically, his inner dialog is an interesting way to read the world that was. Also, Pires throws in some very cool super forces that were, but wield weapons that have never been to serve as antagonist.

All things are not perfect though in the land of harmonics, Rose’s pencils sadly are not up to snuff. He has a fine feel for sequential storytelling, but the lines are way too rough and vague for a standard price of admission. I look at a comic this way; you’re paying for one third art, one third dialog (voice), and one third plot. Yes, there are exceptions like silent comics, so in those instances just divide my formula by half if the silence makes sense thematically (if it doesn’t though, you were one third ripped off – nuff said?).

Now THEREMIN is only .99, so in this case I say buy buy buy. Were this a full pricer though, I would say Rose needs to spend more time on detail before coming back to the big show though.