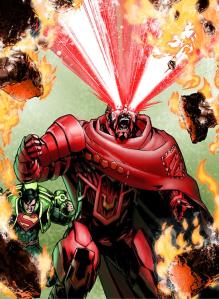 “Kneel before Zod!” No, seriously, get down on the ground, this issue was pretty damn good. There are definitely two thematic flavors spinning out of this villainous decimal month: origin and now. ZOD is a tale of how the baddest Kryptonian since H’EL became a denizen of the phantom zone. The plot is a bit muddled, but I’ll forgive any fumbles when a touchdown is scored on characterization.

If power set wasn’t enough to make Zod and Superman opposite sides of the same coin, we learn that Zod was also a descendant of the science caste on the planet that was. Both of Zod’s parents were scientists and brought him on an expedition to one of the more wild satellites in the Krypton solar system for a little Xenobiology research. Basically the parents die and Zod is left to fend for himself until a rescue craft with two brothers from the house of El pick up a distress beacon. Pak pulls a nice surprise at the end as well to show that nature plays a part in Zod’s bad assery, keeping this from being a straight up Tarzan in space.

I’ll tell you tough, it wasn’t the origin or the way Zod takes control of the army that entranced me. Yes, the origin was fun and yes watching him plant evidence so he can start a war with a race of people that can only hit with sticks was more than evil enough, but what I loved was the pageantry of Krypton.

Between the beats there are some great political machinations at play between the castes. Especially interesting was the relationship between Jor-El and his brother. This aristocracy on the verge of collapse more than resonates with real world sociological trends, which always makes for good comic booking. Also, Lobdell’s back stories about Jor-El over in SUPERMAN makes for a pretty cool science/action piece, something the DC stable really doesn;t have right now. Sniff…Sniff – do I perhaps smell a new World of Krypton brewing in the idea ether? Good book, but again I did have to look closely to see exactly what Zod did to piss everyone off so much. 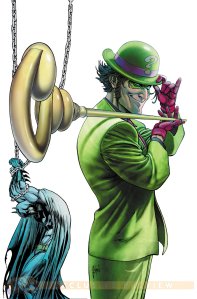 My favorite villain book thus far. I should have known Snyder and Fawkes were in the driver’s seat with the quality of this puppy, but since the credits live in the back this month I wasn’t sure if we had a new rising star on our hands.

Edward Nigma received one of the freshest makeovers in the New 52, completely abandoning any past incarnations as a Joker pastiche with simply a penchant for puzzles. Where Joker is sheer lunacy Riddler is cold and calculating, he’s simply so smart he has an OCD compulsion to keep his brain busy with puzzles. He’s also a petty man as opposed to an outright lunatic.

This whole issue takes place in the now, but is retribution for what was. Anyone who hasn’t been following Zero Year in BATMAN might be a bit lost on motivation, but that shouldn’t stop your enjoyment of this solitary black diamond. Basically Nigma was a process efficiency consultant for Wayne enterprises when Bruce was on his Rumspringa before coming back to don the cowl. I deal with these sharks on a daily basis because of my day job and I’ll tell you now, Snyder has nailed it. Basically the jig came up and Nigma ended in prison.

So this is retribution against Bruce and a certain Wayne guard who once worked in Arkham during Nigma’s tenure. The issue starts with a series of riddles and the answer to each helps Riddler in his scheme – all clever, all apropos. Now for some reason, and with that kind of bleed in you know I question the choice – but beyond his two fold mission of success he opines for the Batman to come play. Too Jokery for me. Too many obsessed criminals to the point of forlorn love will become a cacophony white distilled noise instead of an emotional gut punch.

Haun deserves a special shout out for Nigma’s new yet respectful of yore visage, and for making what’s basically a guy going to the top of a building as exciting as Die Hard’s decent down one.

When playing RPG’s if I’m given the choice between a rogue or a warrior I always backstab before bash. I share this strategy because apparently DC agrees with me. We don’t know Lobo…all the comments about him joining weight watchers and being more village people than biker bar are true…and not. Basically our favorite Czaranian wasn’t the last of his kind. There’s another survivor – Lobo.

So if this sophisticate laser katana wielding is the biggest and baddest bounty hunter and smuggler in the galaxy who is the bastiche who pwned our longboxes back in the 90’s? Who gives a shit, the new guy is way cooler. Where Ole is a lout New is a cad. Both can obliterate a room, but new Lobo is a graceful ballet compared to the old Lobo’s tank like ploughing. All of these character traits come alive as well as new Lobo’s complete lack of a moral core as we watch him commit some xenon-trafficking. The payment for this mission is the location of Lobo the Lesser.

Part of whether you can move forward will boil down to taste, Personally, I’ve always hated any Lobo-likes in real life, so I’m happy to see the troglodyte retire. I guess I shouldn’t jump to any assumptions, but I would love to see new Lobo transplant.

I don’t remember reading any of Ms. Bennett before, but I hope this isn’t a one-time gig. Her structure is beautiful and dialog more than engaging. Watch out Ms. Simone, you’re not the only hen in the cock house anymore.

Poor Vril’ Dox, I’ve always had a soft spot for the old L.E.G.IO.N., but I do understand time moves on. It just pains me to see a man who once struggled to understand the plebeians beneath him want to crush and possess them instead.

We learn in this issue that smart people are really friggin scary and no one should trust them. The story of Vril’s evolution to Brainiac is standard but appropriate: he’s basically a scientist who has no moral boundaries in his path to personal enlightenment. Experiment on my child, sure. Divorce my wife, sure. Hijack my prison ship to enslave a portion of my people and destroy the rest – Vril, like Honey Badger does’t give a shit.

Now, what he’s pursuing is interesting from a book and universe perspective. Basically refugees from a war in the 5th dimension have bled to ours  and they are devouring planets one by one.  Vril’s mission is to stop them at all of the aforementioned costs until the obsession finally devours the man.

BRAINIAC didn’t get enough attention during ACTION in my humble opinion and it’s nice to see this old staple truly unleashed at the inception of his evil.

Oh and don’t judge a book’s art by its cover, Brainiac looks nothing like a black fun house slide in the actual issue nor is Superman even present.