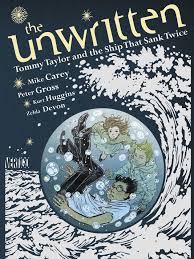 If you’ve been following UNWRITTEN, the book whose veneer shines of pastiches that range from Harry Potter to the Books of Magic, you must buy this original graphic novel. Not only is it gorgeously crafted with its hardbound cover and high-gloss paper, this is essentially the Rosetta Stone to the mystery of how Tom and Tommy Taylor came to be. It’s the insight into their father, Wilson UNWRITTEN fans have waited a very long time to see.

If you haven’t been following this book, chances are you shunned it for the very pillars I used in my description.  But I’ve never seen UNWRITTEN being about magic or simply a cautionary tale for Daniel Radcliffe. All of that ended after the first story arc. UNWRITTEN explores the very inception of ideation and creation. As a man without much mystical or spiritual faith, I have always questioned whether humans create what we dream or if we are simply conduits receiving signals to facilitate a grander plan. Carey seems to have no such waffling (at least on paper), what man creates can and will come to fruition through story then in true form.  It’s the Tinkerbell concept taken to hyperbole; if we all believe at once – the public zeitgeist can make any flight of fancy as tangible as the nose on your face.

All right enough of the meta. The actual story lives in a duality between Wilson Taylor’s creation of two mystical boys and how much easier it was to create the fictional Tommy versus raising the real Tom. Writers well know the torturous existence our stories create for our souls and personal lives. We live in ideas and very often those ideas close out the rest of the world around us. When locked in imagination it’s very easy to lose those that have honored us with their love; they don’t know the story and their needs get in the way of us releasing the story on page. For most writers this drive isn’t malicious or calculated. We simply need space. Wilson Taylor is the opposite; in his drive to imbue a real boy with magic he used all those around him until his soul and theirs were completely spent. Through journal entries we see the beginning of Wilson’s plan unfold, while the other half of the story tells the origin of Tommy Taylor and his discovery of the magical spark.

It’s hard to tell which story was the better of the two since both tickled different parts of my cerebellum. Despite their connective tissue of magic’s inception they can certainly be read very separate and apart, especially since we are now well into Tom Taylor’s journey after cresting the 50th issue mark recently. Creating magic in the real world is a twisted dark affair wrought with a Machiavellian usage of real people to serve Wilson’s ends. Tom’s Mother is a nervous break-down waiting to happen until it does and Wilson like Honey-Badger doesn’t give a shit. The boy who would one day become a wizard also spends the first two years of his life in relative solitude. Even if one takes away the story deprivation tank Wilson crafted to infuse Tom with copious amounts of literature through osmosis, his time outside the tank is just as lonesome as Wilson builds an empire and transforms the fabric of reality. The cruelest measure was fitting Tom with a pair of spectacles for his first birthday without even a hint of myopia in the lad. But as Wilson explains it, the reflection must be perfect.

Tommy’s story on the other hand is brimming with optimism despite his hardships before discovering the magical spark. An entire world changes when Tommy discovers his true gift of magic, making Harry Potter’s Christ aspirations seem very limited since the muggle world doesn’t change one iota after Harry defeats Voldemort or discovers he’s special. Tommy is also far more heroic than his borrowed personas. Despite his parents passing, then subsequent servitude at the school of magic, there’s an air of confidence and surety we never saw from the boy under the stairs. Tommy is far more of a leader to his Hermione and Ron as opposed to a scrum player.

It’s funny; Carey actually doesn’t give himself enough credit for just how wonderful and original the THE SHIP THAT SANK TWICE truly is. In one journal entry Carey speaks through Wilson about The Books of Magic and other properties he borrowed from, so capturing public imagination would come easier. Also, Carey stated in a recent interview (or in my PR letter, I can’t remember which) that he was happy he didn’t have to create a full narrative for this first foray into the Tommy Taylor novels. I personally thought this was a pretty flushed out story, which while borrowing from other sources, is truly and wholly original. Especially the ending of the book where Tommy basically imbues his entire world with magic. Even if this book one does borrow heavily from the Potter novels,  book two will certainly be something wholly unique. That last line is a hint. I would love to read the other six Tommy Taylor books. I’m not sure I want to see them tomorrow, but perhaps after UNWRITTEN has run its course?

The art is spectacular as expected. It’s clear when the pencil changes hands, but since the book lives on two planes I wouldn’t expect any less of a shift. The world of Wilson and young Tom is as dark and foreboding as one would expect from my descriptions. It’s also a lot of close-up shots of man about to sell his soul for his beliefs. The world of Tommy is as light and effervescent as the hyper-colors on J.K. Rowling’s creations. A charcoal like dream melting into your eye sockets.

As I stated at the beginning, this book is a no-brainer for current UNWRITTEN fans. However, after this reflection I’ll say you truly NEED this book to understand the full UNWRITTEN story. Wilson came and went from the main comic so quickly we never gained true insight into his megalomania. Also, any true UNWRITTEN fan should want to spend some time with the books that have given our favorite protagonist such trouble throughout his life. If you’re new to UNWRITTEN, you’ll actually get what’s going on, but I don’t think you’ll care as much as true fans of the series. So buy TOMMY TAYLOR AND THE SHIP THAT SANK TWICE, stick it on a shelf, then go buy and read the first two or three trade volumes.