If you missed my first Con Report from this years’ New York Comic Con follow this link here and then come back and read this second chapter in my trek! Day One ruined my feet; this is what happens when one dresses for style versus comfort. I applaud the Cosplay girls (and I guess some of the guys) who hit this thing in seven inch fuck me pumps. Though to be fair, they spend most of the day posturing and posing whereas I moved across the entire center between Artist Alley and the Main Floor to talk to as many creators as I could before the closing bell.

Given the fact my pinky toes were bleeding into my shoes (literally), I took a slightly more relaxed approach to this day. Spending a little more time with creators, banging out a scheduled interview, and actually sitting in on a panel.

First stop though was the main floor while I had some energy!

KILL SHAKESPEARE – I have a personal history with this title. As a theater major in college I grew to abhor the bard, so I have dickishly avoided all requests to review this book that is actually wildly successful and well praised. I asked the guys how they would sway a naysayer like myself to imbibe the three volumes already available, they kindly said, “it’s an awesome action adventure if you like books like FABLES. If you hate the bard, look at your 8th grade teacher and shake you your fist at them for making you that way.” I retorted I’ll bite my thumb in protest or throw a cabbage. Nerd laughter ensues. Pictured are creators Anthony Del Col & Conor McCreery. 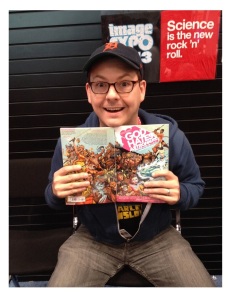 Ryan Browne – Ryan was signing some MANHATTAN PROJECTS issues and hocking his new title GOD HATES ASTRONAUTS from Image. This time around Ryan is taking on writing and art duties to tell the tale of super powered narcissist who are charged with policing barn storming farmers who keep trying to launch themselves into now commoditized space. There’s also talking bears and other crazy shit. Originally a Web comic, this hard cover collects the entire series with some surprise guest artists thrown in for good measure. If you’re too cheap to buy the book you can read it online.

David Schulner – Author of CLONE from Image about a protagonist who is part of a government cloning conspiracy. With eleven issues under its belt, the book was just picked up by NBC for a series with David and Robert Kirkman at the helm. 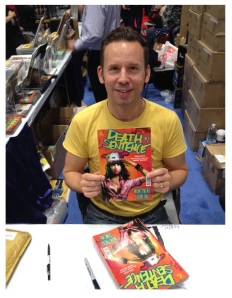 Monty Nero – DEATH SENTENCE is Monty’s brainchild from Titan Comics. The book explores a world where an AIDS like virus gives you superpowers for 6 months before you shuffle off your mortal coil. What would you do with that precious time and who would try to stop your before your 6 months are up?

Smoke, 2 Tanqueray & Tonics break so shit can get real down in artist alley where no PR wonks are around to keep things moving. 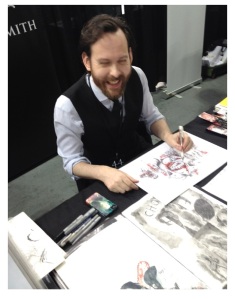 Ben Templesmith – I loved Templesmith’s work on TEN GRAND, but he’s no longer on that anymore. A big to-do amongst con chatter by the way. Here’s Ben doing some great technique with blood work on the page for a commission. He basically spits it through a straw for a true splatter effect. Get a commission, get some Ben DNA. I also like this picture because I feel like I genuinely made him laugh and spit some blood on the table. 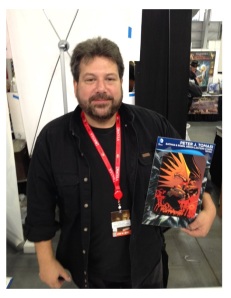 Peter Tomasi – Peter worked his career in reverse from editor to writer and frankly I couldn’t be happier. Damian Wayne basically lived in two books in the New 52, BATMAN INC and BATMAN & ROBIN. All along though, BATMAN & ROBIN stood shoulders above for the heart and trueness of a little boy fighting against his gruesome nurture. I tried to get Peter to spill the beans on when the BATMAN & INSERT SOMEONE ELSE HERE would be ending and he said soon. When I asked him if it would be Carrie Kelly, he laughed at me and mimed zipping his lips. You won today Tomasi.

BAD KARMA – Kickstarter done good. This 200 page hardcover is the culmination of four creators bringing together their ideas in one beautifully rendered trade. The guys were mum on the overall plot, but I did peruse some of the art and it is beautiful. Pictured are Alex Grecian, Jeremy Haun, B. Clay Moore, and Seth Peck.

J. Michael Straczynski Panel – My devotion to JMS stories is no secret. We’ve done about 6 interviews together and I always pester him personally when I know a new book is on the way. Here’s the thing though, instead of ignoring me, he actually responds. Granted if it’s a book like EARTH 1 we need to vet things through proper PR channels, but when it comes to creator owned stuff like JOE’S COMICS, the man is a machine of deep and honest responses to even my most ridiculous of questions.

I abhor panels and I hate lines even more. Thankfully they put JMS in a big enough hall there was no line and secondly once the door shut, this was a conversation not some PT Barnum like spectacle like the GUARDIANS OF THE GALAXY screening (and screaming happening next door).

As much as I’ve “hung” with Joe and read his work, I realize I am but balls deep in one of Joe’s many genres. When he finally opened up the floor for questions the Babylon 5 flood gates opened wide, along with a shit ton of movie questions. There was also some Dutch kid that kept trying to make him eat cookies. I would say I wish I were tripping if it I didn’t feel like I already was. Joe ended the, hell let’s call it what it is, the discussion, with some very uplifting words about following one’s dreams and handing out copies of the newest Joe’s Comics title, PROTECTORS INC #1.

Back to Artists’ Alley I go!

Glen Brunswick – I love talking to creators who offer me a copy of a their book and my quote is already on the cover. To be fair though, I only read issue 1 of Brunswick’s NON HUMANS. We still had a good laugh though. I rectified my 1/5 review and gave the full TPB the review treatment last week. I love the concept of dolls coming to life spurred by humanity’s imagination so I was happy to see the tale come to a close. In addition to volume 2 of NON HUMANS coming out in April, Glen also recently wrote REALITY CHECK, the story of a creator’s super hero coming to life and not having a freaking clue what to do. 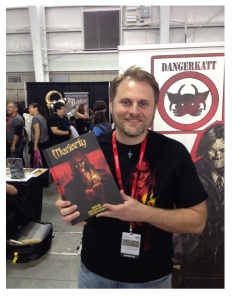 Daniel Corey – Author of MORIARTY from Image was selling the recently dropped trade. In Corey’s world, Moriarty wins at the falls and must find meaning without his greatest nemesis. For anyone who read the first two volumes and enjoyed them, help Daniel out by contributing to the volume 3 Kickstarter campaign.

Peter David – I simply love this man, he hits all the East coast cons and hasn’t seemed to age a day in the 7 years I’ve been pestering him for Ain’t It Cool (An even more remarkable feat at this con giving the recent stroke nonsense. Personally, I don’t buy it, he was Peter through and through) The coolest thing about Peter is that he talks all original properties at his table despite having written one of the best X-titles of all time, X-FACTOR. At this show Peter was all about SIR APROPOS OF NOTHING, the tale of an amoral knight thrust into destiny despite his best efforts to simply make a galleon. IDW has released the graphic novel version or you can read some of those non picture books to learn more about this less than chivalrous knight. 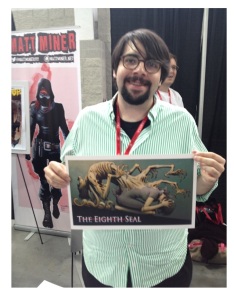 James Tynion IV – It would almost be easier to list what isn’t Scott Snyder’s protégé doing right now for DC? Starting as a back-up writer for one of the best runs DETECTIVE Comics has ever seen, he has now moved into the big chair in RED HOOD & THE OUTLAWS and the recently announced BATMAN ETERNAL (for more on B.E. read my interview with Scott Snyder). In Artist Alley though, the guys like to talk pet projects; James’ is a web series called THE EIGHTH SEAL where politics is infested by things that go bump in the night.

Ironically I now had to run across the building (make that hobble) for my 3:15 with Tynion’s Obi-Wan, Scott Snyder. I’m not retyping the full interview, just go here to read it.

I’ve been to enough cons now to know when the shift times flip. After my interview with Scott I knew I had an hour to kill before there would be new folks to talk to in Artist Alley. I hunkered down in the press room with my cohorts Ambush Bug and Matt Adler to plan the evening’s shenanigans.

Drunk, I’m now drunk. Fuck you, Ambush Bug. And fuck you Matt Adler for laughing at the lushes. My feet feeling fine at this point I stumble to artist alley in hopes of some last few coherent conversations. All of you have my deepest apologies from this point forward. 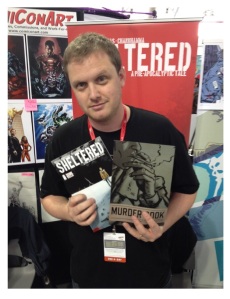 Ed Brisson – While best known for his new Image book called SHELTERED, a tale of the pre post apocalypse gone wrong, Brisson was also at the con showing off some of his pre-discovery titles like MURDER BOOK and COMEBACK. 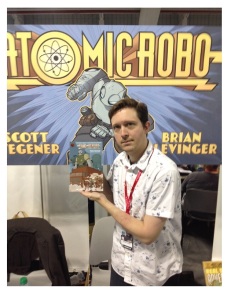 Brian Clevinger – ATOMIC ROBO is the name of the book and it is already 8 volumes strong. I know a ton of people who are fans of this little indie that could which is an amalgam of every 80s adventure you could imagine all wrapped into…a robot, so this is shot is for you folks. 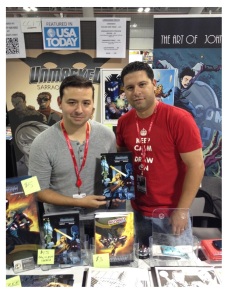 UNMASKED – Mike Sarro and John Broglia. Another Kickstarter team done good. UNMASKED is about a young journalist going around unmasking new heroes who have no problem with killing. She does it all in hopes for a return to the true golden age of heroes. Get volume 1 now from Arch Enemy Entertainment before volume 2 launches. 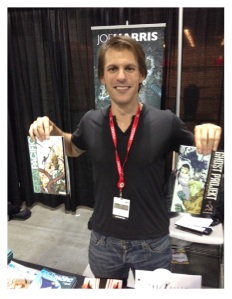 Joe Harris – Last, but certainly not least Joe Harris showed off his Image series GREAT PACIFIC, his IDW X-FILES project and GHOST PROJECT from Oni Press. GHOST PROJECT was intriguing not only for the fact it is being courted for TV, but also it’s just a cool concept about weaponized supernatural beings built by the Soviet Union during the Cold War. Flash-forward to today and the cadre is unleashed on the world by a few bumbling thieves.

And with that the closing bell rang and I hobbled back to my hotel to recharge for an evening of parties and glad-handing. NY Comic Con 2013 I thank you for an experience I will never forget.