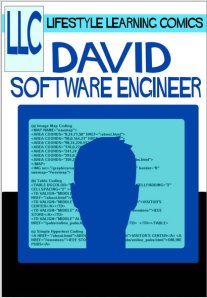 Even though we all live behind pseudonyms of anonymity so we feel protected as we fling vitriol at comics, everyone reading this comic review column has another life. We’re parents, professionals, educators and protectors. DAVID SOFTWARE ENGINEER was developed by one such individual, who while enjoying the fantastical feats of caped crusaders, is also a person behind the fanboy, a person who recognizes that comics can transcend beyond fiction to deliver a practical messages of good to better society. DAVID SOFTWARE ENGINEER is exactly what the name implies, it’s the story of a young man who is fostered by friends and family alike to pursue a career in science, technology, engineering and mathematics (STEM).

I made the same realization about the power of comics 5 years ago. However, I’m a corporate whore who has developed my comics to pad the pockets of rich white dudes. Despite my profession as marketing slut, I still want to promote good in the world with the remaining hours in each day. The US and other predominantly white countries have fallen so far behind the STEM curve it makes Neil deGrasse Tyson create a new YouTube video annually about our collective downfall. Paris Gamble, the author of DAVID SOFTWARE ENGINEER, has heeded these words and done something about it. For this reason, I shun my comps and other pleas for caped reviews – because it’s really important for books like this to get notice. Kids love to have their parables for life flow through a story instead of a chastising and wagging finger from their elders. DAVID SOFTWARE ENGINEER isn’t perfect, but its important message far outweighs its few foibles.

David doesn’t want to be a software engineer, in fact when we meet him a few months before senior year graduation for High School, he doesn’t want to be much of anything. He’s not lazy, he’s just amazingly directionless. His Mother and Father aren’t much help, they’re not bad parents, they just don’t know how to motivate David to find a direction in life.

Fortunately David finds inspiration from his peer math tutor, Carlie. While she becomes frustrated at his lack of ability to remember algebraic formulas, she does notice his panache for programming his scientific calculator to play tic-tac-toe and other rudimentary games. She’s also smitten with David, so he not only got a prom date, but someone who genuinely cares about his life. She’s that type of girl we all hope top eventually find, but usually don’t until college after both sexes have matured a bit (at least that’s how it worked for me. “Rob, you’ve been carrying 6 credits for two years so you could stay in college to act in plays and bang Freshman?” slinks away to buy an engagement ring and finish credits).

Carlie is important beyond her STEM sell to David, the bits with the prom, crush and eventually marriage help the book feel more like a real story than some preachy PSA. These moments were genuine and quite frankly beautiful as we David and Carlie’s path every few years after High School until they end up working for the same company and finally becoming man and wife. I was actually quite amazed how deftly Pulfer slowed down and accelerated time in this piece to hit the high moments of David’s life and the overall benefits of the career message. Perfect pacing is what the kids call it I believe.

There are a few moments that aren’t perfect. I caught a few typos, which are really possessive faux pas, one editorial pass would catch them (obviously). The art is rudimentary, but never transcends to amateurish.

Even with my nits I applaud this book. We need more of this material, where it’s focused on passion towards a cause instead of a blatant cash grab. It’s clear this is a labor of love and I encourage those of you with who are educators to give this book a chance in your classrooms. I also encourage the creators to get crackin on a femal protagonist toute suite, so hopefully we can correct the gender imbalance in STEM careers.