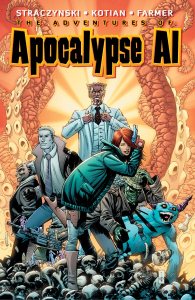 As much as I love JMS’ writing, there’s something that else that compels me to play a megaphone heralding his work – candor. Joe is one of the last strongholds of no bullshit, he tells it like it is even when it comes to his own foibles. Our steady stream of bitching about delays (THE TWELVE), boredom (SUPERMAN walking) and continuity cataclysm (totem SPIDERMAN) are all subjects Joe will gladly bend your ear on for hours and never place scapegoat shields in front of him. It’s important to understand this fact when reading APOCALYPSE AL because Joe is once again taking a no bullshit approach to correcting a common comic book cluster fuck – retailer ordering.

Not to belabor the point, but I think a bit of context is in order. Retailers must order books months ahead of time from a little book called Previews in most cases. Previews offers not a morsel of actual information about books, each title is articulated with 50 words of pure Public Relations pabulum. To leave retailers and ultimately readers further in the dark, publishers place gag orders on folks like yours truly so we can’t open the kimono on pieces until release date in stores. A few publishers, OK one, Titan Comics, has broken this model by at least giving reviewers open speaking rights about books when they are about to come out in Previews. And you know what, it’s worked. They’ve gone from 0 to some big sellers in a short time through this open information sharing. Now, Joe’s Comics is taking the same approach, but expanding it several thousand fold. Not only has Joe thrown reviewers worldwide an issue of APOCALYPSE AL, but retailers will also be getting a copy this Wednesday BEFORE they have to submit their February Previews’ order. Everybody loves free shit, I predict the simple good will of this gesture alone will help Joe’s Comics move more copies than any of the other #1’s from the imprint released this year.

All right, I’ll get off my soapbox, let’s talk about the actual book. When last we left Joe’s Comics I had reviewed my NYCC copy of PROTECTORS INC. Not a bad book, but parts and purpose left me scratching my head. Again, I say “not a bad book,” but that’s a relative statement. Other Joe’s imprints like TEN GRAND and SIDEKICKS are spectacular books, so PROTECTORS had a very high benchmark to live up to. Even though, I only went through a B&W version of APOCALYPSE AL, I’m putting it up on the spectacular shelf.

I’ll skip the PR blurb, because when you read it you’ll have a hard time discerning between APOCALYPSE AL and TEN GRAND. Both deal with the mystical and things that go bump in the night. Annnd…right there is where we end the comparisons. Superficially, Al is a woman (aka Allison) where our hero of TEN GRAND is a dude. Dig a little deeper, Al is a late twenty-something serving an ancient family legacy to keep the world safe from demons. Joe, the hero of TEN GRAND is serving the world to meet his own ends of salvation for him and his deceased ladylove. Plus Joe is a dude in his late thirties/early forties. Anyone with enough time on this earth knows the difference of mindset a twenty-year age gap brings, even if we’re too fucking stupid to realize it when it comes to second marriages. Salty versus sweet would be the culinary description between the two protagonists.

There’s also a geographical shift between APOCALYPSE AL and TEN GRAND. TEN GRAND is all New York, a dark and gritty land suffocated by grittier people who bathe in a brutal honesty with one another and life itself.  Al is all L.A. baby; the demons have all the permanence of a back-lot set and are as equally three dimensional. Al is fully realized, but she’s leagues of happy happy joy joy above Joe. There’s something about constantly being exposed to the sun that makes people infinitely happier and far more optimistic about life even though Al mainly deals with and in death.

Quirky side characters make for better main players. It’s for this reason I beg for character parts versus leading man roles in my annual trip back to the footlights of community theater. Bit parts have the best lines and are often remembered long after the main characters fade into the memory ether. Al has a whole host of these friends that help her on her way to uncovering the absconding of an apocalyptic set of keys that will tarnish Tinsel Town and eventually the rest of the world (kind of like the Kardashians have already). A dead LAPD cop feeds Al intel, and is the voicebox for the shadow organization that has been feeding her father and his father before him jobs against the paranormal. She has a homeless seer with no filter on his prognosticating so Al gets ten times more mundane information than actual leads or clues.

I think (hope) I’ve said enough to entreat retailers into stocking the shelves with the next Joe’s Comics creation. If not, let me say that JMS has given us a strong yet still feminine protagonist. She is as equally cavalier as serious, and is just as conscious of her style as her character. As a man married to a shoe connoisseur, I’ll give JMS uncanny accuracy as Allison gets lost in a dream where she’s a temp forever stuck in sensible footwear. Kotian does a great job with expressions in this book. JMS deals on many emotional planes when he writes so getting the facial structure to deliver snark coupled sincerity is no small feat, especially when some of the faces are half rotted or from a nether realm.

I’m saddened by the fact this is only going to be a 4 issue miniseries. Apparently this book was in line with some special partnership for MTV Geek. Don’t know, don’t care – I barely knew MTV Geek existed before it went away. I’m really pissed because there could be a great intertwining between this book and TEN GRAND, the yin and yang of demon hunting would give a nice waft of cohesion in drawing the Joe’s Comics universe together.

Sorry, I’m not an editor, just a reviewer. BUY THIS BOOK, you’ll love Al instantly and will be totally on board with the ultimate antagonist that appears in the final panel.