I have waited five years for MULTIVERSITY. I feel as though my dreams of what this title would be though, are a far cry from what it is in this iteration, but I hold strong promise for what it could become. It’s not that MULTIVERSITY is bad, it’s just starkly reminiscent of this: 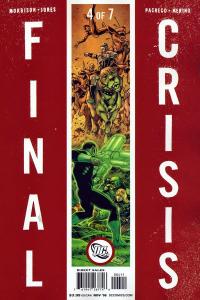 The moon weeps as Darkseid gets in Turpin’s pants.

God bullets fired from the gun of Kirby shatter the illusions of shackling continuity for a new dawn of infinite confusion.

Horsedogs ride the night, Their battle armor under a red son,

Boobies and boots, A Marvel versus an El. If only they didn’t fly, Then Jello their battle would be bathed in.

The Rubik’s Cube of discord realigns the trinity And bleeds through the parallel universe lava lamp.

The death of the Bat,  Resurrection by a naked aborigine.

My pea size brain can comprehend concepts of math that destroys or grants life. I can also even understand and honestly truly appreciate Sci-Fi Silver Age goodies like spaceships made of frozen music powered by harmonic drives. If this was all the 5th age were, and I still had the option of 52 x 52 Elseworld story writers crafted by more grounded writers, all would be grand.

The 5th age though seems to be the final shattering of the 4th wall. Like the powers wikis and social media gave the common man’s voice on the media waves, MULTIVERSITY is saying WE, you and I, the readers are now literally part of this world beyond just our imaginations.

Why? Kurt Busiek pulled a similar trick recently within the pages of his ASTRO CITY relaunch as well. But Kurt has always played that line, and more broadly not once have his books been heralded as the salvation of an entire comic line. I find it interesting though that this is the evolution towards the definition of our next comic epoch. If you thought the Dark Age of 1986-2000 shattered the illusion of comic hero infallibility, I’ll tell you now the kimono was only open just enough to see the tip folks. MULTIVERSITY says there is no longer any veil, that we are one with fiction.

After reading MULTIVERSITY last night I have since: helped our APAC office build a powerpoint deck for a CIO conference in a few weeks, walked my dog, sang some “once more with feeling” with one of the neighborhood kids while they petted my dog, listened to my Father tell a fascinating story about the hunt for a beaver in their retirement community and finally banged out a review in a meeting where I shouldbe looking at % marks on the screen. I’M NOT IN THE COMIC BOOK. MY LIFE HASN’T CHANGED. LIES!!!!

It’s a cute concept in theory and I’m fine with it being a fun facet for the three year olds clamoring to read Morrison books, but this is the crux of a story that has been touted as salvation twice now. After I saw the grand and glorious multiverse map big bang out of San Diego, I honestly was waiting to see MULTIVERSITY come in and devour the New 52. However, with this clear direction of talking directly to me through the pages, I beg that my predictions never become reality. I don’t understand the shame in simply telling some cool freaking Elseworld stories where Superman is a rabbit or Aquaman has boobs.

The MULTIVERSITY plot is quite simple; this is the forming of JUSTICE LEAGUE E. The Earth 23 Baraqaman, a character named Thunder from Earth 8, a Flash here, and an Aqualady there, you have a team that’s ready to go off and fight the threat of the last Monitor (remember the days of Pre-52 when the Monitors were reborn, then died, but formed 52 worlds, earth, universes that we only saw like three of over the past five years. Sweet Judas’ nuts I just lost my train of thought). These are the story elements I find alluring. I was delighted watching President Supes drive the JLE’s Frozen Music ship to see where a small knowledge of jazz will take them. Hell I even liked Captain Carrot whose universe is all cartoon physics based, and Dino-Cop, the character I’m sure Eric Larsen will file a lawsuit over. I am even on board with the fact that each character is a comic book piece of fiction on the worlds of their fellow team members.

Given this strong foundation, given the fact Elseworld fangeezers like me will buy the 52×52 titles DC can pump out (not even counting the stories that could take place in The Bleed and other ethers of the grand cosmic map), why the sweet hell was there this need to destroy what is supposed to be escapism by drawing us back in?

MULTIVERSITY holds such promise, but this issue promised me last night I would wake up in some grand adventure beyond my imagination and instead I simply woke up to the same grand adventure I live every day. Perhaps I am not seeing the grand plan here, but I also don’t need one if the goddamn story didn’t insist it would be there.

Unless Morrison has a way of unleashing the forces of Brainiac on the world this Christmas, I am casting aside about 15% of MULTIVERSITY 1 from my brain juice because I read comics to escape the doldrums, not be told that my doldrums are going to be saved by a group of heroes we all know will never literally come.

To keep getting my dollars MULTIVERSITY, I need a lot less talking to me and much more Elseworlds entertainment.