Philadelphia PA – September 24 2014 – As students return for the fall semester with their iPads and Androids in tow, they’re noticing a very different mobile experience as they cross into the geofenced mobile safe zone now surrounding their school or university. 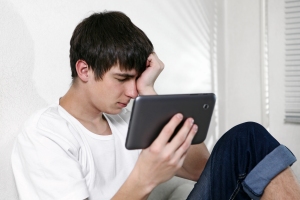 This location based force field offered by MaaS360 mobile protection ensures that when students want to use school resources for WiFi, App downloads and receiving lesson plans from teachers, they are doing so through the guided security of Mobile Device and Data Management.

And boy, are these kids pissed.

Twitter was rife with a flurry of putrid teen spirit as students found that within school systems, MaaS360 was now acting as a gatekeeper between twitter frittering away their days. However, once the school day was over and the security policies were lifted, #H8MDM began to trend with:

‏‪@2plus2equalscarrot 5h
Maas360 is so stoopid, no more #minecraft in history

While we did not get a direct quote from MagikMaster765, his outrage against his parents is most likely indicative of the countless notices sent by schools before requesting an MDM enrollment, and the constant chiding from parents who read these notices and then tried desperately to communicate with a creature whose brain is still clearly in the very early stages of development.

Mike Cumstein, IT Administrator at Dan Quayle Junior High, had this to say about the first two tweets, “Did you know I was once suspended for wearing a Pac-Man watch to school. We’re telling the kids, they simply need to focus on school apps and you know…school, while in school. Our WiFi is not here to build your library of Arina Bieber mashups.” “On the other tweet, we started preparing for MaaS360 to handle our mobile security and app/content distribution at the end of last school year. We communicated then what we were doing in emails and message boards and continued to communicate right up until the day the kids received the text-message requesting enrollment. Here’s the thing that really makes me laugh though, they all accepted without having any clue what they were saying yes to. These kids jump into apps faster than our parents jumped into fishbowls to get a set of keys after eating fondue.” 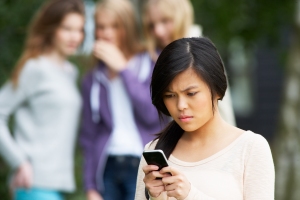 Mobile security on campuses, in businesses and any industry has evolved from pure mobile device management to encompass the entire mobile ecosystem. Features to protect and work on sensitive data has transcended this category to Enterprise Mobility Management with pure device controls for IT like block, lock and wipe becoming merely one facet of the bigger mobile enablement picture.

As other schools across the United States released deeper mobile controls with MaaS360, students responded with an almost righteous indignation towards violations of their rights. We asked Cumstein to provide a balanced IT perspective to separate truth from mere petulance.

Cumstein’s Take: “Correct, MaaS360 can block apps by location with geofencing or even by time of day. Teachers noticed uploads of themselves on FB when they were in compromising positions, so we turned it off as well.”

‏‪@ClashOfCan 12 d
WTF MaaS360? Stop my camera from working? What I do to you?

Cumstein’s Take: “You need a camera for certain classes, others not so much. With MaaS360 security policies anyone can set up that kind of contextual security response.”

Cumstein’s Take: “Oh ya, content distribution and editing. We really want this one, but our teachers aren’t there yet from a lesson plan standpoint. But with Secure Content distribution all homework can be delivered, edited and then submitted by class, groups or student. Very cool stuff. What school district was it? Is that close to here?”

While the tweets continue, it has become eminently clear that once again children are incapable of fully understanding the world or any issues beyond their myopic scope of view. Fortunately MaaS360 is in place to at least govern mobile behavior until these future leaders and ultimate harbingers of our doom develop some level of self-actualization and empathy.

“The preceding press release is fictitious(ish). Real students have tweeted hatred for MDM, and I reflected those sentiments. No one endorses or approves this post except the part of my soul that received a cathartic release from expressing the sentiments of real people in real language without CorpSpeak.”