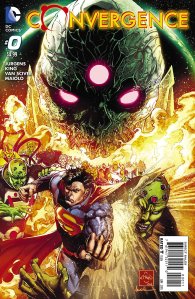 Thank you DC. I show my appreciation to creative teams constantly for melting the cockles of my heart, but I can’t think of any time I was truly moved by the simple inception of a series from a publisher. For the impatient the plot is thankfully simple, Superman of Earth prime is in the hands of Brainiac. Brainiac is an urban kleptomaniac. He’s also more addicted to puzzles than mental wards, and what a grand puzzle Superman’s infinite deaths and infinite triumphs across time and quantum strings would be to unlock for a creature always seeing the most logical patterns as its purpose.

Like the New Gods and Apokolips are constructs capable of navigating the cytoplasmic bleed between universes (see GODHEAD in GREEN LANTERN), Brainiac plays the same tricks, but ups the ante against their Godly travel beams and hover chairs to add time into his malicious of city abduction: “What’s the plan Brain?” “Not to just capture cities in a bottle, but to capture the zenith of all cities in all universes in…all…time…periods to examine what makes the idea of Superman so unyieldingly pervasive he is always spared the final fate before being born anew.

“Sounds Meta Optimous, didn’t you bitch slap ULTRA comics and every other issue of MULTIVERSITY for such 4th wall faux pas?’ Indeed, and CONVERGENCE made me realize that my disdain for the Morrison Meta versus Jurgens doesn’t stem from too far of an aesthetic distance, but frankly one that is too close. I love story. I know real life never seems to allow the story world in. From mermaids to UFOs, most of the mystical in this world stems from myopia and booze. The meta here is not breaking my 4th wall that I know can’t be, it’s breaking the 4th wall for my favorite characters. Which makes sense since SUPERMAN not Rob Patey can and has done everything. It’s a story about deconstruction, not a fucking pamphlet chiding me for seeing through the complete fucking deconstruction of heroics and then getting pissed at me for complaining the rebuild looks like the same shit from before. CONVERGENCE is apologizing in a sense for the New 52 forgetting to change for the sake of comics, instead of in fear response to Marvel studios.

MULTIVERSITY is ambitious, especially for one man. The scope of CONVERGENCE with 3D universe movement and 4D time travel would be career suicide for only writer. And I’m not talking the whole series; I mean Jurgens was wise to get King at his side for the extra pages sans any ads in just this issue.

So that’s it, in glorious and intimately character rich, but also epic in scope storytelling. A compendium in the back shows where Brainiac the mainframe has been telling his green screen dummy terminal clients of cunning to swipe cities from, but most of us have seen the checklists already to suss out the timeframes of occupying the new universe of Pax Brainiac.

Now let’s get meta ourselves for a second to see what could be next.It says the worlds are in a contest to see which survive, I buy it for the 3 as yet unannounced titles adding to the already announced Fanciful 49. I’ll take it, and honestly no longer complain about a chunk of the shelf being prostituted to new media and parent company interest. The fight is futile, and as much as I want a DC Universe brimming with a ton of Elseworlds, I will satisfy myself with restitution over a satisfying end to my comic youth. It’s infinitely healthier than petulantly pining because my desire can not bend the will of billion dollar companies. It’s in part also really really delusional.

Part of my peace is from seeing Jurgens, THE writer of my youth, a man who could so subtly weave together wisps of continuity from tale-to-tale to reward the OCD, but never deliver references so obtuse that new readers would get a real nosebleed from the metaphorical cross-sell. This unique talent of Dan’s has been wasted in the New 52 until now. You don’t give a man who used to Check Mate great stories on a three tier Star Trek chess board one flat fucking checkerboard from CVS. And if you do erroneously put Dan on just one book, you make sure it is an exploration of every quintessential moment in DC history like CONVERGENCE.

CONVERGENCE is also the first book in ages truly for comic fans with cosmic consequence. We need stories ripping apart and past the linear. Comic reader imagination is more acute than the average bear who only sees comic movies. This curse to bend the boundaries of danger, has put us to a point where the stories of city, state and even nation are simply too myopic in scope to really affect us. We have seen our own cities under fire at this point, which means comics, to meet their thrill schill of brand, frankly need to raze fucking everything from the God particle flashing until the final Kelvin of entropy hits zero across all stars.

Before I bid adieu, I must take a moment of art awe. Beauty bleeds off every page from the grandiose all knowing Brainiac mainframe belittling a much oddly older looking Superman Prime (how do I know earth designate for taunt Superman, high collar and doll part articulation points is how I know), to the moments of sincere reaching out Superman delivers to an ever changing by comic epoch Vril Dox. Another part of the Van Sciver allure for me is that I believe he’s the hardest working man drawing comics right now. Anyone who professes a desire to paint comic pictures for a living needs to hit a con and witness the exhaustive pace VS performs at to be granted A-list titles. It takes more than talent folks to turn a job into a career, dependability and desire can sometimes help balance a less deft hand’s chances. I have stood afar more than once over the years on show floors watching Ethan multitask like a 12 year old who lost their Adderall, graciously greet an fan who walks up to the table and never relent from producing new pages or commissions. I stand at a distance because I swear a lot and his kids are usually with him. I’m not a stalker, just a guy who marvels at that which he can’t do and will never ever taint kids if I can help it. The magic of youth, like the magic of comics seems to fade with each passing year as commercialization makes cynicism a core attribute.

I care about Jurgens (though he is ironically one of the last comic writers I have yet to personally kibitz with), I care about VS, I care about DC and I God dam right care about comics breaking the boundaries of convention as much as opening day blockbuster projections. CONVERGENCE is the first series in so long who also seems to give a shit about me. Thank you again Dan, truly.