Were Don McLean writing his homage to our collective demise, American Pie, in the 90s instead of the 70s, I have no doubt this cryptic poem of innocence lost would have reserved a verse for this now remastered DEATH OF SUPERMAN tome:

There is no rhyme or reason why
We fell our savior from the sky
Leaving little room for further grace.

DEATH OF SUPERMAN not only ushered in the death of comics, or at the very least, crippling of the genre, it also reflected we will never again abide sacred calves. Blame Booth, blame Nixon, blame the loss of religion, blame your neighbor; we begged for the DEATH OF SUPERMAN because the virtues he stood for were no longer a reflection of ourselves. And what are comics, at least good comics, if not the hyperbole of our imagination grounded in reflective moments of the current human condition.

Now, the maggots that crawled from SUPERMAN’S carcass were splash pages without purpose, anatomical monstrosities, die-cut S shield covers, and polybags that now feel like my Grandmother’s skin after 20 years of storage. Again though, these trappings weren’t the often attributed 90’s death of comics, simply the last Hail Mary to keep a few extra zeroes on print runs. 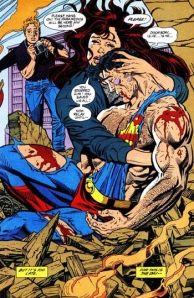 DEATH OF SUPERMAN was the true event that put all comics on a respirator and feeding tube. Where else could you go from here? This mammoth storyline that crossed the multitude of SUPERMAN and JUSTICE LEAGUE titles was like a modern retelling of the bible. You had the ultimate fight for good and evil as the cacophony of colorfully clad disciples watched unable to deter destiny. It was a prophetic march that we all knew couldn’t last and in that knowledge we learned continuity was a mantra for a forgotten era. We also learned there is no such thing as consequence when billions of dollars in toys, movies and video game revenue rests on a hero’s shoulders. Death, true death, has no room for awakenings. Comic s has no tolerance for true death, at least in 1992 they didn’t.

It’s hard not to read this book and reflect on the aftermath. But there was no doubt it captured our hearts, minds and the news cycle at the time. The last point was a true rarity in the pre-Internet days when news was actually still a somewhat precious commodity and not vomited out on blogs and web pages en masse.

1992 was my senior year of High School. I was  accepted into my 3 colleges of choice by October, so all I had left to do for the year was make lots of money at Merrill Lynch after school, buy weed with that money, get girls with that weed…and revel in comics. Back in those days we had to revel face-to-face, the comic store was a destination not a retail transaction. For hours, fanboys like myself would debate the virtues of comics with our predecessor fanmen. DEATH OF SUPERMAN kept us talking from Doomsdays’ first appearance out of the ground until the final panel of Kal in Lois’ arms. We were all mesmerized. Again, we knew even then it wouldn’t last, but the excitement of the event back when events weren’t a commodity made it a glorious time to be a collector. I didn’t realize how much the Internet has exponentially increased the quantity of comic conversations, but also exponentially decreased the quality of those interactions. It took me this reread to truly realize what made this series special.

Pacing! Plain and simple pacing. Doomsday wasn’t a stark reveal, like Monarch in ARMAGEDDON 2001. We also had no clue what was coming next. As Doomsdays visage became clearer, his swath of destruction across America became more brutal and bombastic. Starting with one armed tied behind his back, Doomsday became more than the bloke who killed SUPERMAN, he became the embodiment of fear for well over a year. In one page these artists and writers of yore told us everything we needed to know about this villain, as he first crushes a bird, then a tree, then a house and a family. Even for all of Darkseid’s evil ways, he would never sell out so-called “life” on Apokolips. Doomsday though, as the name implies, was hell bent on the death of everything. And he succeeded in spades.

I’m not a fan of nostalgia or lamenting remember when, I believe human evolution is a building experience that leverages the old and transforms it for the modern age. We’ve lost something since this time period though, and that something is called story. Writers words once flourished when the pacing didn’t have to meet the “Image” model of 3 panel pages and every other page splashes. Jurgens, Stern,  Simonson…these folks delivered character moments that had impact despite their cramped panels. I was an even bigger fan of JLA during this time then Supes himself. Seeing Ice protect a family against Doomsday in a 9 panel page delivered more emotional impact than the entire first arc of the New 52 JUSTICE LEAGUE.

This might all sound like a now Fangeezers lament, but it’s truly not. I still love comics; I love the hyper detail that the new teams of artists deliver. But I will fight tooth and nail any fool who doesn’t say this story is impactful. Not only for the words on the page, but for the way it forever changed comics…and if I can be so bold the perception of the American dream.

Read DEATH OF SUPERMAN again to remember a time when stories truly surprised us before Internet spoilers ruined our sense of wonderment when we first opened a book. Read it for the first time to understand a forgotten craftsmanship in comics. Read it for the new coloring if you choose, I didn’t see a stark difference from my muddled memories. But read it, it’s important.