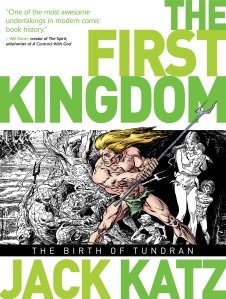 I’ve always been a modern guy, choosing to imbibe the now versus wallowing in nostalgia. Though I have my chestnuts, I only bring them out in the most severe droughts of intriguing new content to imbibe. This lust for new experience though has foolishly blinded to me to the experiences of the past. In comics, I have shunned the Golden and Silver age because of its stark contrast to the Dark Age that weaned me off of Richie Rich. Basically, I allowed my prejudice from a few hokey experiences foolishly blind me to the treasure troves of yore like THE FIRST KINGDOM. To be fair though, Jack Katz’s opus isn’t your traditional silver/bronze age fare from a Golden Age artist – it’s frankly a book for the ages about the ages yet to come. 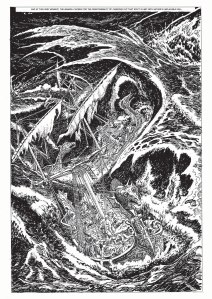 I don’t recount my preferences for self-assurance or aggrandizing, I simply know I am not alone in my distaste of all things that occurred before WATCHMEN. It’s a discussion I have had countless times in the store with my fellow contemporaries. I’m sorry guys (and one lone occasional gal) we were wrong. There’s some gold in them thar Golden Age hills, you simply need to be a patient miner. And THE FIRST KINGDOM does require patience, with its hefty page count, lushly detailed imagery and narrative heavy text, this is not aa book it’s an experience.

Borrowing from such toga clad titles as the Iliad and the Odyssey, Katz tells a tale of men and immortals and how we are all slaves to a predetermined destiny. The hero’s quest isn’t a choice it simply just is. Once you accept this, you will accept the protagonist Darkenmoor’s rise to King and the subsequent generations that will usher the next age of humanity to the stars.

The apocalypse that ushers in the birth of THE FIRST KINGDOM resonates as true today as it did during the book’s first appearance in 1974. While we’re all not as afraid of Da Bomb as were back in that more innocent age, let’s be honest in the fact we should be. Terrorism is simply a comforting bosom that has made us forget that a stockpile of destruction sits under us that can still obliterate the Earth 1000 times over. Katz presented these scenes from POV’s that keep this book I won’t say from ever being dated, but certainly not yet. A plane cockpit instead of the whole bird and mushroom clouds billowing to eternity are our demise and I say let it come already. THE FIRST KINGDOM is way more interesting than our greatest threat being a trade imbalance with China.

The lands of THE FIRST kingdom are vast and thanks to the irradiation of the Earth the monsters are more grandiose than even the ole’ toga wearers I mentioned earlier could conjure. Every threat our hero Darkenmoor (or Adam if you prefer) faces is an epic sized incarnation of today’s wildlife.

As mortals evolve once again from hunter gatherers to societal beings, they catch the attention of the Gods. Because Katz believes as I do, Gods were so much more interesting when they interacted with mortals compared to today’s distant high Father. And here is our second story, the problem plagued Gods who know more than then  mortals, but still remain a far cry from omnipotent. Honestly, THE FIRST KINGDOM made me fully understand why we developed monotheism; we needed to think someone knew what the hell was going on in this universe.

There’s so much I can say about this book as it spans generation after generation, as it’s heroes are confronted with every challenge ever used in literature and as I realized “all this has happened before and it will happen again,” but all my words will do is make me look like a sycophant. You simply can’t believe how dense this book is until you read it. Sadly I also know this denseness will also turn off some modern day comic readers. Modern readers are not used to anatomical correctness, backgrounds that can be viewed for hours and still not see all the details, and prose that must be carefully considered. I know I struggled a bit consuming 200 pages that would be a 1000 in today’s creations. 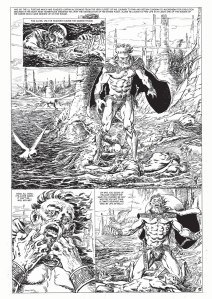 This book is black and white, but it doesn’t need the parlor trick of color to capture the imagination. It does it just fine and never lets go. Outside the story Titan was kind enough to thrown in a great bounty of extras so you don’t forget there were great names before Moore and even Lee. Old Q&A’s, interviews and photographs make you remember a time when  hair was copious  and sleeveless shirts were dress up duds for cons. THE FIRST KINGDOM is a reminder of a time when comics stood on their own merit, before they had to feed a multifaceted synergy of product lines from movies to branded underwear, a times when books themselves could be events simply because they were not because we were told so with a secondary title on the cover.