FOREVER EVIL is the crossover we have been waiting for…well…forever. That is if we all believe time began in the year 2011 with the end of FLASHPOINT. Court of Owls was good, Throne of Atlantis even better, but personally I’ve been waiting for a cataclysm that would truly test the mettle of our heroes beyond an emotional level.

Trinity War truly helped set the stage for this book in both plot and tone.  There are no subverses of light, magic, Bat or Supes — every character is going to be affected by this event as is clear in this week’s .1 holocover (if you were lucky) villainous deluge.

DC September events have become a staple at this point. Unlike the New 52 launch or the zero issues of last year, FOREVER EVIL is an apocalyptic treat for those of us ingrained in the universe. No exposition in the traditional sense and It also doesn’t waste one second jumping from the end of Trinity War to Lex Luthor flying high above…Chicago??????

That’s right kids Chi-town sets the stage for what is probably the best treat fangeezers will get this year. Lex is soaring the skies with none other than one Mr. Kord, a kind family man with a son in college who is a whiz with electronics (hint-hint-wink-wink). How DC will work two Blue Beetle’s in the universe remains to be seen or perhaps the one-half of the ole’ Bwahahaha will take on a new mantle. This could also lead to nothing at all, but you can’t blame a boy for dreaming can you?

This moment was also compelling because Lex has played a very gray area in years past. We know he’s not a good man, but is trying to make humanity self-sufficient truly evil? I don’t think so. The way he treats Pappa Kord though, leaves no room for doubt. If the company isn’t signed over, Lex will take this man to the pain destroying all he cares for before killing him. However,before lex’s schemes can come to fruition, possessed Cyborg kills the entire US power grid and let’s off an EMP blast just for good measure.

This blackout serves as the perfect cloak for the rest of the Crime Syndicate to begin their reshaping of Earth Prime into the perfect image of horror. One by one they hit every major DC correctional institution to release the hounds on a world unprotected. This is also so Crimey Superman can bust into Lexcorp to get a Kryptonite fix. Kudos to the creative team for having him grind it up and snort it like a college Freshman taking Adderall during finals.

With evil running amuck, the issue closes with a feat of SUPERMAN like daring we haven’t seen the real Supes even come close to accomplishing yet. Let’s just leave it at the world is now shrouded in metaphorical and literal darkness thanks to the positioning of an entire celestial body in front of the sun.

A NOTE ON VILLAIN’S MONTH: First off: Holocovers? Get them is you can, they do provide a unique dimension and depth to the imagery that titillated the same nerve centers as when I saw my first mini hologram on titles like ROBIN I-VIII back in the 90s. Now, before we get into the play-by-play of select titles, I have to honestly say the .1’s left me nonplussed. I really thought these were going to be issues of villains raping the land with reckless abandon as opposed to a deluge of straight-up origin stories (I know, I know…my fault for not reading Previews). Some were good, some not so good, but all in all none of them served to push the event forward. Again, decent reads in many cases, just don’t think you need these books to push you deeper into the Forever Evil story. 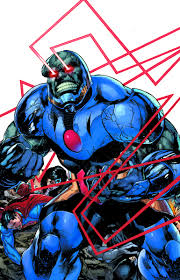 I didn’t love this book, DARKSEID’s new origin is an antiseptic story that’s simply too clean and not evil enough to convey the terror that Darkseid brings to the universe. Before he ran a planet that is the embodiment of death, Darkseid was a…mud farmer along with is Brother-in-Law, Highfather. That’s right, both of the newest and greatest Gods were…mud farmers.

Perhaps I am tainted by the recent origin of Thanos, where his pathos was given form and explored from childhood to today. I know many, including my fellow Spoiler Alert hosts, who found that to be too much of a Kimono opening. This in my opinion is not enough. There’s simply no fucking way a man with this much discontent would subjugate himself for any period of time especially not until adulthood.

Basically Darkseid sows discontent into the ears of the old Gods to get them to fight one another. I didn’t see this as a herculean feat though. First off, hey are kind of stupid. At one point mud and fire make out in a field. Next flaw, all it takes is one night for Darkseid to climb the most sacred mountain the universe and one whisper to each God to get them to turn. I’m sorry, but Gods should have more freewill than the average watcher of TMZ or the Bachelor.

So the old Gods kill one another and as a final fuck you bestow their last bit of power to Darkseid and High Father. The artists did an admirable job trying to make this story epic, but as we all know spectacle can only take a story so far.

I hope someone eventually gets Darkseid right. He scared the beejezus out pf me as a kid with his reckless regard for all life. Thus far in the DC Universe, he jumped up and went BOOM once. Oh, and he farmed mud.

Odd that this title hijacked BATMAN THE DARK KNIGHT, since this  vaudevillian Carrie has been the bane of Babs over in BATGIRL. For the uninformed this new addition to the evil line-up possesses telekinesis that she chooses to manifest in murder and mayhem. Her weapon of choice (as the name implies) is a dummy with corkscrew hands of eye gouging delight.

This character has one of the most interesting and intriguing origins of the entire .1 bunch. As the uglier and less talented of twins, her delusions started early. Her perfect Brother was gifted the looks and talents, while our future murderer was perpetually forgotten by her parents. Simone makes these moments come alive by never transcending to hyperbole. This little girl was simply forgotten, not beaten or abused in any fashion. However, this is more than enough to make any would-be diva lash out by pushing the attention whore of the clan off a swing set so the spotlight can shine where she wants it.

It wasn’t so much the origin or the bawdy mannequin who get “wood” so much you think the little bastard was actually ingesting Viagra that entranced me. Don’t get me wrong any kill killing a clown to get a dolly is aces in my book, but what I liked best was that Simone remembered there was a larger story going on than just the genesis of evil. The entire origin is told to reporter hanging from the gallows of a dressing room. The Ventriloquist is getting ready to take the stage and perform her death non-defying act to anyone stupid enough to enter her theater of lights and food during this Forever Evil crisis.

I can’t wait to see more of this character and the depravity she will wrought with her little boy toy.

Anyone remember the old Harry Chapin song, “Cats in the Cradle?” Basically, Harry laments the mistakes of the  Father being passed to the son, then watching the son make the same damn mistakes.

Naturally, the recollections of a madman should be taken with a lick of salt, but since this is all we have to go on, we’ll roll with it. In a time before he lost his face we see the old clown prince of crime adopt a wee baby gorilla from the zoo. During each step of raising Bobo, Kubert flashes back to a similar, but far more horrific hyperbole of The Joker’s aunt raising him. It’s not hard to figure out the Joker was abused as a kid, but seeing it happen still stings the little parts of humanity that remain inside me. No one should fuck with kids or puppies period.

I enjoyed this issue for every reason I disliked DARKSEID. I want my villains to be evil for a reason, not just because. Also, Kubert reveled in the madness of raising a gorilla and making him the Joker’s Robin. And the biggest joke of all is that when all was said and done, this was just another laugh for the Joker to have at the expense of his own humanity.

Why? Just…why? BIZARRO hasn’t done shit in the DC Universe before now, why did we have to bring him back and in such a…temporary form at that. That’s right Bizarro’s genesis is also his destruction.

Keep in mind I have deep a prejudice against easy silver age trappings like Bizarro’s backwards speak.  So it was going to take a lot to get me to like a character that even Grant Morrison couldn’t warm me up to. The backwards speak is gone, but so os Bizarro by the last page.

Essentially Luthor moves his Kryptonian DNA cloning clinical trials from animal testing to Phase I (that’s human testing on people who are healthy for anyone not married to a clinical data specialist). Fisch does an admirable job with the page count afforded to get us to empathize with the wide-eyed cherub injects with his Bizarro juice, but again he’s just an expendable element in an expendable story. Some Luthor gadgets chase the mad creature around before Luthor melts it with sun rays (opposite – get it).

The only reason I think this book exists is the fact Luthor is hatching another labeled B-O. But why would he name it Bizarro before this one went bizarro? Uhmmm…moving on.

Literally moving on, week 2 just dropped. Let me go write some reviews that will actually help when you get to the store this week instead of remembering when.