Dear Rob,
People often ask, “Chris, to what political party are you affiliated? I’m hard pressed because I think aligning yourself with a political party is like deciding between whether to self pleasure with steel wool or rock salt. What should I tell people?

You should tell people its none of their fucking business and then punch them vigorously in their sex parts. But if spirited debate is what you’re after there is no better place for civility and cool heads than talking politics.

If someone asked me the question, I would sit down next to them as they were weeping from their genital pummel and explain the current two party system is very much like NASCAR. Where once NASCAR was about racing the two party system was about running an efficient government, both are now merely about hollow cash grabs that come from kowtowing to corporate masters. You simply can’t see the logos stitched on the inside Congress’ clothing.

Republicans, less Federal Government. Democrats more. That’s it, all this class, sociological and theological bullshit has been slathered on over time as the parties grew and cancerous greed spread throughout their ranks.

Being part of a political party today is suicide for this country. We are not thinking about the BEST candidate, we are voting for the person who gets the largest endorsements and thus most media coverage.

Great Question Aaron,
But that was not just one man. To answer this question we have to go back to the 1930’s when many of the 1950s lyrical geniuses were born.

As we all know this was the time back when America was in the middle of a deep deep depression. Food was scarce as America tried to find a bottle of Paxil and many people including fetuses went without the proper nourishment.

Scientists have proven that lack of fetal nourishment causes an inflection called Suipdos Lyricistsia where one simply can’t match together real words in a poetic manner.

This condition was exacerbated because there was little entertainment until television. Since sex made children every time, the radio is stupid and most AMericans were illiterate these nonsensical ramblings beat the alternatives.

And thus 50’s rock was born – malnourishment and illiteracy thank you.

Dear Rob,
Not me, but a friend of mine says it burns when he… Wait, I have a better question. When Hall & Oats sang, “I can’t go for that”, what was “that?

And was it the same “that” Meatloaf was singing about in “I won’t do that”? 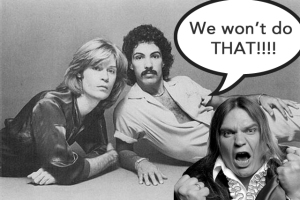 Tell your “friend” for that burning issue sometimes the old remedies are the best remedies. I remember how my Grandmother would relieve what she called the “Pit of Fire.”

1) Step one, tap a fine a sturdy maple tree aged 250 years.
2) Tap 20% above the base. 19% the maple is too acidic. At 21% the PH levels will exacerbate the PoF.
3) Apply junk directly to tree for three days. YOU MUST NOT MOVE FOR 3 DAYS!! Have family and friends bring sustenance and remove waste.